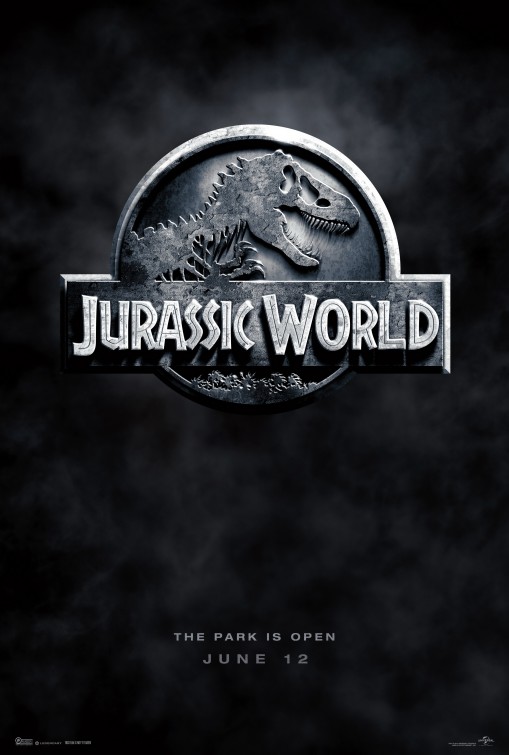 Ben
Jurassic Park is one of my favourite films of all time. Given the impact that Steven Spielberg has had on the world of movies, it is no small feat that this film ranks near the top of his resume. When Jurassic World was announced, I was somewhat skeptical. This series has never been able to capture the magic of the first film again, even when Spielberg was still in the director’s chair. Nevertheless I was still willing to give this film a chance.

I actually really liked the premise of Jurassic World. It has been years since the events of the first film and there is actually a park full of dinosaurs operating where the original island was. Everything is running smoothly until a new hybrid dinosaur (presented by Verizon) gets loose and starts to run amok. I think having the park set up and running was a really smart way to reboot the series. It seemed fresh and fun, and ensured an abundance of eager park visitors for the wayward dinos to munch on.

Of course, there aren’t just random park goers for the viewer to enjoy. Some of them we actually need to meet in order to care if they get eaten. Bryce Dallas Howard stars as Claire. She runs the new park and tries to keep things under control when they turn to crap. She is a business woman with no time for a personal life. Which is ironic that she is welcoming her two young nephews (Ty Simpkins and Nick Robinson) to the park while their parents go through a divorce. Also along for the ride is raptor trainer extraordinaire, Owen Grady (Chris Pratt). He is somewhat of a dinosaur expert on the island and apparently had a date once with Claire, which ended badly because he wore shorts. So these are the humans we’re meant to care about. After 30-40 minutes if introduction, it is time for some destruction.

This is where Jurassic World delivers in spades. The action is top notch, and is the first film since the original to be able to capture that dinosaur awe inspiring experience. Chris Pratt has the right amount of charisma to keep you interested. The kids are fine and Bryce Dallas Howard has decent chemistry with Pratt to make you interested in their predicament. To be honest, I don’t really care about the actors. I’m here to see dinosaurs destroy things, and this film delivers.

There was quite a lot of backlash towards this film when it was released. I didn’t really understand the negativity though. I thought the revamped park and having Chris Pratt be a raptor trainer (something that pays off during the climax) was enough of an update to feel fresh. Pratt & Co. are interesting enough to not want them to get eaten. This film is a fun time at the movies. I don’t think any film will ever capture the experience of watching the first film again, but Jurassic World certainly comes the closest so far.

Sally
Despite being burned by parts two and three of the original Jurassic Park trilogy, I had fairly high hopes for Jurassic World. It had been 14 years since we’d last visited the park, and I was interested to see if filmmakers could breathe new life into the franchise. Special effects and CGI had also advanced in the intervening decade plus, meaning the wonder and scares might be even more riveting (though for my money, Jurassic Park‘s effects still hold up after all this time). While I was skeptical that the magic of the original could be recaptured, I was willing to give Jurassic World a chance.

Where to start? JW is fun at times, but it’s not a great movie. It certainly doesn’t touch JP, but I’m warmer to it than the previous sequels. I mean, there’s no talking dinosaur dream sequence, so there’s that.

As expected, the CGI effects are great. There are sequences when I longed for some good old-fashioned practical effects, however, I concede that much of the action was going to need to rely heavily on computers. Where I take exception is where CGI is used when animatronics could have easily been incorporated. The petting zoo, whenever the Velociraptors are in their Hannibal Lecter masks… why not use practical effects? There are also several scenes and transitions that look like they were written not to advance the story, but to show off the CGI (Basically, whenever you see a park ride or attraction).

Where the film falls flat is in it’s characters. To be clear, leads Chris Pratt and Bryce Dallas Howard are great, as is Vincent D’Onofrio and much of the supporting cast. The problem is that they’re almost all one dimensional stereotypes. Pratt is literally an alpha male. Howard is a workaholic, who suddenly become maternal when kids are thrown in peril. D’Onofrio is as obviously villainous as Dennis Nedry, but with none of the glee. Everyone does a great job with what they have to work with. It’s just a shame they weren’t given more.

I could go on in detail about my other quibbles, but I won’t. (Highlights include: Why do there always need to be kids in these movies? Why even bring up that the kids’ parents are getting divorced? What did Zara do to deserve such a pointlessly violent death? How is “ride operator” at a Central American theme park a legit job for an American teenager?) And as much as I didn’t love Jurassic World, it’s not like I won’t being seeing its sequel in theaters. I know– I’m part of the problem. But, even when they’re bad, Jurassic Park movies can still be fun. Plus, it seems like B.D. Wong might get more screen time in the future, so I’m all in for that.