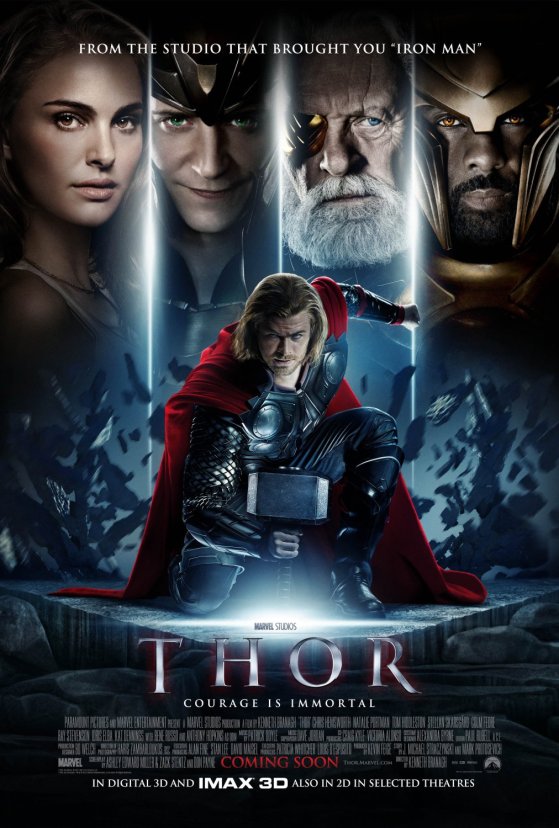 Sally
Could it really be only six years since the Thor arm of the Marvel Cinematic Universe began? Because we just re-watched this in preparation for the third installment, and man, does this movie feel a lot older.Let’s start with the good, because I sometimes feel like these movies get a bad rap. Yes, this film and the character of Thor are more serious than that of the two Iron Man films that preceded it. (I’m purposefully excluding The Incredible Hulk, because I really don’t think of it as part of the MCU.) It makes sense. While the MCU has always leaned heavily into humor, not all of it’s heroes can be wise-cracking wits. I’m totally looking forward to watching a funnier Thor in Ragnarok, but that’s because it feels earned. It’s a natural progression of the character, not a quality shoe-horned into his personality.

Which leads me to the acting. In the hands of a lesser cast, this could have felt like a B-grade action-adventure flick. The performances delivered by leads Chris Hemsworth (Thor) and Natalie Portman (astrophysicist Jane Foster) elevate what is at times very silly dialogue to believable banter. Anthony Hopkins (Odin) lends the film some of his gravitas, and Tom Hiddleston brings just enough of his stage pedigree to the role of Loki. There’s also a perfectly cast ensemble of supporting actors, including Stellan Skarsgård and Idris Elba, that round out this slice of the Marvel world.

I still really enjoy this origin story, but I don’t think it will be one that ages particularly well. The story is rather clichéd (sibling rivalry, seeking parental approval) and fails to shed any new light on these age old concepts. Jane Foster is promoted from a nurse in the comics to a scientist here, but is still reduced to a damsel in distress.  Thor’s eyebrows are a shocking shade of blonde that reveals a character design that’s not been fully thought out (no surprise that this feature is greatly toned down in successive films).

As the MCU has solidified and become more sophisticated, these early introductions start to feel less polished. Thor feels at times unfinished, like it needed just a little bit more time in development before being brought to the masses. Most of these issues were worked out in the sequel, but it’s a shame they weren’t spotted sooner the first time around.

Ben
The first outing for Thor in the Marvel Cinematic Universe is one of the weaker entries in the series. It is mostly saved by the terrific performances of the leads, which hides an average story that we’ve seen too many times before.

Chris Hemsworth stars as Thor, the son of Odin (Anthony Hopkins) and potential god of thunder, if he’s found worthy to wield the enchanted hammer Mjolnir. Thor is from Asgard, a realm that watches over the remaining parts of the universe and protects them, including Earth. Thor is destined to inherit his father’s throne of Asgard, although he is headstrong and stubborn. When he nearly starts a war after years of peace, Odin banishes Thor to Earth until he can prove himself worthy of the throne. There he meets a cute astrophysicist (Natalie Portman) who is studying the strange events that sent Thor to Earth. Thor has to learn the humility needed to be a king and save earth from his brother Loki (Tom Hiddleston), who is jealous of his brother’s ascent to the throne.

The story of a jealous brother exacting revenge on his sibling or a future king learning how to rule is not new. The story is something we’ve seen many times before as far back as Hamlet. What saves this movie from being completely forgettable is the standout performances of Hemsworth, Hopkins and Hiddleston. They work together really well. This is obviously expected from someone like Anthony Hopkins, who has long been considered one of the best actors of his time, but it’s Thor and Loki that really impress. The two newcomers are perfect in their role as the hulking future king and his duplicitous brother. I really enjoyed how Marvel explained the Norse mythology used to create these characters. The Asgardians are shown to be aliens, but worshipped as gods by Vikings in the Middle Ages. I thought this was a really intelligent way to explain how these characters could exist and not actually be gods.

There were some negatives here. Natalie Portman is wasted in her role and ends up being not much more than a damsel in distress. Her scatterbrained assistant (Kat Dennings) is also not really needed. She is shoehorned in to be comic relief, but it isn’t necessary, as Thor’s first experiences on Earth give us more than enough comedic moments. Idris Elba also feels like he needs more to do in his bit part as the gatekeeper of Asgard. Although, to be fair, Elba was nowhere near the name he is now when this film was originally released.

The good far outweigh the bad though. This is a solid first outing for Thor and his super Norse god friends.