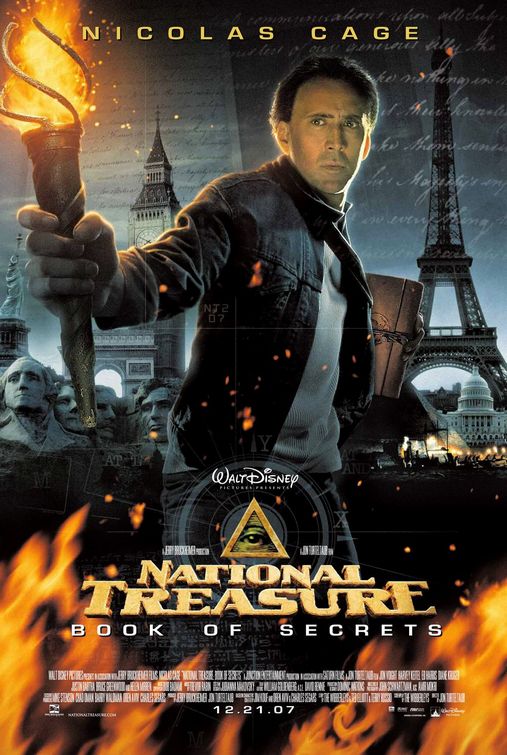 Sally
After repeated viewings of National Treasure, I was willing to bite by the time this sequel was released. If I remember correctly, I even saw Book of Secrets in the theater. And this was back when I maybe went to the movies five or six times a year, so that’s really saying something.

I’ll cut to the chase: Book of Secrets is more of the same, just with foreign locales and a nod to Native American culture. Much of this movie plays into the “lazy sequel” stereotype that plagues too many franchises. However, I have a hard time faulting this movie for it. If this were any other sequel I’d have no problem ripping it apart. Whatever it is about these films that keeps me from criticizing them too heavily, it’s working.

Book of Secrets picks up with our heroes a few years after the events of the first film. Ben Gates (Nicholas Cage) and Abigail Chase (Diane Kruger) have predictably split in the intervening years. (No easier– or more manufactured– way to recreate the romantic tension between the characters than a nasty breakup!) After proving his family wasn’t crazy in the first movie, Gates must now clear their name after his great-great-grandfather is accused of orchestrating President Abraham Lincoln’s assassination. Because of course this one family is tied to multiple moments of extreme historical importance, like some action-adventure bent Forest Gump. Then there’s Riley (Justin Bartha), who has blown through his millions and is unable to capture the public’s attention with his new book. Throw in Gates’ bickering, divorced parents (Jon Voight and Helen Mirren) and we’re off running!

Again, there is nothing new going on here. But I just can’t seem to hate these movies. This franchise has hit upon the right combination of action, humor, and adventure that makes me almost forget that I’d probably rather be watching Indiana Jones. Whatever it is, I keep coming back for more. In fact, where’s the third installment of this franchise? I want to see Nick Cage stealing Dorothy’s ruby red slippers from the Smithsonian, or something.

Ben
This follow to the very entertaining National Treasure certainly doesn’t reinvent the wheel in any way. It gives its audience exactly what they saw in the first one, just on a grander scale. While the first film was mostly set in the east coast of the USA, National Treasure: Book of Secrets has more of a global feel, taking Nicholas Cage and his crew all the way to Europe.

The film picks up a year or so after the events of the first film. Ben Gates (Cage) is enjoying a modest life living off the proceeds earned from their treasure hunt in the first film. While financially he is doing fine, his relationship with Abigail (Diane Kruger) has been rocky. His trusty sidekick Riley (Justin Bartha) has turned himself into a minor celebrity, writing a book about the exploits of their last adventure and wasting his newfound fortune on unnecessary (some would say) luxuries like a Ferrari. When someone (Ed Harris) accuses Gates’ great-great-grandfather of being involved in the assassination of Abraham Lincoln, Ben gets his crew back together, including his bickering parents (the returning Jon Voight and the always awesome Helen Mirren), to clear the family name.

Like I said, this film doesn’t add anything spectacularly different to the genre. It takes what worked in the first film and gives us more of it. There is more adventure and more great actors for the always kooky Nicholas Cage to play with. His interactions with Diane Kruger (mostly their romantic bickering) is one of the film’s highlights, as is his chemistry with faithful sidekick Justin Bartha (AKA: the most sober one in The Hangover). Ed Harris is fine as the bad guy, but he is nowhere near as menacing as Sean Bean (who is??).

These National Treasure films get panned a lot of the time and I don’t understand why. They are fun adventure films and the closest thing we have got to Indiana Jones since Harrison Ford donned the fedora in the 80s. By no means am I saying that these films are on par with those classics, but the spirit of Indiana Jones is certainly alive and well throughout these movies.

National Treasure: Book of Secrets is as good as its predecessor. It gives us more of what the target audience wants. Go in with the right expectations and you won’t leave disappointed. It’s a fun adventure ably led by the always kooky Nicholas Cage.