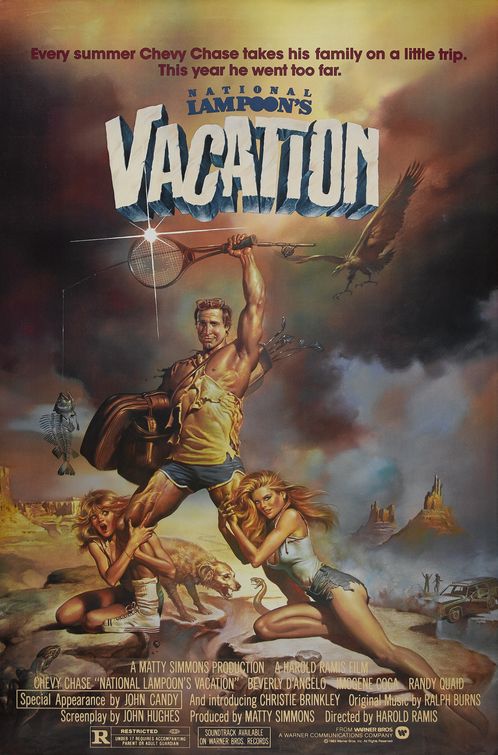 Sally
National Lampoon’s Vacation is a comedy classic. I always remembered it being great, but it wasn’t until re-watching it this year that I really started to appreciate it. When I first saw it around age eleven, I was only vaguely aware of star Chevy Chase’s body of work. I had no idea who its director, Harold Ramis, was. John Hughes, who wrote the short story this is based on, was a name I don’t think I’d even heard at that point.

So it’s both surprising and completely not surprising that all these men were somehow involved in Vacation. This is probably my favorite Chevy Chase movie (Three Amigos is up there, thanks to his brilliant costars). Harold Ramis’ knack for pairing absurd visuals with dark subject matter is evident throughout (Aunt Edna’s dead body strapped to the top of the Griswold’s car is a clear predecessor to Bill Murray’s suicide montage in Groundhog Day). And of course, the thread of heartwarming devotion to family points to John Hughes’ influence.

Beyond this all-star comedy team, Vacation is also filled with a cast of quirky characters who more than deliver on the funny. I remember watching this as a kid and falling in love with Beverley D’Angelo as Ellen Griswold. She’s very much plays the straight woman to Chase’s goofy and hapless Clark, but she’s brilliant at it. There are also great comedic cameos from the likes of John Candy, Eugene Levy, Randy Quaid, and Brian Doyle-Murray that add even more weirdness to this family car trip. This movie also features a cameo from a very young Jane Krakowski. (I think it was a huge missed opportunity to not bring her back for the recent Vacation sequel starring Ed Helms.)

As a kid, Vacation was somewhat of a fantasy. My family’s vacations were almost exclusively car trips like this one, but no where near as crazy. The closest we ever came was when we moved from Maine to California, and our car almost broke down in the middle-of-nowhere, West Texas. But as an adult Vacation brings up nostalgia for those hours spent in the backseat on the way to historical homes, National Parks, and small amusement parks. The actual driving wasn’t very fun, but the destinations always were; Vacation perfectly captures this.

Ben
I have fallen really behind in writing my reviews, so much so that we actually watched this movie months ago. Normally it is really bad and I have no memory of the film I am reviewing, but in the case of National Lampoon’s Vacation, it has turned to be a happy accident as I can now compare it to the recent reboot/sequel starring Ed Helms.

I think we all know the plot of this great comedy. Chevy Chase is Clark, patriarch of the Griswold family. He wants to spend some quality time with his family and decides to go on a cross-country road trip to a theme park in California called Walley World. What ensues is a series of misadventures that would tear any family apart, if not for the contagious enthusiasm of Clark. From a nutty uncle (Randy Quaid) and dead elderly aunts, the trip turns out to be a trial for the Griswolds, ending with one of the more perfect finales I can think of for a comedy.

The recently released sequel tries to replicate the road trip story of the original, but misses the mark so much. It is filled with not much more than a series of gross out scenarios, and much of the funnier moments were covered in the previews. It was a massive disappointment, because this movie is one of the best comedies ever made. It is a shame it is tarnished by now being compared to the unnecessary reboot/sequel. Although, in saying that, many of the Griswold adventures that followed would not be able to live up to the greatness seen in this first one. The only one that comes close was the underrated Christmas Vacation.

Of course this movie is nothing without the enthusiasm of Chevy Chase. He gives his all in the role, and it is by far his best solo movie (I’m a huge Three Amigos fan, so that will always be his best in my opinion). I think we have all had that moment when your parents just want to have a fun family vacation and nothing goes right. Whether it is the weather, moody teenagers, or some other unforeseen circumstance, we can all relate to Clark. He just wants to have a fun holiday with his family, and it seems as if the universe is conspiring against his wishes at every turn. This train wreck of a family vacation is like a car crash that you can’t stop watching. I think what makes it so endearing is that the audience can totally see themselves in a similar circumstance, which makes the film very relatable, which is not surprising given the movie was written by John Hughes. He is the king of making believable characters in extraordinary situations. He normally gets associated with teen flicks like The Breakfast Club, but his skills definitely cross over to this family vacation comedy.

I was also surprised to learn this was directed by Egon Spengler himself, Harold Ramis. This is like a comedy dream team. Chevy, Ramis and John Hughes, what could go wrong? Spoiler alert – Nothing. This is a perfect comedy and still hilarious over 30 years later.