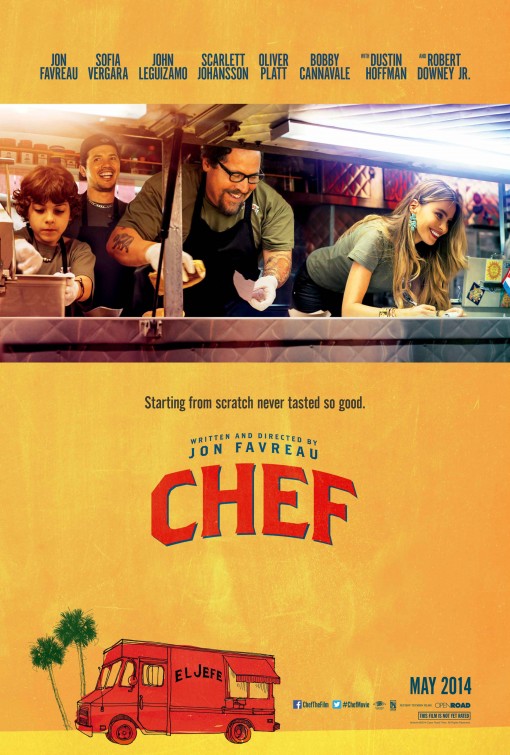 Chef is a “back to basics” turn for director/writer/star Jon Favreau after directing several big budget blockbusters. Favreau plays Carl, the head chef at a fancy LA area restaurant. Carl is beyond bored, longing to switch up the eatery’s stale menu, but is thwarted by restaurant owner, Riva (Dustin Hoffman). After a Twitter war and public blow up with a food critic (over molten lava cake, of all things), Carl gets fired. Unsure what to do next, he’s persuaded to run a food truck, serving up authentic Cuban fare.

Like I said, this film will leave your mouth watering. Since watching it I’ve been searching for Cubanos in Sydney. (And coming up short. Please send me recommendations!)

Food aside, Chef really hinges on the relationship between Carl and his young son, Percy (Emjay Anthony). The two have great chemistry, something that isn’t always apparent with child actors. I especially loved the scenes where the two are cooking together, with Percy enthusiastically assisting his dad in the food truck. It reminded me of when my mom taught me to operate a hot glue gun and a wood burner. I was excited, because in my young mind these tools were extremely dangerous. Finally being old enough to be trusted to use them was a big deal. I know this isn’t exactly the same as giving a kid a proper kitchen knife, but Carl’s stern warnings to Percy about respecting the knife rang true to my childhood experience.

Normally, I’d have a bone to pick with Chef‘s casting of its women characters. Scarlett Johansson plays Favreau’s sort-of girlfriend, and Sophia Vergara his ex-wife. Male comedians casting women way out of their league as their partners is a pet peeve of mine. However, as someone who has no interest in cooking but loves food, these pairings makes perfect sense. I totally believe that Carl could get these two insanely beautiful women on his culinary skills alone. (Did I mention the grilled cheese sandwich he makes?)

Chef is a fun, heartwarming father-son story with lots and lots of yummy food scenes. I definitely recommend it. Just not on an empty stomach.

Ben
Do yourselves a favour, don’t watch this film after just eating. The cooking scenes featured in this culinary comedy will make whatever meal you’ve just consumed feel incredibly inadequate. It will also likely make you hungry all over again, so that’s probably not great for the waistline. The grilled cheese sandwich made by Jon Favreau’s character is particularly mouth-watering. Outside of the food, this is still a fun comedy that doesn’t feel like you’ve wasted an evening after watching it. The search through the streets of Sydney for the perfect Cuban sandwich that follows is a different story.

Favreau (who also directs) plays Carl Casper. He is a head chef at a fancy Los Angeles restaurant owned by a rich fat cat named Riva (Dustin Hoffman). When Riva meddles with his menu once too often, Carl quits, but not before having a meltdown in front of the restaurant guests. The YouTube video that follows makes it very difficult for Carl to find work again. In order to make ends meet and rediscover his creative chef juices, Carl decides to start his own food truck. He flies to Miami to pick up a truck, and with the help of his ex-wife (Sofia Vergara) and her new hubby (Robert Downey Jr.), Carl is able to finance the start-up costs. He decides to specialise in Cuban sandwiches, as he is in Miami. Carl decides to drive the truck across country back to LA, where he is based. The road trip will also serve as a way for Carl to bond with his long neglected son, Percy (Emjay Anthony), who has been living in Miami with his mother. The cross country trip exposes Carl and Percy to all sorts of culinary delicacies, which opens up Carl’s eyes to what the USA has to offer in terms of food.

This film does feel like it belongs on the Food Network. That’s not a bad thing, that channel is amazing. I love my food, and this movie delivers some of the best cooking sequences I have seen. Favreau had been trained by renowned food truck operator Roy Choi, and it shows. Favreau looks like a chef, and not just due to his enormous girth. The way he slices and prepares food, it looks like he knows what he is doing. It is one of those small things that adds to the believability of a movie. I also loved that Favreau brought a few of his old Marvel buddies along for the ride. Downey and Scarlett Johansson both feature in Chef. They have small roles that ended up being a little distracting, but not enough for me to dislike the film.

What makes this film, though, is the relationship between Carl and his son Percy. The two have terrific chemistry, which happens regularly with Favreau and his younger actors. Some of the best scenes of Made are when he is interacting with his step-daughter. This film is no different. The two bond like any father and son. The junior learning the ropes of cooking, while he teaches his not very tech-savvy dad about the internet. Their relationship is what makes Chef work. Everything else is just a bonus.

Chef combines some awesome cooking sequences with a touching story of a father and son learning to bond again. It is some of Favreau’s best work, which is saying something. Made and Swingers are great films, and this is definitely their equal.