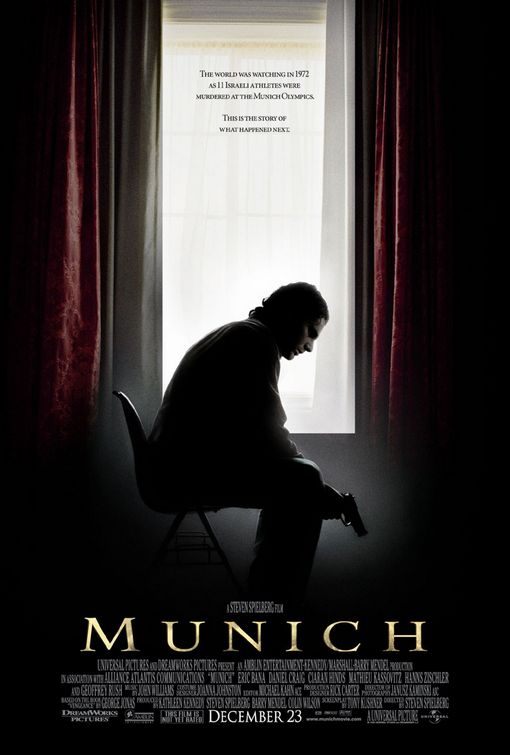 Ben
I really have no idea what to write about this film. If it wasn’t directed by Steven Spielberg or starred Eric Bana, it likely would not have even been on my radar at all when it was released. It is a heavy film and I really wasn’t in the mood to watch it when we did. Because of this, I didn’t appreciate it like I probably should have.

Munich chronicles the murder of 11 Israeli athletes during the 1972 Olympics in Munich, and the subsequent hunt for the killers. Leading the operation is Avner (Eric Bana). He assembles a small squad of men to hunt down these killers. The Israeli government have basically given him free reign to do what he wants, as long as they don’t know about it.

The one thing I did like about this film is that it shows Bana questioning if his team is any better than the men they are hunting. It raises some interesting morality questions about the killings and subsequent revenge that followed.

I really don’t remember much about this film. It did not grab me at all. I should probably re-watch it when I am in the mood for something dramatic, but it was lost on me for my first viewing.

I can’t say if  I like or dislike Munich. I’m sure it is very good, but it didn’t grab me at all the night we saw it. I want to give it another chance as I have heard only good things about it, but I have got a few more films to watch before we get around to second viewings. We are only just about to finish M.

Sally
I don’t really know how I feel about Munich. On the one hand Steven Spielberg manages to craft a story that asks some difficult questions. On the other hand, I found it incredibly boring at times.

The events leading up to Munich are ones with which I am very familiar. My parents have always been big Olympic fans, with prime time event coverage being mandatory family viewing. Mom and Dad also did a great job of explaining Olympic history to me and my sister, providing as much historical context as they could to their memories of sporting events. The events of the 1972 Munich games were often discussed. I became aware of this tragedy when I was about the same age my parents were when it occurred. This is probably why they had no reservations about discussing the topic with me and my sister, and I give them a lot of credit for not shielding us from these darker parts of history.

Oddly though, I never gave much thought to what happened after the Munich Olympics ended. I think I assumed all members of Black September terrorist group were either captured or killed, getting the punishment they deserved. This of course isn’t completely true. Some were killed, but those who were captured were later released following the hijacking of a commercial aircraft. Then of course, there were those who orchestrated the hostage taking, who never even set foot in Germany. Munich is the story of what happened to some of those men, who were hunted down by a former Mossad agent and his team at the request of then Israeli prime minster, Gold Meir.

What I do like about Munich is Spielberg’s nuanced portrayal of the Israeli assassins. The characters often voice conflicted feelings about what they are doing. There is an understanding that they are getting justice for their fallen countrymen, but at what cost? Their assassination attempts sometimes leave innocent bystanders injured or dead. And at the end of the day, if they are killing men because of their religious and/or political views, then are they that much different than the terrorists themselves?

This surprised me, simply because of Spielberg’s Jewish heritage. I expected the film to be completely pro-Israel, with no moral ambiguity placed on the protagonists. It’s refreshing to see a movie that takes a critical look at these events, and acknowledges that political tit-for-tat causes more problems than it solves. Of course, the film has been criticized for this very reason, citing that interviews with the real life men showed little, if any, conflict over what they did.

Other than that, I can’t say much about the movie. Munich is beautifully shot… at least the few scenes I can remember were. I sometimes feel as if Steven Spielberg is on autopilot at this point in his career. He still knows how to craft a competent story and where to place the camera, but he doesn’t bring anything new and exciting to the screen with the frequency with which he once did.

Maybe a second viewing of Munich is needed for me to fully appreciate it, but for now it will have to sit in the “slightly disappointing” category. The subject matter is too heavy to revisit right now.