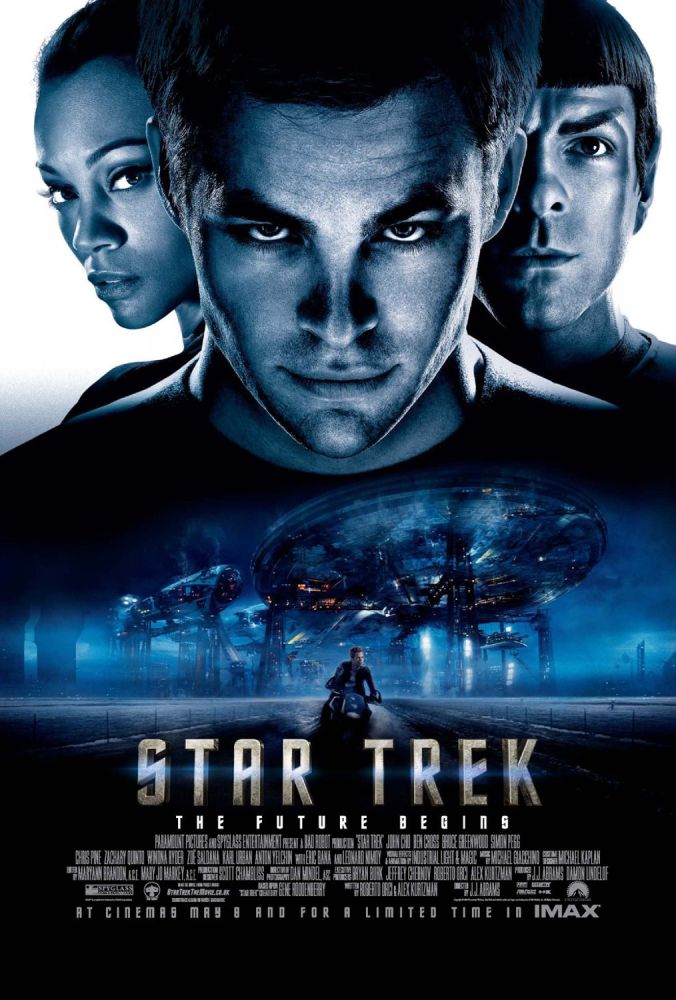 Ben
When I was growing up, people were generally in two camps when it came to science fiction franchises. You were either team Wars, or team Trek. I don’t think you need to think very hard in order to figure out which group I belonged in. I was team Skywalker all the way. I found Star Trek to be a little too boring and their fans took themselves way too seriously. In saying that, as I’ve gotten older I’ve been able to appreciate Star Trek a little more and was more than happy to give this quasi-reboot a chance when it was released.

This was mostly due to JJ Abrams. The TV shows he has been involved with have been pretty great, and his first directorial effort saved the Mission: Impossible franchise. I was excited to see what he could do with an iconic franchise like Star Trek. Thankfully, I wasn’t let down. Abrams has assembled the perfect cast and borrowed a little bit of Star Wars whimsy to turn a tired franchise into something very exciting.

The film opens with a Federation ship stumbling onto a Romulan mining vessel that has just traveled back from the time when Shatner and Nimoy roamed. The Romulans attack the ship and end up killing young, up-and-coming Star Fleet officer George Kirk (Chris Hemsworth) about 40 years too early. Consequently, young James T Kirk (Chris Pine) never knew his father and barely ends up in Star Fleet Academy. This is the story of Kirk starting out in the academy and eventually running into Nero (Eric Bana), the man responsible for his father’s death.

What an exciting film this is. It is so entertaining and fun, led by the charismatic Chris Pine, who is great as Kirk. It would have been so easy for him to just do his best Shatner impression and leave it at that, but Pine makes the role his own. He is charming, funny and likable. The audience is always rooting for him to do well, and that’s essential to the character as we need to be on his side for the movie to work. It could not have been easy for Pine to step into this role, but he does an amazing job as Kirk.

Another actor with big shoes to fill is Zachary Quinto as the iconic Spock, but here is yet another example of perfect casting. Quinto looks uncannily like Leonard Nimoy and is brilliantly able to capture the emotionless and logical Spock. The whole crew of the enterprise does such a good job inhabiting roles made famous by other actors nearly 50 years ago. Simon Pegg is particularly great as Scotty.

This reboot/sequel reinvents Star Trek for a new generation, making it fun and more exciting than it has ever been. It accomplishes a very difficult task, it makes you accept an entirely new cast playing characters that have been lived for decades. It makes you excited to see their next adventures.

Sally
I’m going to let you in on a little secret: I sometimes love Star Trek more than I love Star Wars.

Ben hates it when I say this. To him this is the highest form of blasphemy and possible cause for divorce. But I like what I like, and sometimes I want a space adventure that’s a little less fantastical.

It actually makes a lot of sense that I’d be a Star Trek person (I stop short of referring to myself as a Trekker*; Harry Potter is my fandom of choice.). Though my parents were the ones who introduced me and my sister to Star Wars, they’ve always seemed to have more affinity for Star Trek themselves.

My dad has watched reruns of the 1960s TV show for years. You’d think the hooky special effects and overacting would have soured me on the franchise, but I went on to love Batman despite growing up on that original series. My tolerance for silliness is extremely high, I guess. I also remember Dad watching many of the original movies on TV. He certainly talks about Wrath of Khan a lot, but I specifically remember watching the scene from The Voyage Home where Scotty and Dr McCoy give some guy the formula for transparent aluminium. Finally, my mom regularly watched Star Trek: The Next Generation, which I notably remember for LeVar Burton’s role as Lt. Commander Geordi La Forge, and that one time I watched the show and my mom pointed out that Whoopi Goldberg doesn’t have eyebrows.

All this to show that I do have a relationship with Star Trek that goes back nearly as far as that of the one I share with Star Wars. I’m firmly in the “you can be a fan of both” camp– at the same time and for different reasons, even! Many of you will disagree with me, I’m sure, but I believe there are more of us out there. People who desperately want to join Star Fleet Academy and be a Jedi.

So on to my review of the 2009 JJ Abrams film. Short answer: I love this movie. It’s got everything I want from a summer blockbuster—great cast, solid story, exciting action—plus, it also employs a smart use of time travel. Yay!

In fact, Star Trek hinges on the time travel concept, incorporating it into its opening scenes. The story essentially resets the entire universe, creating a new timeline that diverges from the old Shatner, Nimoy, et al stories at the moment of James T. Kirk’s birth. You may feel this is cheating (something Abrams anticipated and calls out in one of the film’s more self-aware lines), but I think it’s a smart move. Re-establishing well known characters is nearly impossible, especially when those characters are played by actors who are now beloved. Trek splits the difference, allowing the screenwriters to take some liberties with the characters, while showing the required deference to the originals.

While I love the time travel aspect, where Trek really shines is in its cast. There isn’t an actor here that I don’t love. Everyone embodies the spirit of their original counterparts, but is given enough leeway to make the role their own. Particular standouts are Chris Pine as Kirk and Zachary Quinto as Spock. These characters are long established as best friends, and finally getting to see this relationship build is beyond satisfying. Pine and Quinto have amazing chemistry, adding to the enjoyment of watching them verbally and physically spar. My other favorite is Karl Urban as Dr Leonard “Bones” McCoy. This is the role that made Urban one of my many imaginary boyfriends, though I lament the fact that he quickly shaves the awesome stubble he sports in his introductory scene.

The only negative thing I can say about Star Trek is that it’s way more brawn than brains. Ben and I have caught the odd TGN episode since this film’s release, and I was struck by the amount of talking versus action. This may be due to the differences between film and television, or the huge disparity in budgets, or even that audiences were different in the 90s than they are now. Whatever it is, it just feels like Star Trek should be more of a thinking man’s science fiction adventure. Star Fleet is tasked with exploration—observing and reporting but not meddling in alien affairs (a directive they do not always comply with). They’re meant to champion interactions distinctly different from the colonial bulldozing of Earth’s past, promoting positive interactions with new cultures and supporting peacekeeping missions.

This Star Trek movie displays less of that sensitivity and nuance. But then again, the Enterprise crew are up against a genocidal maniac who is literally bent on world destruction. That may not be the best time to sit down and negotiate.

*Trekker is the preferred term for Star Trek fans, as Trekkie is considered to be derogatory. Of course, there’s debate about this among the fandom.