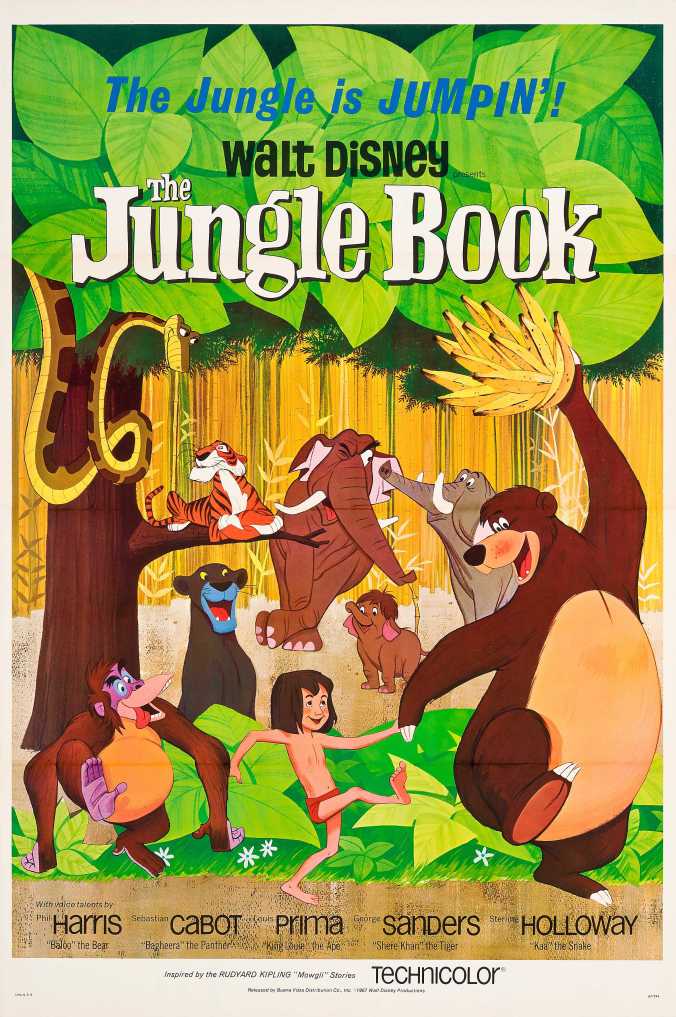 Ben
For the longest time I thought The Jungle Book came out in the 1980s because I saw it in theatres when I was a kid. It was only a few years ago that I realised this was actually so much older than that (1967 to be precise). The idea of re-releasing a film in theatres was foreign to six year old Ben. This was also one of the few Disney movies I owned on VHS, so it clearly spoke to me. Growing up, Disney films were mostly about princesses and singing, not the kind of thing a young boy into Star Wars and Indiana Jones was going to be attracted too. It wasn’t until Disney started making films like Aladdin and The Lion King that I begun to enjoy them.

Watching this film again, for the first time in a long time, the animation does look quite dated. Despite that, the story still holds up. The characters are a lot of fun, particularly Baloo the bear. Most of the laughs come from him. I’m sure most of you know the story of Jungle Book, where the man-cub Mowgli, raised by wolves in the jungle, must be returned to the man village so that the wicked human hating tiger, Shere Khan, can’t kill him. The wise panther Bagheera volunteers to take Mowgli back to his village where he will be safe. Along the way, they meet the lovable Baloo the bear, and have run ins with King Louie the ape, Kaa the villainous snake, and a squadron of marching elephants.

This film is a lot of fun, and I am always impressed when a film that is nearly 50 years old can still hold up today and be relevant. As society changes over generations, it is hard for some films to remain current, but this film does it with ease due to its lovable characters, an entertaining story, and a super catchy soundtrack. My only negative is the end. Mowgli is so against returning to the man village until he sees some cute girl and starts flirting with her. It should be ‘bros before hoes’, but Mowgli is like ‘Seeya, Baloo, this chick is hot’.

The soundtrack is definitely the highlight for me. When I first heard that there was a live action remake being made, I was hoping they would keep the songs in it. The songs from Jungle Book are what make it great, particularly ‘Bear Necessities’ and ‘I Wan’na Be Like You’. You’ll be glad to know that the new version does do renditions of both of these songs, and it is all the better for it.

Disney’s story of Mowgli the man-cub is still entertaining today, and you’ll be glad to know that the new one is also brilliant (we saw an advance screening last week).

Sally
I didn’t often see movies in the theater when I was a kid. The cost of movie tickets for the whole family was typically outside my parents’ budget. Also, the nearest theater was a half an hour away, making the cost of gas a factor in our night out. (Concessions were out of the question; we smuggled in outside food.)

So when we got to see a movie on the big screen it was a HUGE deal. The novelty of this type of outing means that I have some vivid memories of seeing certain films in theaters. One of those memories is seeing The Jungle Book sometime in the early 1990s during a theatrical re-release.

Actually, it’s not a memory of watching the movie, but the excitement of getting to see the movie. I knew The Jungle Book was coming to cinemas thanks to TV commercials, and desperately wanted to see it. I vividly remember driving past our “local” theater and seeing the movie poster hanging outside. “The Jungle Book! I want to see that,” I squealed, my sister eagerly joined in with her desire to go too. Then, to our surprise, Dad turned into the theater parking lot. My sister and I started screaming, “We’re seeing it! We’re seeing it!” I remember both our parents laughing at us, but I’m sure they were also happy to give us a treat that we so obviously appreciated.

I don’t remember the actual movie on the big screen, but it’s seared into my memory thanks to multiple VHS viewings over the years. The Jungle Book was always a favorite with me and my sister. We loved any Disney movie with an animal cast, but Jungle Book was more fun to watch than movies like Robin Hood or The Fox and the Hound. It also has some of the best, most catchy songs of any animated film.

The Jungle Book has certainly gone down as a Disney classic, but I find myself loving it less as an adult than I did as a child. The story feels very episodic at times, perhaps because it is based on several of Rudyard Kipling’s Mowgli stories. I’m also watching it now with the knowledge that Kipling was a pro-colonial racist. Couple this with the non-diverse casting and some questionable stereotyping, and I can see why some people are nervous whenever this story gets re-adapted.

However, I still enjoy The Jungle Book. As I said earlier, it’s a lot of fun. While it was never my favorite film in the Disney catalog, it does flood me with childhood nostalgia. I don’t remember the last time I was as excited about anything as I was about seeing this movie in the theater as a kid. I may never recapture that level of pure joy again, but it’s nice to get a glimmer of it now and then with the help of DVDs. And there are worse songs than “The Bear Necessities” to get stuck in ones head.