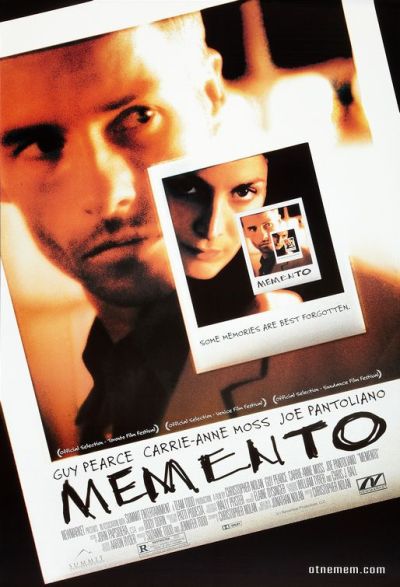 Ben
This is certainly an ambitious film, and incredibly clever. It is a great example of good storytelling and a nice reminder that you don’t need a massive effects budget in order to make an engaging movie. Directed by Christopher Nolan, Memento almost tells two different stories that end up merging into one by the end. I will be going into spoilers for this review, it is going to be very difficult to explain what I liked about the film without going into them a little bit.

Guy Pearce stars as Leonard, a man investigating the murder of his wife. He has no short term memory so any clue he gets about the murderer quickly needs to be recorded before he forgets about it. This is normally done by tattooing information all over his body. The film chronicles Leonard’s investigation, with the help of a cop (Joe Pantoliano) and a woman named Natalie (Carrie Anne Moss), but he is always unsure of who he can actually trust due to his memory problems.

The best part of this film is how it is told. There have been a million movies made about a man hunting down his wife’s killers, but none quite like this. The film is told in two separate stories. The first part is told in chronological order and shown on screen in black and white, while the second story is told backwards and shown in colour. Eventually both stories join each other and the plot makes a whole lot more sense. Telling a generic story like this so differently is what sets Memento apart from other films. It was also one of the earliest examples of the amount of talent Chris Nolan has. This was before he landed the Batman gig, and I’m sure the way he told this story would have influenced the decision to give him such a high profile character like Batman.

Guy Pearce is terrific as Leonard. The movie would not work if you didn’t believe this guy really had no short term memory, and Pearce nails it. He delivers a great performance. It was essential he did as Leonard is in every single scene, usually alone. Pearce gives what is arguably the best performance of his career. Carrie Anne Moss and Joe Pantoliano are good as the potentially duplicitous aids to Leonard. The film does a great job of not revealing their real motives until absolutely necessary. This is quite a skill given the different way each story is told.

Memento is an entertaining and thoroughly original film, and a great example of Chris Nolan’s talent as both a writer and director.

Sally
I first saw Momento in college, before Christopher Nolan was Christopher Nolan. It’s a strange film, staying with me despite that single viewing over 15 years ago. Realizing now that this is the work of the man who has since given us Inception lead me to view the movie in a different light this time around. I remembered it being complex, but I didn’t fully appreciate this complexity until now.

Momento stars Guy Pearce as Leonard, a man suffering from anterograde amnesia. He’s unable to create new memories and relies on an elaborate system of written notes, Polaroid photographs, and tattooed messages to remember his goal: finding the man who attacked and killed his wife. Leonard’s lack of short term memory drives the story, which is told non-chronologically. This adds to the sense of mystery, but also places the viewer as close as possible into Leonard’s shoes.

The creative story structure can be daunting. This is definitely not a movie that you can watch casually or surf the internet while watching. But this is characteristic of most Nolan films, even more mainstream hits such as Batman Begins require a greater amount of attention than your typical action movie. Momento demands your attention from the first scene, but it’s easy to give it. At no time was I bored. (A little confused, maybe.)

Momento isn’t my favorite Nolan film, but I still highly recommend it. It’s especially interesting to watch with his other movies in mind. This movie is very grounded in reality, where many of his best works touch on science fiction or the fantastical. It’s a testament to Nolan’s talent that he can do both so well.