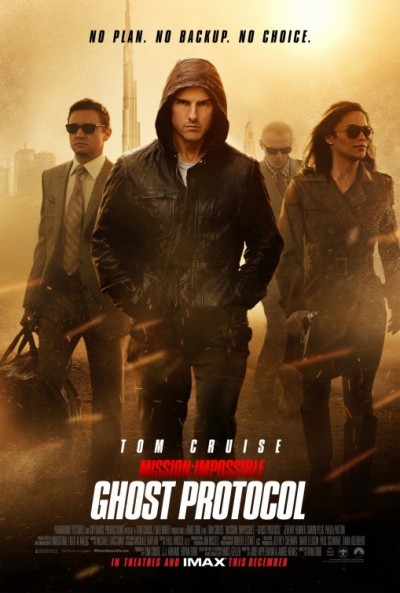 Ben
I was definitely excited for this fourth Mission: Impossible film. After the excellent third installment, my expectations were high for this one. I ended up taking my nephew to see this film in IMAX because they were showing the first five minutes of Christopher Nolan’s final Batman film, The Dark Knight Rises so that was the cherry on top of what I hoped would be a thrill ride in the largest screen in the world (apparently??). It is safe to say my expectations were met. This fourth film manages to combine the thrills of the first movie with the character development of the third. Led by an all-star cast, Mission: Impossible – Ghost Protocol is everything I wanted in a big action popcorn flick.

We meet up with Ethan Hunt (Tom Cruise) getting busted out of a Russian prison so he can do a mission in Moscow. When Ethan and his team are framed for blowing up the Kremlin, IMF enacts the Ghost Protocol, which basically means they disavow all knowledge of the IMF and its employees. Ethan Hunt and his team (Simon Pegg, Paula Patton, and Jeremy Renner) must go underground and attempt to clear the IMF and get them back in business.

This film is one of the best action movies in recent times. The only one that tops it would probably be Fast Five. There is a sequence where Cruise must scale a really tall building in Dubai using some techy gloves that malfunction halfway up. This is the first time since we watched Cruise steal the NOC list from Langley in the first film that I can honestly say that you could have heard a pin drop in the theatre I was in. Watching him scale this building and then cringing every time his gloves stop working is by far the highlight of the film for me. The rest of the movie is a thrill ride from start to finish, particularly the opening set in the Kremlin, but nothing comes close to this scene in Dubai. One of the things this series has done well is get terrific directors for these films. Brad Bird directed this, his first live action film (he also directed Pixar’s The Incredibles). Bird takes over from J.J. Abrams, who was also directing his first movie when he did the third film. I really like that this series is taking a bit of a risk with the people they hire. They are risks that have definitely paid off in the last two films.

I can go on and on about this film, but all you really need to know is if you want to be entertained, you will enjoy yourself. After the last two instalments, I was very excited for the fifth movie which came out last year.

Cruise leads these movies so well and always comes across as a true professional. The man knows how to carry a film and is at the very top of his game here, ably supported by his crew. My only real complaint is the villain (Michael Nyqvist). He had huge shoes to fill after Philip Seymour Hoffman did such an amazing job. The villain is unfortunately not that memorable, but the action and set pieces more than make up for that.

Sally
This is a pretty damn cool movie. It has to be cool, because it’s most iconic scene leaves me tense and shaky every time I watch it, and yet I willingly sit though it again and again. But more on that later.

Mission: Impossible – Ghost Protocol ups the ante, setting itself apart from the first three installments in the franchise. This is slicker, faster, bigger, and funnier film than its predecessors. In some ways it feels almost like a reboot, if it weren’t for the fact that it retains its star and some supporting characters.

What Ghost Protocol does well is weave a number of memorable sequences into the overall plot. The opening scenes follow the team breaking Ethan Hunt out of a Russian prison, a comical bit that is brilliantly scored by Dean Martin’s “Ain’t That a Kick in the Head.” It sets the tone of the film, a well planned action flick with genuine humor sprinkled throughout. I also enjoyed Cruise and co-star Simon Pegg infiltrating the Kremlin (spy gadgets!), and the closing fight between Hunt and the main baddie (Michael Nyqvist).

But of course, the scene everyone remembers is Cruise’s death defying climb up the Burj Khalifa, the tallest building in the world. I’m afraid of heights, so this sequence is incredibly hard for me to watch. Still, I can’t look away. It’s so well shot and acted that I get nervous every time we watch this movie. It’s one of the best action scenes ever, made even more impressive by the fact that Cruise doesn’t use a stunt double (He was securely attached to the tower at all times, but still. It’s super tall. I sure as hell wouldn’t do it.).

Ghost Protocol is my favorite movie in the series. (S0 far, anyway. There’s bound to be a few more in the works.) It’s smart and funny, but never loses it’s edge. I even loved the ending, bittersweet as it is. This franchise may make a Tom Cruise fan out of me yet.