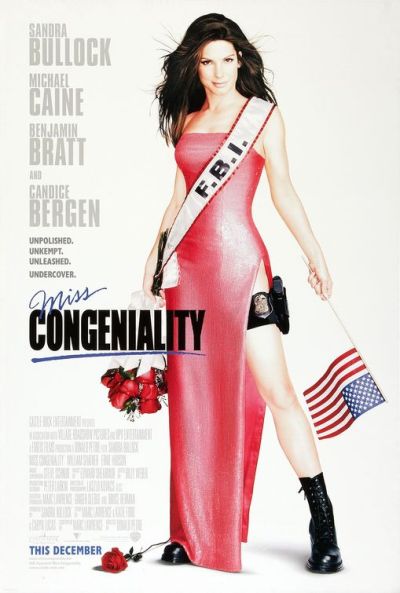 Ben
When Miss Congeniality was released, Sandra Bullock was going back to a tried and true formula that had served her well in the past. After her breakout role in Speed, Bullock became America’s sweetheart in rom-coms such as While You Were Sleeping. In the years that followed she began to experiment with more serious roles like A Time To Kill and Murder by Numbers. Most of these films weren’t terrible, I actually really like A Time To Kill, but they certainly weren’t as well received as Bullock’s earlier work. In Miss Congeniality, she is hitting the comedy circuit again, and it makes me wonder why she ever left. Bullock has a natural comedic timing, and it is a skill that should never be taken for granted. Another great example is her performance in The Heat. She holds her own with the very funny Melissa McCarthy in that film, something not many actresses are able to do.

Bullock plays Gracie Hart, an FBI agent looking for a terrorist known as ‘The Citizen’. They get a tip that he plans to strike at the Miss America pageant so the FBI decide to send an officer into the pageant undercover. The closest they have to a pageant contestant is Gracie, which is not very close at all. Gracie is an unfeminine woman that likes junk food and red meat, not something you would normally associate with the beauty pageant circuit. To bring Gracie up to speed, the FBI hires former contestant coach Victor Melling (Michael Caine). He undertakes the massive challenge of turning the mannish Gracie into a believable beauty pageant contestant (Ok, I’m sure it is not THAT hard to make Sandra Bullock look like a beauty queen). Gracie must now interact with a world she despises in order to catch a terrorist before he blows up the pageant.

Like I said earlier, it is unlikely that it would have been a massive challenge to make Sandra Bullock look like a beauty pageant contestant. The girl is gorgeous, although the filmmakers do a really good job of portraying her early on as the antithesis of these pageant girls, but it is mostly from Bullock’s portrayal of Gracie that she seems to have no trace of femininity in her appearance or demeanour.

This film is a lot of fun. Michael Caine is terrific as Gracie’s tutor, seeing him and Bullock butt heads throughout the film is definitely the highlight for me, as is the appearance of William Shatner as the pageant’s host.

When you see a film like this, it makes you wonder why Bullock would do anything other than comedies. She is so good at them, and is easily able to jump from uptight FBI agent to girly pageant contestant. She plays both sides of her role really well. I understand that she would want to try new things, but she is so good at comedy and one of the few women I imagine that would get asked regularly to do the genre. She is so good at being funny, it is almost a letdown when she isn’t in her other roles.

This film apparently didn’t win over the critics as it currently holds a 42% rating on Rotten Tomatoes. I don’t understand this rating at all, Miss Congeniality is a fun comedy that makes great use of its super cast.

Sally
There was a time in my life when I disliked Miss Congeniality. My family rented it shortly after its release and watched it one evening when I was out. When I returned home, they proceeded to tell me that they referred to the movie as “Miss Con-Sally-ality.” Based on their incessant giggles I assumed the comparison was less than positive.

My assumption was confirmed when I sat down to watch nerdy, socially awkward FBI Agent Gracie Hart (Sandra Bullock) get thrown undercover into a beauty pageant against her will. She is clumsy, brash, masculine, and has questionable hygiene. I was not happy that my family saw Gracie and thought of me. Even Michael Caine transforming her into a conventionally attractive contestant didn’t warm me to the comparison. From then on I did not like Miss Congeniality (and by extension, Bullock).

But you know what? This is not only a great movie, but Hart is a badass who I totally don’t mind being compared to now.

First off, Hart is good at her job. She takes pride in this and never apologizes for being career-minded. I’m still learning how to “sell” myself in the workplace, and aspire to be the type of woman who owns her successes without needing to downplay them or act overly humble. Yes, she lets her male coworker (Benjamin Bratt) take credit for her ideas, but in the end it’s clear that she’s the more capable of the two.

Secondly, Gracie’s not afraid to admit when she’s wrong. When she first enters the pageant world she assumes all the women competing are shallow airheads. However, as she gets to know her fellow contestants she learns that they are kind, complicated individuals from different backgrounds, having varying hobbies, and are, for the most part, intelligent women. Hart goes from snarking behind their backs to becoming their friend and defender. Who doesn’t struggle with these things? Gracie is completely relatable in this way.

Finally, Hart comes to embrace femininity, a trait she previously shunned. I used to be this girl. When I started learning about feminism, I mistakenly thought that anything traditionally girly was terrible. I stopped baking, ditched any clothing deemed too feminine, and decided I would never be a lowly housewife. This was a very stupid thing to think, but I was only 14. Gracie doesn’t seem to think like this, but she’s clearly a tomboy who is uncomfortable in dresses and a bit ignorant about womanly grooming. But by the end of the movie she’s learned to embrace femininity in a way that works for her. During the talent portion she demonstrates self-defense in a very short lederhosen skirt. It’s not a subtle representation of someone embracing both the feminine and masculine, but this isn’t a serious film.

Miss Congeniality is a hilarious comedy with an excellent female lead that I’m proud to be associated with. So what if I’m opinionated and trip over my own feet? I’m also good at what I do, mostly comfortable in my own skin, and learning to be less judgmental of others. Point is, I’m not perfect, just like Gracie. That’s not the worst thing in the world.