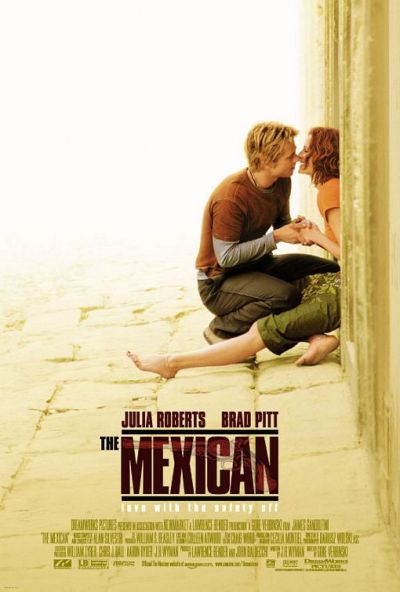 Ben
The Mexican takes two of the biggest stars on the planet and puts them in the same movie together. What could possibly go wrong? When it was released in 2001, Brad Pitt and Julia Roberts were huge stars. I can understand how it would have seemed like a no brainer to put them in a movie together and wait for the box office dollars to roll in. The problem with this film though, is that Pitt and Roberts barely share any screen time together. They play bickering lovers Jerry and Samantha, Pitt spends most of the film getting into trouble hunting down a rare antique pistol in Mexico, while Roberts mostly searches for him with the help of a gay assassin (James Gandolfini).

The scenes between Roberts and Gandolfini are great, and it is amusing seeing Pitt get into one problem after another, but for a movie starring the two biggest stars on the planet The Mexican left me wanting more. This movie is entertaining enough, but not much more than average. The Mexican struggles to decide if it wants to be a comedy, thriller or an action film. There are good aspects of all three genres in this film, but The Mexican never really feels comfortable fitting into any of them.

The few scenes that Pitt and Roberts do share with each other are very entertaining. They play the arguing lovers really well. I really wanted to see them together more because the film really shines when they are together. I also loved the setup that showed how Pitt causing a traffic accident five years earlier has left him at the beck and call of the local gangster (Gene Hackman). It is a very funny and random premise, which I really enjoyed.

The Mexican is an entertaining enough film that fails to utilise it’s A-list leads. They should have shared the screen together far more instead of spending the rest of the film chasing one another.

Sally
I really liked this movie in high school/early college, but hadn’t watched it since then. I remember it being better. It’s not bad, just different than I recall.

Apparently it was a big deal that Brad Pitt and Julia Roberts were brought together for this film. At the time I knew Pitt was popular, but I somehow went through the whole of the 1990s without realizing that Roberts was a huge star. I think The Mexican was maybe the second movie I’d ever seen her in (For the record, I didn’t see Pretty Woman until 2010ish.). Anyway, seeing these two together didn’t rate for me because I didn’t get Roberts’ appeal, but also because they’re hardly share any screen time.

For some reason I remembered them being together for more of the movie. This probably has to do with the poster, which paints the film as a generic romantic comedy. It’s not. Pitt and Roberts play a dysfunctional couple who spend almost the entire duration of the movie on separate road trips. Pitt is wandering around Mexico searching for the titular “Mexican,” a valuable antique gun, while Roberts is kidnapped and taken to Las Vegas by a hitman. They are reunited in the end, but anyone expecting to see these two actors fighting and flirting will likely be disappointed.

The best part of The Mexican is the retelling of the gun’s legend. The pistol has almost mythical origins, with the story of its making changing as different people tell the story. That said, this isn’t enough to sustain the film. Brad Pitt’s storyline quickly becomes boring. Roberts’ half plays out better, thanks to James Gandolfini’s portrayal as the kidnapper who she eventually befriends. There’s a lot of humor, but it’s less funny than I remembered.

The Mexican is one of those movies that didn’t age well for me. It still holds some fun, but I’m at a loss for why I liked it enough to purchase it. Brad Pitt isn’t nearly attractive or funny enough in this role and is largely wasted. Julia Roberts also seems underused, or maybe I still don’t get what makes her so great.