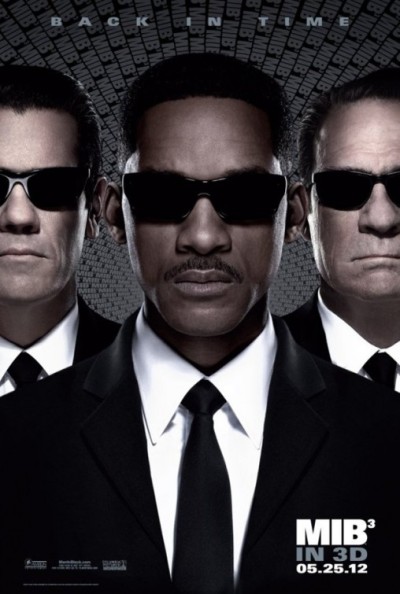 Ben
This is a return to form for the Men in Black franchise after a lacklustre second effort. The third film manages to recapture the charm that was present in the first film.

Will Smith returns as a now veteran MIB Agent J, alongside him is his perpetually grumpy partner K (Tommy Lee Jones, basically playing himself). When Boris the Animal (Jemaine Clement) escapes from prison and gets a hold of a time travel device, he makes it so that K is killed early on in his MIB career, leaving Boris to never get arrested in the first place and is able to carry out his plans of world domination. When J realises what is happening, he must go back in time to the swinging 60s and stop Boris from carrying out his plan. He must also convince a younger K (Josh Brolin) that he is not crazy and needs his help.

This film will always be special to me, we watched it while holidaying in New York. The city plays such a central role in all of the Men in Black films and it was a bit surreal to be watching this film in the city it is set. I am sure this is a problem all New Yorkers have when watching movies that are set in their city. The climax of the film is also set at Kennedy Space Centre in Florida. Sally and I were there a few weeks before seeing this film, which only added to the enjoyment of the movie.

Our holidaying aside, this film is very entertaining. I really liked the idea of sending Smith back in time to work with a younger K. It was a cool way to switch things up. Now J was the grizzled veteran, while K is the newcomer. It was a smart way to make the film feel fresh. Josh Brolin also does an uncanny Tommy Lee Jones impersonation. He apparently kept the cast of No Country For Old Men in stitches while impersonating Jones during shooting breaks. It’s interesting that Jones would be OK with this mockery. He seems like such a grumpy old man, it is nice to know he does have some kind of a sense of humour.

There are obviously plot holes in any time travel film, I think that’s what makes it so much fun. Why would Boris go back to a time when K was already an MIB agent? He should go back to when K was a kid, and get rid of him then. This is a small gripe. The whole idea of time travel is so exciting when done well, it is easy to overlook these shortfalls.

The third Men in Black film is a great way to continue this series. After this film was moderately successful, there was always going to be talk of a fourth film. I am not sure a fourth one would work. This third one got it right, but I don’t know if there is much more to say about this world, although I have heard rumours of a MIB/21 Jump Street crossover. I don’t know how that would work, but I am certainly intrigued by the possibility of that movie, if it ever becomes a reality.

Sally
Now here is a worthy sequel to Men in Black. MIB 3 brings back the charm and fun of the first movie, and manages to put an original spin on the whole story. The most surprising thing about the movie is that it succeeds by replacing the seemingly irreplaceable Tommy Lee Jones with Josh Brolin doing his best Tommy Lee Jones impression. With any other actor this wouldn’t work, but this tactic brings MIB 3 to life.

If you’ve seen MIB 3 and have read most of my reviews, then you can probably guess what I liked most about this movie: the time travel. A Boglodite criminal, Boris the Animal (Jemaine Clement), escapes a maximum security prison located on the moon in order to travel back in time to kill Agent K (Tommy Lee Jones) and prevent him from deploying the “ArcNet,” a shield that prevented Boglodites from conquering Earth back in the 1969. Agent J (Will Smith) figures out what has happened and travels back in time to save young K (Josh Brolin) and prevent the Boglodite invasion all over again.

Time travel is new to the MIB franchise, but this is the perfect series to include it in. We’re already dealing with aliens, it can’t get too much weirder. What really sells the concept, though, is how the story deals with this change in scenery. Everything is a 60s throwback: MIB headquarters is furnished in mod furniture; neuralyzers are hulking machines that take up an entire room; experimental jet packs are used to get around. The movie also takes a cue from its predecessors by redefining parts of the real world as alien inventions. The big example of this is the “real” reason for the moon landing, but there are also fun takes on super models and Andy Warhol.

As fun as the setting and story is, the real success of MIB 3 is in actors’ chemistry. I was wary about this movie knowing that Tommy Lee Jones wasn’t in most of it. He and Smith made a great team, but somehow Smith and Josh Brolin make an even better one. Brolin is excellent as young Agent K. His impression of Jones is hilarious, but also perfectly played.

My only quibble with this movie is that its plot nullifies the plot of the first Men in Black movie. With the ArcNet in place Earth is safe from alien attack, and yet the entire first film is about stopping aliens from destroying the planet. Normally this would bother me, but MIB 3 is so good I can overlook this gaping plot hole. Maybe the ArcNet had to be removed between 1969 and the 1990s… who knows. I’m happy to forget all this and just enjoy the movie.