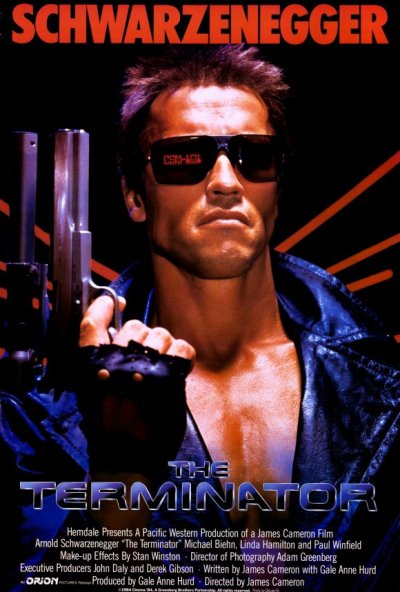 Getting ready for the release of Terminator: Genisys. Enjoy our marathon of the first four movies in the franchise!

Ben
It is hard to believe there was even a time when Arnold Schwarzenegger wasn’t arguably the biggest movie star on the planet, and James Cameron wasn’t one of the most acclaimed directors in the world. But there was. This first Terminator film announced these two as huge players in Hollywood, a status they would use to become legends eventually, with much of their best work being done together. It all started with this low budget action film that is amazingly original, despite its simplicity.

In a not too distant future, a program called Skynet has become self-aware and tried to destroy the world. A small band of human resistance has beaten Skynet, led by a man named John Connor. To neutralise this threat, Skynet sends a cyborg, known as a Terminator (Schwarzenegger) back in time to 1984. His mission is to kill a young woman called Sarah Connor (Linda Hamilton) before she can give birth to her future son John. The humans have also sent back Kyle Reese (Michael Biehn), a protector to fight the Terminator and save Sarah. The two wary humans must stop a machine that can’t be bargained with. The Terminator has one job to do and it will not stop until Sarah is dead. Kyle must convince Sarah of the truth, despite his story being unbelievable, and also avoid the authorities who would likely lock Reese up in a mental ward if he tried to explain he was from the future.

It has been a while since I watched the original Terminator. I love number 2 and watch it regularly, but normally skip this first installment. The film still holds up today. The effects have aged. There are clearly times when you can tell that Arnold’s face is a plastic mask, but it doesn’t detract from the story at all. I really do love how this story is so simple, but also so engaging at the same time. That is one of the things that James Cameron does really well. He can take an idea that has been done a million times before and tweak it just a little bit so that it is entirely original, but still relatable to a general audience. That is why his films make money, because the average person can go along for the ride without getting lost in technobabble and jargon.

Of course the story is great, but the three leads really sell it too. Arnold is particularly imposing as the mindless robot. He has few lines in the film, but is still scary over 30 years later. Linda Hamilton and Michael Biehn have taken a backseat to Arnold as his star continued to rise after this film came out, but that should not detract from their performances at all. Much of the story relies on them. They have terrific chemistry with each other, and make an unbelievable situation seem somewhat plausible.

The Terminator started what has become a huge franchise, and arguable Schwarzenegger’s signature role. Despite the aging special effects, Terminator is still a nail biting thriller.

PS – Keep an eye out for Bill Paxton as a gap toothed thug who runs into a naked Arnie when he first arrives.

Sally
Oddly, I had only ever seem Terminator 3 before I moved in with Ben. My parents were seeing the third installment in the theater, and my dad thought it wouldn’t be very nice to leave me at home alone. On the car ride over he attempted to explain the plot of parts one and two so I wouldn’t be lost. Unfortunately, his ability to recall The Terminator left me none the wiser about its plot. (Not that that really matters for number three, but we’ll get there.)

The Terminator is right up there with Alien and Die Hard on my list of movies that I unexpectedly loved after watching them. Never being a real fan of Arnold Schwarzenegger this just wasn’t high on my “must watch” list. I’m disappointed that I wrote this film off so quickly, especially since it’s a well crafted story with a time travel. Why was I wasting my time* renting terrible rom-coms from Netflix when I should have been watching this?

Even if you haven’t seen The Terminator, you know all the highlights. This is definitely one of those movies that has thoroughly permeated pop culture. Arnie’s dead pan delivery of lines like “I’ll be back” (one of the few lines he actually has) shot him to stardom. This is also a movie with some cool, though now dated, special effects that are still impressive in an 80s sort of way.

Schwarzenegger and the sci-fi hook aside, The Terminator is a great story. I expected a somewhat generic action flick, but was surprised at how suspenseful the movie is. Watching the Terminator track its prey through Los Angeles often left me on the edge of my seat. Linda Hamilton is excellent as naive Sarah Conner, a performance that evolves in the sequel. You can feel her terror right up to end, when the suspense hits overdrive during the climactic final confrontation.

If you haven’t seen The Terminator, I recommend doing so ASAP. Even if you’re not that into action or science fiction, this is still a fun movie. Also, you get a glimpse of full frontal Schwarzenegger nudity, which I only bring up because penises rarely show up in main stream movies. I’d also like to share  that my cousin was watching that scene one time and described it as “Governator floppage.” Had to work that into my review somehow.

*Not an actual waste of time. Ghosts of Girlfriends Past is a gem.