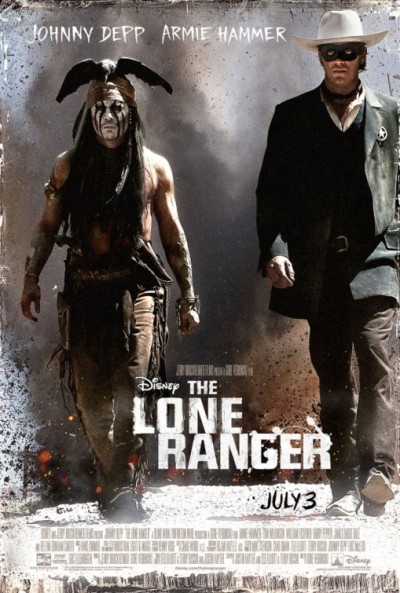 Sally
This movie could have been so good, but a number of baffling choices led to The Lone Ranger being a strange mess. That said, it’s still a lot of fun at times. It’s certainly not as bad as some claim.

The biggest flaw of The Lone Ranger is that its pacing is all over the place. The story is constantly interrupted or stalled by crap nobody cares about. Example: old Tonto narrating the story. These scenes were completely unnecessary and seriously disrupt the pacing. The movie didn’t need this framing device, especially if it was intended to launch a franchise (Which why wouldn’t it have been? Everything is a franchise these days.). Another example: it takes John Reid, a.k.a. the Lone Ranger (Armie Hammer), like half the movie to don his signature black mask. Backstory is important, but come on. It feels like the pace could have been picked up a little here.

Another issue is Johnny Depp. Normally I love Depp, and he’s not terrible here. There was controversy surrounding his casting as a Native American, which is founded. Why not cast an actual Native American actor in this role? This was made in 2012/13, not in the 1950s. But putting that aside for a moment, this movie feels more like a movie about Tonto than one about the Lone Ranger. I get that Depp is a much bigger name than Armie Hammer (awesome name, by the way), but the movie is called The Lone Ranger. It would have been smarter and daring to give Depp a more secondary role, one where he helps Hammer shine rather than distracts from the star.

I also feel like The Lone Ranger really struggled to identify its target audience. For the most part this is a family friendly adventure, but then the bad guy eats a dead man’s heart because just killing a Texas Ranger isn’t bad enough, I guess? At least they don’t directly show this gruesome detail, but was it really necessary in the first place? It’s small things like this that indicate to me that Disney completely misidentified who their target audience was. This probably isn’t a movie that would appeal to teenagers, so don’t add edgy shit to try to pull them in. Focus on Baby Boomers– who grew up watching The Lone Ranger TV series– and the grandkids they are now taking to the movies. Those kids haven’t been exposed to many Westerns, and had this one been done well, they would have been clamoring to watch the sequels.

Still, I do enjoy this movie. It can be really hard to ignore all its flaws, but there are many genuinely great parts that I love. Armie Hammer, for one. I think I’m most annoyed that he has been denied what could have been a great career building franchise. The final action sequence set to Rossini’s “William Tell Overture” is pretty awesome. The cast employs a number of excellent character actors, a staple of any good Western. Silver is a very handsome horse.

I just really wish they had cut all that old man Tonto crap.

Ben
I really wanted this to be good. It had been a while since a decent Western was released and I had high hopes for The Lone Ranger. After its release, the film was blasted as being one of the worst of all time and those reviews seem really harsh. The film isn’t great, but it certainly isn’t awful.

The Lone Ranger is the story of John Reid (Armie Hammer), a lawyer returning home to be with his brother (James Badge Dale) and his family. John gets swept up in his brother’s chase for the vile murderer Butch Cavendish (William Fichtner), and ends up joining his brother as a sheriff to hunt Butch down. While out hunting, the posse is betrayed by one of their own and Cavendish ambushes them, killing John’s brother and severely wounding him. John is rescued by an Indian called Tonto (Johnny Depp) and the two embark on a quest to avenge his brother’s death. The two quickly realise that several lawmen are working with Cavendish and John must turn to unlawful means if he is to bring down his brother’s killer. John creates an alter ego called the Lone Ranger and ventures out to protect the citizens and stop Butch any way he can.

My biggest problem with this film is Johnny Depp. He was far too big of a name to be playing the sidekick Tonto. His name receives top billing during the credits, which is a problem because he is not playing the title character of The Lone Ranger. Too much attention is paid to Tonto’s character and not enough to Armie Hammer. Hammer and Depp both do admirable jobs with what they have, but I feel like the character of John Reid is quite one dimensional and not nearly as fleshed out during the film as Tonto is. There is also this whole sequence showing Tonto as an older man telling his story to a young boy. This whole sequence seemed forced and just a reason to get Johnny Depp in some old man make up.

The film is not all bad. There are some high quality production values that have clearly gone into making this picture. The budget was apparently well over 200 million dollars and you can definitely see it on screen. All of the action set pieces are top notch. It was also great hearing the “William Tell Overture” again. The music is used perfectly throughout the film, not appearing until the final sequence when the Lone Ranger is off to save the day. It was very hard not to bop along to that tune. It is still very catchy.

I really wanted to like this film. Armie Hammer is on his way to becoming a leading man one day, unfortunately it wasn’t The Lone Ranger that got him there. He is charming enough to eventually get the big break he deserves. Johnny Depp on the other hand, I feel like audiences may be tiring of his quirky shtick. A lot of time has passed since Pirates of the Caribbean and he rarely takes risks with the roles he chooses now. All of them are quirky random roles that obviously appeal to him, but fail to give the audience anything new.

The Lone Ranger is not the hit it should have been for Disney, but it is certainly not the debacle many claimed it was either.