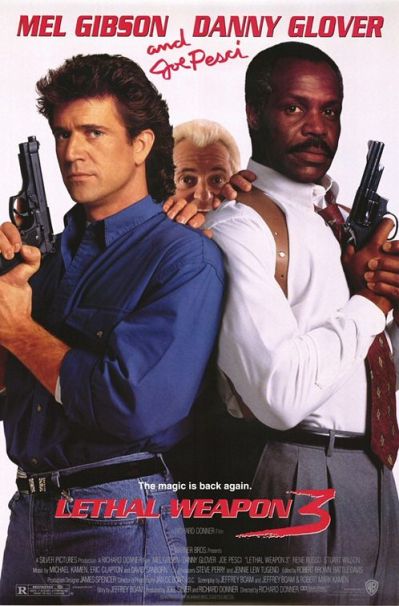 Sally I’m getting kind of bored of this shit. Not that Lethal Weapon 3 is shit, per se, I’m just constantly reminded that I’m not re-watching Die Hard with a Vengeance right now. (I really had no idea how much I like those movies. I hope I gave 1 and 3 excellent reviews.) Like, this is good, I’m just definitely over it at this point. LW3 has all the same elements that made the first two fun: Riggs and Murtaugh have the same great chemistry; we’re treated scenes humorous of Murtaugh’s home life; and bringing Joe Pesci’s character, Leo Getz, back was a smart move. There’s also the introduction of a love interest for Riggs (Rene Russo), which is predictable, but still manages to breathe some new life into the series. But there’s an overwhelming feeling that I’ve seen this all before, because basically I have in the previous two movies. I really don’t know what else to say about Lethal Weapon 3. Rene Russo was good. I wish she’d been given bigger roles in both Thor movies, and I’m interested to check out some of her other work (Nightcrawler is supposed to be great.). There are also a lot of references to the previous two films, which is fun for fans of the series. It does feel like you’re watching two guys who are genuinely friends and work partners, I’ll give them that. Oh, I also just realized that the two main characters have the same initials, just reversed: Martin Riggs, Roger Murtaugh. They really are opposite in every way! OK, just one more to go. Rating: C

Ben This was the first Lethal Weapon film I watched, so it will always hold a special place for me. I remember getting Lethal Weapon 3 for my 11th birthday from my dad, having not seen any of the previous films, but still willing to give this film a shot because it starred that bumbling burglar from the Home Alone films. I knew nothing about Mel Gibson or Danny Glover, but I would soon learn about all of their awesomeness. I still don’t know what convinced my father this film would be up my alley or that it was even mildly appropriate for a 11 year old. I am glad he did though, because it introduced me to one of the best film series of all time. People will tell you that this third installment is not as good as the first two, and they might be right, but there is still enough fun here to be thoroughly entertaining. The third Lethal Weapon film picks up six days before Murtaugh (Glover) is scheduled to retire from the force. Riggs (Gibson) and Murtaugh have been demoted to patrolmen after they inadvertently set off a bomb in an office building rather than just wait for the bomb squad to come. This is a throwback to the second film with many references to the bomb found on Murtaugh’s toilet. Even when these two are demoted, trouble still seems to find them as they stumble upon an attempted robbery of an armoured car filled with cash. The two cops stop the robbery, but stumble onto a potential inside job stealing guns the police have confiscated as evidence. Riggs and Murtaugh eventually run into Lorna Cole (Rene Russo), an internal affairs cop looking into the robbery and the guns going missing. They track down former police officer Jack Travis (Stuart Wilson), an incredibly brutal cop in his day who has now turned against his former employer. Riggs, Murtaugh and now Lorna, team up to take this crooked former cop down. This is still a very entertaining film. One of things I really like about this series is that it always adds people to this films who fit right in. The second movie added Joe Pesci as Leo Getz (who returns for this third movie as Murtaugh’s real estate agent with a crazy bleached blonde hairdo) who just fit right in with Riggs and Murtaugh so well. This third movie also adds a new character, Lorna Cole (Rene Russo). This is the first time we have seen someone who could be considered an equal to Mel Gibson’s Riggs. He has had love interests in the past, but Lorna is almost a female Riggs, without the suicidal tendencies. She is a cop who is not afraid to rush in guns blazing and can kick her fair share of ass too. I love the Riggs and Lorna relationship, after everything he has been through, it is nice to see Riggs find some happiness again. As in the second film, Riggs is allowed to grow as a character. He is finally able to find a female equal again, something he has not had since the death of his wife. It is nice to see Riggs find happiness again after most of the previous women in his life have met with not so kind ends. This third film also harkens back to the first two films really well. There is plenty of references to Murtaugh’s bomb on his toilet from the second film. Whether they rush into action “on 3” or “1,2,3 and then go” also rears its head as they need to explain their rules to Lorna. These little shout outs are nice reminders that we know these characters and have been a part of their lives for over five years now. As in the first two films, there are plenty of laughs and action in this third Lethal Weapon film. The new cast members fit right in with the returning characters. Like I said earlier, I am probably biased toward this film because it was the first film I saw of this series so will always hold special significance to me. Rating: B+