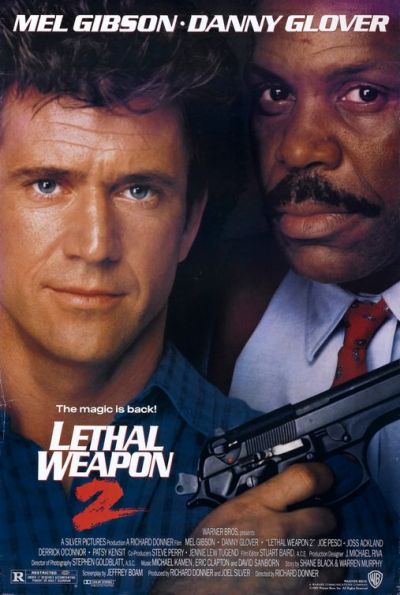 Sally
Just like with the first in this series, I had never watched Lethal Weapon 2. And yet I had heard the “Diplomatic immunity!” line shouted in a South African accent thanks to Ben and a very interesting episode of the Stuff You Should Know podcast. So I knew it must involve some shady international dealings and probably Mel Gibson acting insane.

Hey, what do know. I was totally right! This is the sort of sequel that delivers in the sense that it does not deviate much from the formula created by its predecessor. And honestly, it doesn’t need to. Lethal Weapon is all about the chemistry between Gibson and Danny Glover. The story is almost irrelevant, so long as Riggs flies off the handle a few times and Murtaugh says he’s “getting too old for this shit.”

Lethal Weapon 2 delivers in this formulaic sense, however it also takes on the very serious issue of apartheid in South Africa. An action movie doesn’t have to address real world issues, but it’s nice that this one did. I mean, it’s not like apartheid was controversial in the US, but with most action flicks at the time focusing on invented or Soviet villains, it makes LW2 feel almost serious.

This line has been uttered with a South African accent by me for years. Lethal Weapon 2 manages to achieve a better film than the original. The first film basically invented the buddy cop genre, so expectations for a sequel were high. Could Mel Gibson and Danny Glover recapture the lightning in a bottle chemistry that was there for the original film a second tim? The good news is they do recapture their amazing chemistry a second time, Riggs and Murtaugh are still a lot of fun in this follow up.

Lethal Weapon 2 picks up a few years after the first film. Riggs (Gibson) and Murtaugh (Glover) are now established as partners and are hunting down a group of drug dealers. When one of their chases goes awry, a big pile of South African Krugerrand gold coins are found in the trunk of one of the now dead dealer’s cars. This leads the two cops to an obviously crooked diplomat (Joss Ackland) using his diplomatic immunity status in America to commit plenty of drug related crimes. When Murtaugh’s family is targeted because they are getting too close to finding this guy, Riggs and Murtaugh are taken off the case and told to go and babysit a money launderer in witness protection named Leo Getz (Joe Pesci). Turns out he was also involved with these crooked South Africans and is all too eager to help Riggs and Murtaugh hunt down these crooks.

The best sequels take what was great about the first film and expand on it. Too many make the mistake of just copying the original and hoping for the same success. What makes Lethal Weapon a superior sequel is that it gives the characters a chance to grow. We already knew that Riggs was a suicidal mess from the first film, but now we get to see a little more about his backstory and what actually happened when his wife died. It is good to see these characters grow and not be just one dimensional characters like so many of their action movie counterparts. The film also introduces Joe Pesci as Leo Getz. Pesci is a riot as the fast talking Getz and works so well with Gibson and Glover. His character would go on to be in every Lethal Weapon film that follows, and he is a fantastic addition to the series.

Just as in the first movie, there is action aplenty, but also a heap of laughs. This is a true action-comedy. Gibson and Glover still deliver some very funny moments. Most of them revolving around Murtaugh’s daughter (Traci Wolfe) making her acting debut in a condom commercial. It is the source of much ribbing for Murtaugh from his fellow officers. Also as in the first movie, Gibson and Glover have amazing chemistry. There must have been fears that the first film was a fluke, but they are unfounded. The two recapture the report they had in the first film, and will continue to do so in every film of the Lethal Weapon series. You care about these characters, and that is largely due to the performances of Gibson and Glover.

Lethal Weapon 2 manages to excel the original by taking already beloved characters and letting them grow to another level, but still keeping what worked so well in the first film. The film is one of the best sequels I can remember and one that arguably flies higher than its predecessor.