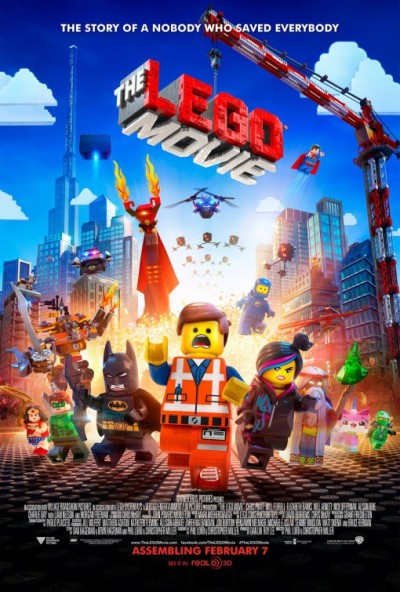 Sally
When I heard that The Lego Movie did not get nominated for Best Animated Feature at this year’s Academy Awards, I was angry. Like, really angry. Animated Feature is typically the only category I really give a crap about, because I feel like I’ve spent my entire life becoming an expert in animated films. So I can say with absolute certainty that The Lego Movie‘s exclusion was a big mistake. Big. Huge.

I think a lot of people immediately wrote this off as an extended toy commercial. It definitely is not one. This is an excellent story with a lot of heart. The story is that of an ordinary guy (Chris Pratt as construction worker, Emmet), who is mistaken for the mythical “Special”, a Master Builder who will save the Lego Universe from the dastardly doings of Lord Business (Will Ferrell). At first Emmet follows the rules and tries to fit in, but eventually learns that he is in fact special, thanks to the often weird ideas that could only come from his imagination.

At it’s heart The Lego Movie is really an extended celebration of imagination and creativity. This is something sorely lacking from much of children’s play these days, where every toy seems to be part of a commercial tie-in to something else. It’s actually quite ironic that Lego Movie criticizes this sort of branding, as the Lego business has moved away from it’s generic play sets in favor of movie and TV tie-ins in recent years. It takes a lot of guts for a company to OK a film that points a finger at itself. At the same time the message of this movie harkens back to the original intent of the toy: make whatever you want; there are no limits. I doubt Lego will forgo partnering with popular franchises anytime soon, but maybe it will lead to a resurgence in popularity of its more traditional sets. After all, Emmet the “everyman” is the hero, not Batman or the Ninja Turtles or Shaquille O’Neal.

The Lego Movie also succeeds where most animated films don’t by incorporating humor geared more towards adults than kids. However, there is nothing inappropriate about the jokes. They’re just the sort of pop culture references and silly nonsense that will tickle parents. With so many kids movies being unbearable to watch if you’re over the age of 10, it’s great to have films like this that won’t drive you crazy after repeated viewings. The only part that might grate adult nerves is the theme song, “Everything is Awesome.” But even that is catchy in a fun way.

I really can’t say enough good things about this movie. I was so impressed by The Lego Movie, and rank to among the best films made in the past decade. The clever, heartfelt story is up there with anything Pixar or Disney has done. This is a celebration of childhood imagination, and a reminder to adults to do everything in their power to nurture these sparks of creativity. Simply put, everything about this is awesome.

Ben
What could so easily be written as a toy commercial ends up being one of the most fun films for the family of 2014.

The Lego Movie is set in the world of Lego, where everyone follows their instructions, watches all the same television shows and likes all the same restaurants. This placid society has become mindless under the leadership of evil dictator Lord Business (Will Ferrell). Only a few select people called Master Builders can create things without using the instructions. They are awaiting a chosen one that will come and end Lord Business’s reign. When the most ordinary Lego man of them all, Emmet (Chris Pratt), inadvertently stumbles upon a piece of resistance, the Master Builders believe he is the Chosen One. He sets off on a quest through the world of Lego, helped by the spunky Wyldestyle (Elizabeth Banks), Batman (Will Arnett), Benny the astronaut (Charlie Day), and the always upbeat Unikitty (Alison Brie), as they try to stop Lord Business from controlling the world any longer.

The thing I loved about this film was that it was just like when we played with Lego as a kid. We didn’t care that Batman never hung out with the Ninja Turtles, when we played with Lego, anything was possible and I loved that this film took advantage of that. There was always the chance that rights issues would get in the way of making this dream come true, but for the most part, it seems like everyone agreed to use their characters in this film and it works so well. The voice cast is fantastic. Chris Pratt is fun as Emmet (what a year he had with this hit and Guardians of the Galaxy both coming out). There is a real hint of his Parks and Recreation character Andy Dwyer about him and that is never a bad thing. Will Arnett is also fun as Batman. The film is very tongue in cheek with him, lambasting his character and how he has been portrayed as a brooding sullen figure who only wears black. I also loved Alison Brie as Unikitty. I love Alison Brie on Community, and she is just as much fun here as the perpetually happy cat.

This film is not just for children either. There are so many tongue in cheek jokes that the parents will get too. The Lego Movie truly is fun for the whole family.

Clearly this is also an advertisement for Lego, but who cares. Lego is awesome. Every kid should have it.