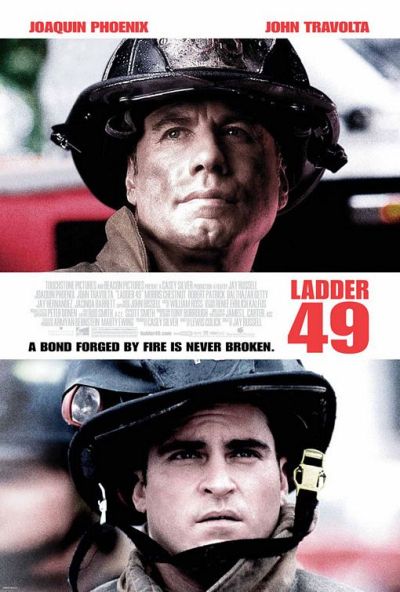 Sally
Fire fighting is an incredibly exciting and dangerous profession. Ladder 49 definitely depicts the danger of the job, but somehow makes it feel utterly boring.

I was not engaged with this story at all. The plot is a by-the-book drama, ticking all the boxes on the “hero story” checklist. There were no surprises at all in this movie, and I felt there should have at least been one. Even the ending was completely predictable, and even worse, designed to tug at the heartstrings in the worst way possible. This is really the problem with Ladder 49: it panders to its audience, never attempting to provoke deep thought… or any thought at all, really.

I also had a hard time getting into this movie because of the two leads. John Travolta plays the chief of the firehouse, a role I found hard to believe him in. He just does not come across as very commanding. Joaquin Phoenix is the newbie on the job. The problem with his character is that he comes across as very unlikable. He’s such a jerk to his family, but also Phoenix just always feels icy and aloof. I can’t help but think that this movie would be improved simply with some recasting. It might be easier to overlook the blatant emotional drivel that’s presented.

Ben
This mostly unknown film about firefighting is certainly exciting. There are enough moments of watching large men fighting fires to please most adrenaline junkies. Where this movie falls apart is the fact that the lead character we are meant to be caring about comes across as a bit of a jerk. The ending also left me disappointed.

Ladder 49 is the story of Jack Morrison (Joaquin Phoenix). At the beginning of the film, he is an experienced fireman entering a burning building for the millionth time with no regard for his own health. After ensuring a man trapped in the building has been winched to safety, the ground Jack is standing on breaks and he falls to the bottom of the building breaking his leg. He is trapped in the burning building while his mentor, Mike Kennedy (John Travolta), works like crazy to get his protégé out of the fiery mess Jack finds himself in. As he waits for the rescue party, Jack begins to reflect on his life as a fire fighter and we see his progression from constantly hazed rookie to respected member of the team. We also get to see how he met his wife (Jacinda Barrett) and the rocky relationship they have due to the constant danger Jack finds himself in as a fireman.

I am going to talk about spoilers in this review. I always try not to, but I can’t explain the issues I had with this film without going into how it ends. The film is over ten years old, so if you haven’t seen it yet, tough luck.

So Joaquin Phoenix’s character dies at the end of the film, which really bugged me. The audience has just spent nearly two hours watching this guy’s life story only for him to bite the bullet at the end. Sometimes I feel like filmmakers are too smart for their own good. I can understand them wanting this to be as true to life as possible, but you know what, I don’t go to the movies so I can see something that is 100% accurate. You know what is 100% accurate, real life. If I wanted to watch stories about firemen dying in burning buildings or police officers getting killed in the line of duty, I will just watch the nightly news. I go to the movies to be entertained, I know it is cheesy, but I love a happy ending. Life is sometimes so miserable, movies should be uplifting and take us out of our misery for a few hours. It also didn’t make sense that John Travolta would just abandon his friend so quickly. It seemed like one minute where Travolta decided his friend was doomed and called off the rescue mission. I feel like he would have exhausted every opportunity to rescue him.

Jack Morrison is also not very likable. He comes across as a huge jerk to his wife and kids, which made it harder to care whether he lived or died.

On the plus side, there are some great shots of burning buildings and we see some fire fighters in action. One of the men playing a fire fighter was actually one and he trained the rest of the cast how to react in certain situations. It was a nice touch.

Ladder 49 wastes some awesome firefighting scenes on an unlikable male lead and has an unsatisfying ending. I didn’t expect much from this film, and it didn’t disappoint. This is yet another of those films that I really question why I bought it. There isn’t even a hot young actress I could chalk it up to. It boggles the mind that this film is making an appearance in my collection at all.