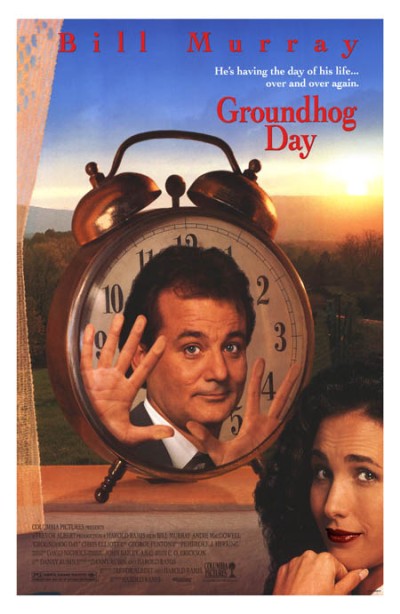 Though this review is posting on Groundhog Day, it was supposed to post months ago. We watched this back with the rest of the Gs, but somehow forgot to write reviews for it. It wasn’t until I tried to link to the movie Groundhog Day within our reviews for Edge of Tomorrow that we discovered our accidental omission. So here we are, better late than never. Enjoy!

Sally
If I had to pick a favorite Bill Murray film, Groundhog Day would be it. This is an incredibly tough decision. Murray is such a talented actor, with so many movies in his filmography that are gems– Ghostbusters, The Life Aquatic, St. Vincent, Caddyshack. To choose just one is so difficult. But Groundhog Day stands above the rest thanks to its flawless blending of comedy and spiritual themes.

Groundhog Day is the sort of odd movie that could so easily have slipped under the radar, yet became a part of the cultural lexicon almost immediately after its release. This success is directly attributed to the film’s central plot device, which serves as a perfect metaphor for any unpleasant situation that seemingly repeats with no end in sight. American military personnel started using the term first, but anyone with a monotonous job would likely describe their situation as a “Groundhog Day.”

This movie certainly resonates thanks to its concept, but it also succeeds in how it handles the idea. It’s primarily a comedy (and a very funny one at that), however there are also elements of drama, despair, and even horror woven throughout. Murray’s character, Phil Connors, lives a lifetime in his single repeated day. The story would be incomplete if it didn’t encompass all the emotions and milestones of the human condition.

I also think Groundhog Day has become so popular because it speaks to spiritual concepts that everyone seems obsess over. Phil starts off as a very selfish man who has no regard for how his actions impact those around him. His perpetual day is first spent indulging in self-serving exploits, like using knowledge gained from the previous day to pick up an unsuspecting woman. This “adventure” he’s given is at first treated like a game, just another excuse to act badly without any consequences. However, Phil soon finds this life to be unfulfilling. He eventually discovers the most important thing any of us ought to learn: that life should be spent helping others. Phil’s quest for self improvement is the same one we’re all on. We all try to better ourselves, but rarely have a reason for doing so that extends beyond ourselves. Once we understand that self improvement can improve the lives of those around us as well, then we have a much better chance of success, just as Phil does.

I’ve always felt that comedy is one of the best ways to teach, and Groundhog’s Day is a perfect example of using humor to introduce a concept that you wouldn’t think could be funny. Not everyone will pick up on or even care about Groundhog Day‘s deeper meaning (I was a kid when I first saw this, so it all went over my head), but that’s what I like about the movie. It works as a comedy, but it also offers something more meaningful without beating you over the head with the moral.

Groundhog Day is one of the best comedies every written, in my opinion. Bill Murray is at his best, playing the jerk you end up rooting for, which is a pretty apt description for the human race as a whole. Phil Connors is us all– a selfish jerk just trying to learn from his mistakes to become the person we all wish we could be.

Ben
By far, one of Bill Murray’s best films is Groundhog Day. I do have a soft spot for Ghostbusters, but this is a solid number two on his list of classics. This original romantic comedy is Murray at his sarcastic best, ably supported by his potential lover Andie McDowell and constantly aggravated cameraman Chris Elliot.

Murray plays Phil Connors, a TV weatherman heading down to Pennsylvania to see the groundhog come out and predict if we will get six more weeks of winter. This is Phil’s worst day of the year. He hates the idea of everyone caring what a rodent thinks about the weather when he does it professionally every single day. Phil is joined by his producer, Rita (McDowell) and a cameraman (Elliot), who he constantly berates. Groundhog Day goes as planned– he hates every minute of it and can’t wait to leave– but a blizzard leaves them stranded in Punxsutawney, so he has to spend an extra night. When he wakes up, he soon realises he is living yesterday over again. He slowly realises that he is living Groundhog Day over and over again. We are treated to some funny montages of Phil playing tricks on the good people of Pennsylvania before Phil finally decides to woo his pretty producer.

The rest of the film is a great twist on a normal romantic comedy. Phil is living the same day over and over, so every time he screws up, he can just try again the next day. The catch is that he only has one day to convince Rita she is the one for him.

I really loved the character progression for Murray. He starts the movie as a grouchy weatherman who would rather be anywhere but Punxsutawney. As he gets to know the various citizen of this small town, he begins to appreciate them more and more, and also realises his feelings for Rita. It is estimated over the course of the movie he relives the day several thousand times and I really loved how it eventually sends him stir crazy, committing suicide multiple times to try and end this sequence of reliving the day over. I feel like this would be a normal reaction to something like this happening.

I also loved that they never try to explain why this is happening. I am sure some studio suit wanted to come up with a hair brained scheme for why this is happening to Phil, but I am glad it doesn’t. The audience doesn’t need to know why this is happening, we accept that it is and no more information is needed. I recently watched the 80s film Mannequin, and they have inserted a silly sub plot to explain why a mannequin keeps coming back to life, but it really isn’t required to enjoy the movie. If anything, the implausible explanation detracts from what is a very charming 80s comedy. I am glad Groundhog Day did not make that mistake.

There really is not much more for me to say about this film. It is classic Murray, directed by the always awesome Harold Ramis. The film is hilarious, but also feel good. I can’t recommend it enough.