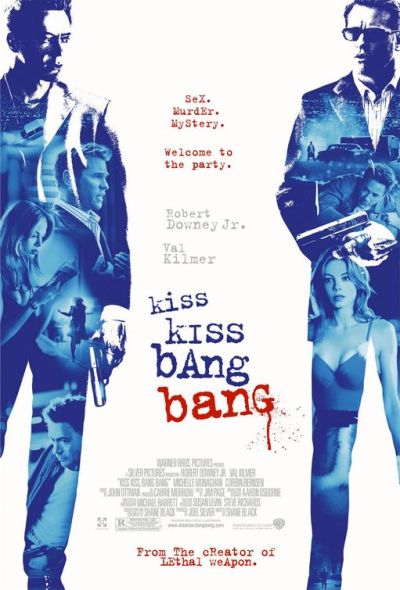 Ben
This movie was such a surprise for me. At the time it was released, Robert Downey Jr, due to his frequent run ins with the law, had become not much more than a punchline for many late night talk show monologues. Given where his career is at today, it is hard to imagine a time when he was a nobody, destined to be written off as wasted potential. Kiss Kiss Bang Bang was the movie that started his revival. Jon Favereau (director of Iron Man) has said publicly that it was Downey’s performance in this film that helped convince him that Robert Downey Jr had what it took to be the star of his new superhero franchise, and the face of the Marvel Cinematic Universe.

Downey plays Harry Lockhart, a amateur thief living in New York. When one of robberies goes pear shaped, killing his partner, Lockhart evades the police by joining a line of guys auditioning for a role in a movie filming in Los Angeles. The producers mistake Harry’s remorse for the botched robbery with method acting, they take him to Los Angeles to get trained how to be a private investigator by Perry Van Shrike (Val Kilmer), nicknamed “Gay Perry,” the only homosexual private investigator in town. Perry shows Harry the ropes and the two get caught up in a real murder mystery involving one of Harry’s childhood friends (Michelle Monaghan) and need to crack the case before all of them end up dead.

This film could so easily have been a generic buddy cop movie, but the performance of Downey and his terrific chemistry with Val Kilmer elevate it to something better. The film was written and directed by Shane Black, the writer of the Lethal Weapon series, and you can see his influence here. Just as Riggs and Murtaugh worked so well together in the Lethal Weapon series, the same is true here for Downey and Kilmer. The dialogue is great, particularly Robert Downey Jr when he narrates the film. I have liked Val Kilmer for a long time. His performance as Doc Holliday in Tombstone is one of my favourite of all time. He was also Madmartigan in another of my childhood favourites, Willow. He has a reputation for being a bit prickly, but I really don’t care about any of that. He is a usually solid actor that I have a lot of time for. His performance in Kiss Kiss as a gay private investigator only reinforces this. He is really good and works so well with Downey.

Kiss Kiss Bang Bang is a fun mystery film, with terrific performance by Downey and Kilmer. The film is enjoyable enough, but if it had anything to do with Downey being cast as Iron Man, I am even more grateful it exists.

Sally
We’ve watched Kiss Kiss Bang Bang a couple times now, but I’m still not 100% clear on the story details. I don’t know… I just can’t seem to maintain interest the movie for its duration. It’s funny and has some great performances, but eh.

I will definitely say that this movie is a fun take on the mystery and buddy cop genres. Robert Downey Jr is excellent as a hapless criminal who stumbles into the acting biz. He’s made a name for himself playing the confident and cocky Tony Stark, so seeing him play the bumbling fool is a fun change. His partner in crime is Val Kilmer, playing a private detective hired to give the budding actor on-the-job training. The chemistry between these two is great. There are so many hilarious scenes involving the two of them, I would recommend the movie for these two alone.

The story itself is good, from what I remember anyway. I did enjoy that this is a send up of the hardboiled detective genre, but with a decidedly sarcastic edge. The plot is full of crazy happenstance and false incrimination. This could easily have become a little old after awhile, but manages to remain fun throughout, even at its most unbelievable.

By all accounts I should really like this movie. I don’t know what it is that keeps me from being fully engaged in the story or the characters. I’m sure I’ll get more chances to come around to Kiss Kiss Bang Bang. Ben really likes this film, so we’ll likely watch it again. It wouldn’t be the first time I’ve ended up liking a movie I was previously ambivalent about.