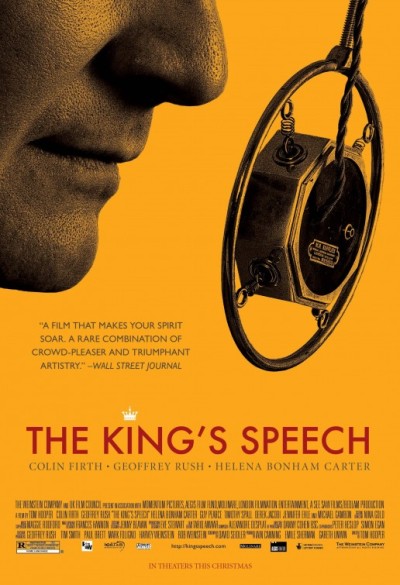 Ben
Sally always makes fun of me for not loving this film. While I can definitely appreciate the quality of this film– it is well made and nearly every actor involved is at the top of their game, especially Colin Firth in a deserved Oscar winning performance– I just find it really difficult to get really invested in a story about a pompous prince who can’t talk properly.

The King’s Speech is the story of Prince Albert (Firth) and his struggle with stuttering. As World War Two approaches, Albert is finding himself more and more in the public eye. The current king (Dumbledore) is reluctant to put his philandering oldest son (Guy Pearce) on the throne due to the affair he is having with Mrs. Simpson (Eve Best). So George is thrust into the limelight with the intention of grooming him for the throne in case his womanising brother abdicates (Spoiler alert, he does). The ‘brand new’ radio technology has made the royal family more accessible than ever, and Albert has always struggled with a stutter and cannot bear the thought of speaking in front of millions of people as the king would be expected to do. His wife (Bellatrix Lestrange) organises for a speech therapist (Captain Barbosa) to come and school her husband on how to eliminate the wretched speech impediment.

I really struggle to love this film. It is certainly well made and has a terrific cast and has all of the hallmarks of a great film, except an engaging story. The fact that a royal family member stutters is just not an interesting enough story to hold my attention for two hours. The quality of the film is great, and makes up for a so-so story, but not enough for me to love this film. Given all that was happening in Europe at the time, who cares if your future king stutters. I do not know why this story needed an entire movie devoted to it. If the acting was not as good as it is, this film would be quickly forgotten as a dour Lifetime film.

The most interesting part of this film was spotting all of the Harry Potter alumni turn up in muggle clothes. The best one is Wormtail as Winston Churchill.

The King’s Speech has great acting, particularly from Colin Firth and Geoffrey Rush, but the story of a stuttering prince is not engaging enough to make this film the classic that people would have you believe it is.

Sally
I spent months trying to get Ben to watch The King’s Speech. I’m not sure why, this isn’t really a Ben jam. There are no explosions. What little comedy there is is subtle and dry. It deals with real life royalty overcoming the type of first world problem that only royalty would face. I guess I thought he’d appreciate it, if only for the fact that it was unfairly rated-R by the MPAA because it happens to include more than one occurrence of the F-word. I don’t think he really cares though, based solely on his lack of enthusiasm at watching it again for the blog.

I, on the other hand, think The King’s Speech is brilliant. Historical dramas are a favorite genre of mine, and this one stands out. This movie isn’t grand and sweeping, like many period dramas. It’s quiet and simple, the exact opposite of what you’d expect from a film about royalty. Rather than providing opulent scenery, Speech focuses on character development. The audience genuinely cares about George VI by the end, something that few movies about kings truly achieve.

The life of Prince Albert, the future King George VI, was an interesting one. He only became king due to his brother’s controversial abdication, and served as monarch throughout WWII. But this film doesn’t really focus on those events. They are there in the background, of course, but this is really the story of Albert’s struggles to overcome his stammer. This may seem like the silliest aspect of the period to focus on, but it would be more important than you’d think. A country’s leader is the face of the nation– both for its citizens and internationally– and perception of these (mostly) men is incredibly important. This was roughly the same period during which US President Franklin D. Roosevelt was careful to rarely be photographed in a wheelchair or reveal the full extent of his paralysis because people might feel this handicap meant he was weak and unfit for office. A king who stuttered would reflect poorly on Great Britain, even though this trait was entirely out of his control.

What makes this movie work are the excellent performances delivered by the entire cast. Colin Firth and Geoffrey Rush star as Prince Albert and speech therapist Lionel Logue, respectively. The chemistry between the two is undeniable. The actors convincingly show the evolution of their historical counterparts’ relationship (with much artistic license taken, I’m sure) as they slowly become friends. Helena Bohnam Carter is Albert’s wife, Elizabeth (the future Queen Mother), and gives the sort of subtle performance that makes me wish she’d make more movies like this. She’s great as weird, quirky, over-the-top characters, but she’s just as amazing playing a normal person (well, as normal as royalty can ever be). I also loved Guy Pierce, who plays Albert’s brother, the infamous Edward VIII who abdicates the throne for his lover Wallis Simpson. His role is small, but makes an impact due to his charm.

This is a very inspirational film, especially for anyone who has ever felt an extreme lack of confidence in their life. My own struggles with social anxiety led me to identify with Prince Albert immediately. Having a stutter and then being forced into a job that required constant public speaking would have been a nightmare for him, I’m sure. There are times when the thought of going to a party makes me sick with worry, but at least the only person forcing me to go is myself.

I really feel that this is one of the best dramas of the past decade. The story is wonderfully told, and relatable to the young and old alike (don’t let the R-rating fool you; there is nothing in this film that your average 12 year old hasn’t already heard). It’s a slow burn of a film, but completely worth your time.