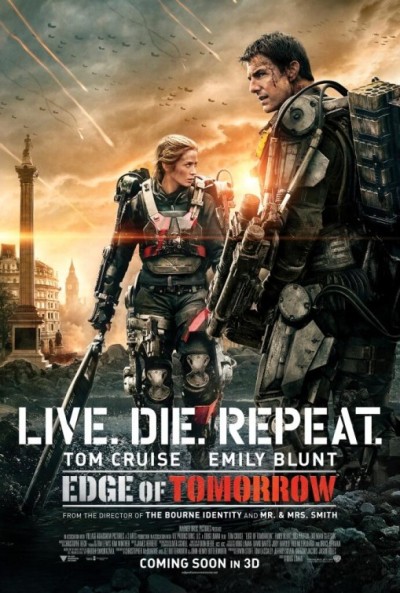 Ben
Groundhog Day meets Call of Duty!! Edge of Tomorrow (or Live. Die. Repeat., as it is called in some regions) was inspired by a first person shooter video game. As an avid player of the Call of Duty games, I can appreciate the frustration of constantly having to respawn at the last place my game was saved. This movie takes that concept and puts it on the big screen, giving us an exciting action flick lead by movie star Tom Cruise. I actually do mean movie star when I mention Curise. Say what you will about his off screen Scientologist ramblings, the man can own the screen and is one the few leading men in Hollywood that does it in every role he takes.

Cruise plays William Cage, a major in the army fighting against a mysterious alien race who appeared out of nowhere hoping to invade earth. Cage has mostly been involved in public relations during his time in the military, but when he tries to blackmail a general (Brendan Gleeson), Cage ends up on the front line of a major offensive in France, where the war will be won or lost. During the fighting, Cage is splattered with the blood of an alien nobody has seen before. Moments later when he dies and is transported back to the beginning of the day before the battle has started. He is the only one aware of this phenomenon until he meets Rita (Emily Blunt), who has recently lost the abilities Cage now has. She is the only one who believes Cage’s story and begins to train him every day so that eventually, he will be able to take on the enemy and win this war for the human race.

This film is a whole lot of fun. Tom Cruise is great as the PR military man who must learn to fight a war he is nowhere near ready for. His character’s progression from novice fighter to experienced veteran is done really well, and Cruise pulls off both roles believably. The action sequences are great, the scenes where humanity invade the beaches of France are reminiscent of Saving Private Ryan.

I enjoyed this film a lot. My only real complaint is the ending. I won’t spoil that for you here as this movie is quite recent, but it does not make much sense in the grand scheme of things. It raises more questions than it answers. Nevertheless, I had fun watching this film. Cruise is charismatic and funny, the action is great and the story is really original. I can’t ask for much more from my summer blockbusters. This film struggled to find an audience when it was released in theatres, despite receiving really good reviews. I can only put this down to the general public being turned off by Tom Cruise and his private life, which is a real shame. I hope this film finds an audience on DVD, because it is definitely worth seeing, despite its leading man being a bit cuckoo.

Sally
Edge of Tomorrow is such a cool film. It’s one part Groundhog Day, one part video game. It effortlessly blends comedy, science fiction, and action. It also almost makes me want to describe myself as a Tom Cruise fan, which is really its biggest feat.

It would be easy to dismiss Edge of Tomorrow based on its premise alone. This is a movie about humans desperately fighting an alien invasion, a sci-fi trope that has been explored since the early days of the genre. I mean, Tom Cruise also did the alien invasion thing in War of the Worlds, so what could this movie possibly bring to the table that we haven’t seen already?

The answer is to sprinkle in a little of the Bill Murray classic Groundhog Day. Obviously Tomorrow and Groundhog share a similar premise– a man is forced to relive the same day over and over until he learns how to do it right– but they also share a dark sense of humor. For me, this was the best part of the film. I feel like science fiction has been rather depressing lately. It’s all dystopian futures full of smog and danger. There’s very little hope and even fewer laughs. Tomorrow certainly has its fair share of danger and darkness, but it’s undercut by some excellent humor. This makes the time loop aspect work, it never feels boring watching these events unfold over and over.

Edge of Tomorrow also deviates from most action films by reversing gender roles. Tom Cruise’s character, Major William Cage, is useless. He’s a military man in title only, with no practical combat experience. Conversely, Emily Blunt’s Sergeant Rita Vrataski is a strong military veteran. In most action films the female lead would be the less experienced, more naive character. It’s refreshing to see a woman put into a position of authority. Vrataski is certainly no shrinking violet. She is integral to the final mission’s success and rarely shows fear or weakness.

This is easily one of the best movies of the past year, possibly the past decade. It’s impossibly cool, funny, and never boring. And as much as it pains me to admit it, a lot of the success of Edge of Tomorrow lies in Tom Cruise’s performance. Not only is he intensely charismatic, but he easily carries both the comedic and dramatic elements of the story. Seriously, if he keeps this up I might rethink my dislike for him. 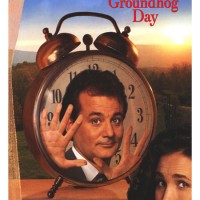