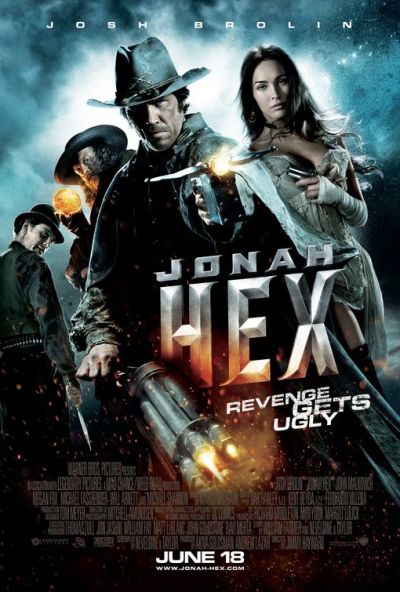 Jonah Hex is based on a DC comic book character about a Civil War veteran who is given supernatural powers after being “mostly” resurrected by a Native American tribe. Jonah’s primary power is the ability to speak with the dead, which he uses to seek revenge on the man who murdered his family. This movie is a cookie cutter Western in many ways. There are few elements to the story that I haven’t seen in any of John Wayne’s films or on an episode of Bonanza. The supernatural bit is interesting, but it feels like a cheap trick to make the story special. What’s worse is that it doesn’t even succeed in doing so.

For what it’s worth, the cast of Jonah Hex is filled with great actors who do a good job with what they’re given. Josh Brolin stars as Jonah, and even though this movie is dull I was still reminded how much I like him. John Malkovich and Michael Fassbender appear as the main villain and one of his henchmen, respectively. Both are great, but obviously better than this movie. Megan Fox is Jonah’s love interest, a prostitute who is also good with a gun and completely lacks any personality. Fox is not a great actress by any stretch of the imagination, but even she seems horribly underused and bored with this film.

My biggest frustration with Jonah Hex is that it could have been cool. Westerns have been threatening a comeback since the mid-2000s, but the genre can’t seem to get a toehold in cinemas. Something like Hex could have helped redefine Westerns for a younger audience… if it was done right. Unfortunately it instead turned out to be a predictable and boring mess.

Ben
If I told you a movie existed that starred Josh Brolin, John Malkovich, Michael Fassbender, Wil Arnett, Wes Bentley, Michael Shannon and Megan Fox, you would probably expect it to be somewhat entertaining. With a cast like that, I would expect it to be amazing. Jonah Hex is not amazing, it is a debacle. One of the worst comic book adaptations I have seen.

Brolin plays Jonah Hex, a former Civil War soldier whose family is murdered in front of him by the villainous Quentin Turnbull (Malkovich). After butchering his family, Turnbull also tortures Jonah, deforming his face. As a result of this attack, Hex finds he now has the ability to talk with the dead. When Turnbull wants to attack the capital, the US President (Aidan Quinn) asks Jonah Hex to intervene and bring Turnbull to justice. Hex accepts so he can finally get revenge for his family’s murder. With the help of Lilah (Megan Fox), a hooker with a heart of gold (are there ever any other kind in movies?), Jonah Hex tracks down Turnbull to get his revenge and save the country.

This is so bad. It feels like such a rushed production. The running time is 81 minutes, including credits. Jonah Hex stinks of studio interference. This was one of Warner Brothers big summer releases and I find it very hard to believe the production started with an 81 minute movie planned. I have a suspicion that the film was longer at one stage, and much darker– something the studio would not be keen on when they were releasing a film intended mostly for kids. We have seen it before where studio involvement will ruin a film (Spiderman 3 and The Wolverine solo flicks are great examples), and it looks like Jonah Hex is another example of that.

I am just amazed that they were able to convince a cast like this to be in a film this bad. Josh Brolin especially, he tries hard, but he just has such a crappy script to work with. This is another reason I suspect this film changed in the editing room. Brolin would not have signed up for this finished product. He was likely pitched something completely different. I also question the casting of Megan Fox, her character is so one dimensional. Jonah Hex seems like a jerk to mostly everyone, yet he has a soft spot for this prostitute. It is never explained why he does, perhaps this was something that ended up on the cutting room floor.

Jonah Hex is terrible. It ranks right up with Elektra and Catwoman as one of the worst comic book films ever made.