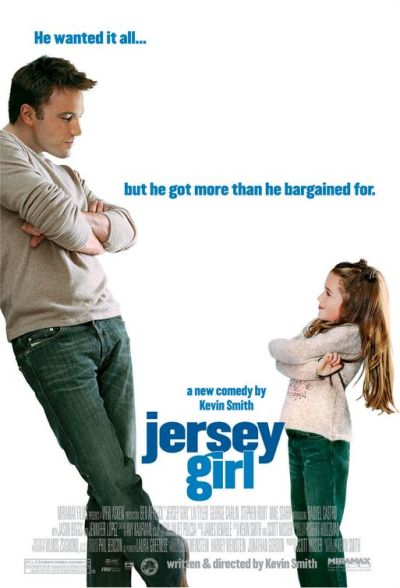 Sally
Now, I wouldn’t consider myself a Kevin Smith fan. I’ve only been familiarized with most of his movies this year, and I like most of them but certainly don’t love them. However, when I saw the DVD cover for Jersey Girl, which proudly proclaims this to be Smith’s “best!”, I laughed and laughed and then showed Ben and we laughed some more together.

To be fair, this is not a terrible movie. It’s just incredibly generic. It could have been made by anybody really. The only aspects that let the viewer know this is a Kevin Smith film are the crude language and George Carlin’s presence. While it’s cool that Smith consistently tries new things, I expect more from him. For all the criticism Jersey Girl received, the formulaic plot is what drags it down, in my opinion.

A lot of flack was heaped on Ben Affleck and Jennifer Lopez, but they honestly weren’t that bad. Lopez’s role was reduced to a cameo after Gigli bombed, so there’s not much to be said about her. I’ve never been a big fan of Affleck’s, but he’s good at playing the jerk here. The real standout of the cast is Raquel Castro, who plays Lopez and Affleck’s daughter. She’s cute, but not overly precocious. Castro actually acts and talks like a real kid, something that is often lacking in movies where the kids are supposed to be normal.

Jersey Girl is kind of weird, because it doesn’t really fit in with any of Kevin Smith’s other films. Having his name attached would also alienate anyone familiar enough with his work to expect it to be much dirtier than it is. Add in the doomed star couple Bennifer and it’s no surprise this movie bombed.

Ben
Jersey Girl is not Kevin Smith’s best work, but it is also not the debacle that many naysayers would have you believe. The movie eventually wins its audience over thanks to strong performances from Ben Affleck, Liv Tyler, and an adorable debut from Raquel Castro as Affleck’s cute daughter.

Affleck plays Ollie, a publicist living in New York with his equally successful new wife (Jennifer Lopez). During the birth of their daughter Gertie (Castro), Lopez dies, leaving Ollie with a baby girl to raise and not much knowledge of how to do it. After a mishap at work gets him fired, Ollie moves back home to New Jersey to live with his father (George Carlin) and raise his daughter among her family. Ollie always longs for a return to the New York and when an opportunity arises, Ollie must decide if he wants to uproot his young daughter to follow his dreams, or if he is already happy living in Jersey. Complicating things further is Ollie’s budding relationship with the local video store clerk (Liv Tyler, also what’s a video store?).

This is a charming film, although it received more press for featuring an onscreen wedding of then super couple Affleck and Jennifer Lopez. It is hard not to be charmed by little Raquel Castro, she is full of energy and I immediately liked her. She is also the spitting image of her onscreen mother. I really feel like Ben Affleck cops way more than he should because of some film decisions he made early on in his career. After the success of Good Will Hunting, he consistently made fluffy blockbusters like Armageddon or generic rom coms with Gwyneth Paltrow. He was never terrible in those films, although the finished product generally did leave a lot to be desired. Because of this, he was continually blasted by the public, never more so than when this film was released. He had recently puked out Gigli and ruined a superhero franchise (Daredevil) so there was not much goodwill toward Affleck at the time of Jersey Girl’s release. This is a shame because it is not a terrible film. It is not great, but it is good enough to keep me entertained for ninety minutes. The trademark Smith humour is littered throughout the script, even if Jay and Silent Bob don’t make an appearance.

Jersey Girl is a decent film that is not as terrible as many critics have said. Affleck gives a strong performance as a single dad trying to do what’s best for his little girl, and Raquel Castro is delightful as his daughter Gertie.