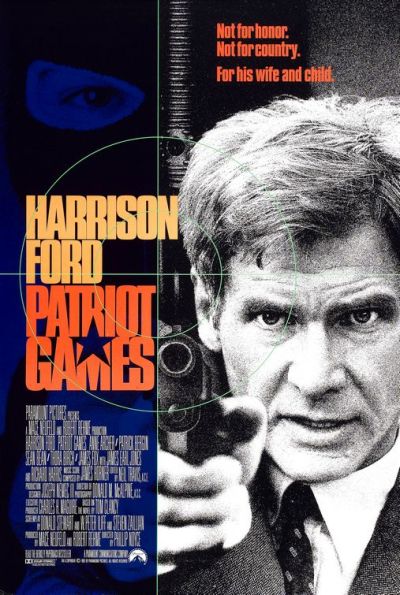 Sally
I’m not sure I really get this whole Jack Ryan franchise. The Hunt for Red October was a very cerebral political thriller. Patriot Games is more your standard action flick, complete with emotional family drama and a happy ending. If I were completely unaware of the recasting of the Jack Ryan character, I would easily think this and Red October were in no way affiliated with each other.

In saying that, I enjoyed Patriot Games more than I did Red October. And no, it wasn’t just because Harrison Ford is in this one. Though it did have a lot to do with it, because as good as Alec Baldwin was in the first movie, I don’t think I could easily believe him as a family man. Ford’s performances in protector/family man roles always feel effortless (Air Force One, Witness, The Fugitive), and Patriot Games is no exception. My preference for Ford over Baldwin in the movie is also influenced by Baldwin’s performance on the TV series 30 Rock. Jack Donaghy is many things, but a champion for the weak is not one of them.

While I enjoyed this movie more than the first, the story is much less of a “thinker.” There are far fewer twists and turns. The plot is emotionally driven rather than political. Even the bad guy (Sean Bean) is motivated to revenge after the death of a family member, choosing to avenge his lose by killing Jack Ryan’s wife and daughter. In that way the plot feels unbelievable, making Hunt for Red October feel 100% plausible as a result. I also miss the intelligence written into the Red October script. There is much less of that apparent here, which disappoints me.

If I were rating Patriot Games on it’s own, without comparing it to the other films in the series, it would probably get a very high mark. It’s a decent action thriller, elevated by a great cast. However, it’s kind of impossible to not raise comparisons to the other films in the franchise. I personally liked this story, but it’s just too far away from what was established in The Hunt for Red October, and made too close to that film’s release date to classify it as a reboot. This disparity is confusing and a little disappointing.

Ben
Now this is more like it. The Hunt for Red October was a letdown, but introduced us to the character of Jack Ryan well enough to get this sequel made. The filmmakers tried to get Alec Baldwin back to reprise the role, but when he wasn’t available, they upgraded in the best way possible by casting one of the biggest stars in the world, Harrison Ford. This story of Jack Ryan saving the royal family from an IRA terrorist attempt and subsequent revenge attack on Ryan and his family is exhilarating.

While holidaying in London, Jack Ryan (Ford) is in the wrong place at the right time, being present as a rogue section of the IRA attempt to assassinate a member of the royal family. Ryan steps in and prevents the attack, killing one of the terrorists, while the others are arrested. After they return home, Ryan and his family discover that the terrorists have escaped from jail. The terrorist Sean Miller (Sean Bean) wants revenge on Ryan as he killed his younger brother. Miller plans an attack on Ryan’s wife and daughter (Anne Archer and Thora Birch). After his daughter is nearly killed after Miller’s attack, Jack reenlists in the CIA to stop Sean Miller and the rest of his posse.

I really like this film. I saw this as a child and loved the action. As an adult, I appreciate this complex story so much more. Harrison Ford is terrific as Jack Ryan. He owns the screen as the CIA analyst who could not stand by and watch an assassination attack on the royal family.

The supporting cast is great here too. Sean Bean is terrifying at times as Sean Miller, the way he opens fire without hesitation to take out Ryan’s wife and daughter is chilling at times. Samuel L. Jackson and James Earl Jones also appear as some of Jack Ryan’s CIA colleagues.

Patriot Games is an exciting political thriller with an awesome cast led by Harrison Ford and Sean Bean. 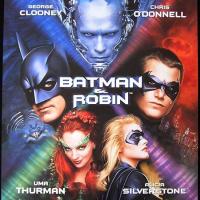