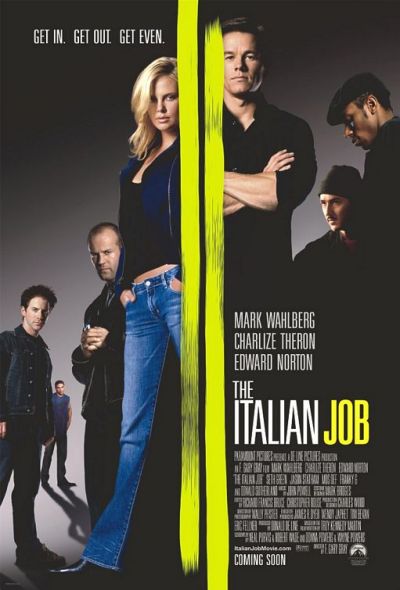 Ben
Let me say from the outset of this review, I have not seen the original version of The Italian Job so I cannot compare it to the original. I’ve heard the original is a lot better, but I had a lot of fun watching this film.

The Italian Job is the story of a crew of robbers. They pull off high risk, high reward jobs. Each member has a specific talent: Charlie (Mark Wahlberg) is the brains; John (Donald Sutherland) is their safe cracker, hoping to retire after one last big job; Handsome Rob (Jason Statham) is the vehicle expert and organises their getaways; Left Ear (Mos Def) is a demolition expert; and Lyle (Seth Green) is a tech expert. Rounding out the team is Steve (Edward Norton), in charge of bribing the locals to turn a blind eye. After the success of their most recent job, Steve double crosses the team and steals nearly thirty million dollars in gold, killing John in the process. A year later, the team is able to find Steve living out their own dreams in Los Angeles. They recruit John’s safe cracking daughter (Charlize Theron) to replace him and set about stealing their gold back.

This film is exciting. It came out around the same time as Ocean’s Eleven and is a similar sort of heist film, with a twist ending that shows how the crew managed to pull off their heist. The opening scenes in Venice are great, as is the finale set amongst the streets of Los Angeles, as Charlie and his crew ride some souped up Mini Coopers around as they try to pull off their revenge heist. Say what you will about Mark Wahlberg, he is a good leading man. He’s charming enough so that you care about him, despite his limited acting skills. He and his crew have good chemistry together. Jason Statham and Seth Green are great in this film, both are really funny. My only real complaint is that Edward Norton doesn’t feel like an adequate villain. Why was he even on the team at the start? He seems to provide no benefit, and then screws everyone over. I’m looking at this with hindsight though, maybe he isn’t as shady as he seems.

The Italian Job is a fun action flick with enough thrills and a fun cast to keep you entertained.

Sally
I remember watching The Italian Job and really wanting a Mini Cooper for about six months after. And that is the entire impression this movie left on me. I didn’t even remember that Mark Wahlberg is the star (I kind of thought it was Charlize Theron?). This is a fun heist film, but it’s not exactly an original one.

Of course, The Italian Job can never be original by virtue of it being a remake. I’ve never seen the British movie this is based on, so my frame of reference is shaped more by similar heist films that came out shortly before it: Gone in 60 Seconds (2000), The Fast and The Furious (2001), and Ocean’s 11 (2001). Heist films– especially those using fast cars– were clearly having their moment in the early 2000s.

This is a good heist movie, and entertaining enough for multiple viewings, but it’s not spectacular. I think The Italian Job suffers from the inevitable comparisons to similar films. Gone in 60 and The Fast and The Furious have better cars, Ocean’s 11 has a better story and cast. It’s impossible to not think of these three movies when watching this one, because it shares many of the same elements. The one thing that sets this movie apart is that it’s the most family friendly of the bunch, which can be a good thing. This would be a fun film to introduce kids to the heist genre. The plot is easy to follow, the cars are cute and kiddy, and there’s no sex and little language (if that sort of thing concerns you).