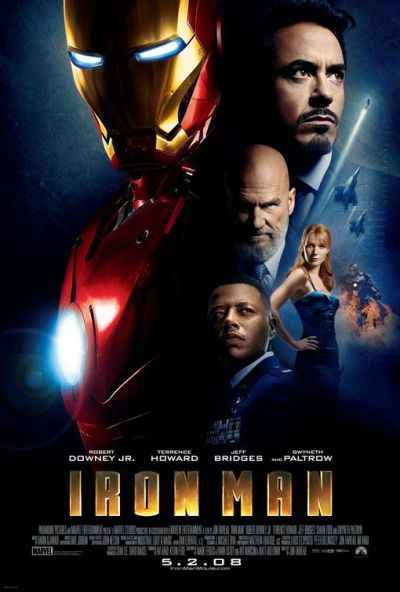 Ben
This is the film that started it all. Iron Man started the Marvel Cinematic Universe, leading to films like The Avengers and Guardians of the Galaxy. Iron Man is a terrific origin story, led by Robert Downey Jr who embodies the character of Tony Stark so well that I can’t imagine anybody else playing the role now. Casting Downey was quite a risk at the time, he was not far removed from a prison stay for drug use, and certainly was not the A-lister he is today. Downey was considered far more like wasted potential than a superhero.

Tony Stark is a womanising genius billionaire. He owns Stark Industries, the largest developer of weapons in the world. While on a promotional tour of the middle east, Stark is captured by terrorists and forced to make them a missile. He also secretly develops a large metal suit and eventually uses it to bust his way out. When he returns to America, Stark uses state of the art technology to create a sleeker version of his flying metal suit, becoming Iron Man and going on nightly trips to the Middle East to stop the terrorist groups that once held him captive. He also runs into trouble in his home country in the form of Obadiah Stane (Jeff Bridges), Tony’s mentor and the man who runs Stark Industries. Stane wants to use the Iron Man technology to create more weapons and will stop at nothing to get it, including destroying Stark and his flashy new metal suit. Iron Man, along with the help of his PA Pepper Potts (Gwyneth Paltrow) and his best friend (Terrence Howard), has to stop Obadiah Stane before he can turn Tony’s new technology into a very dangerous weapon.

The most surprising thing about Iron Man is that it is only six years old. When you think about what this film led too, it is hard to believe. A short clip after the credits of this film introduced Samuel L. Jackson as Nick Fury, planting the seed that one day there might be an Avengers film. Marvel has taken huge risks to develop this world, none bigger than the first Iron Man film. At the time, Tony Stark was not one of their most popular characters and was a strange one to help create the world that would lead to Avengers. When I was growing up, I definitely read comics, and Iron Man was not one of my favourites. I was more into X-Men and Spider-Man, but Marvel had sold the film rights to different studios so they had to work with what they had, which was the Avengers. Part of me would love Marvel to get the rights back to characters like Spidey and Wolverine, but if they did, we likely wouldn’t have the Marvel universe we have today. We definitely would not have Guardians of the Galaxy because Marvel would be focusing on their more popular characters and likely would not be getting to an obscure comic like Guardians any time soon.

Iron Man ended up being the perfect character to jumpstart Marvel’s world. A great performance from Downey and a fun origin story has led to one of the most popular and successful film studios today.

Sally
When I typed the title for this entry I had to check at least three times that I had gotten Iron Man‘s release date correct. This movie just seems more than six years old. For starters, Tony Stark uses a flip phone, and I swore iPhones would have been a thing in 2008 (the first generation was released in June 2007, so they wouldn’t have been a thing during the movie’s filming). Secondly, Stark references MySpace, which seems even more ancient (Facebook opened it’s services to everyone in 2006, though it didn’t overtake MySpace in unique visitors until 2008). But mostly, when you think of everything this one movie has lead to– two Iron Man sequels, two Thor movies, two Captain America movies, The Avengers, Guardians of the Galaxy, Agents of S.H.I.E.L.D.— it doesn’t seem like six years is enough time to contain it all.

Iron Man is the movie that made superheroes cool again. Prior to its release the genre was feeling tired, and for the most part, like something meant mostly for kids. It wasn’t until Tony Stark burst onto the scene that people really started to take notice of comic book movies again. Suddenly the genre was no longer being viewed as cartoony or laughable. It also proved that superheroes didn’t have to go dark and violent to be taken seriously. Iron Man strikes a perfect tone, effortlessly blending action and humor. It’s just as enjoyable to an adult as it is to a child. More importantly, a non-comic book reader can enjoy this movie just as much as a long term fan. Marvel basically established the tone it would seek to recreate in all its future films, and did so perfectly.

Of course a superhero is only as good as the actor portraying him or her, and Robert Downey, Jr. could not be more perfect as genius-billionaire-playboy-philanthropist Tony Stark. Marvel has become a studio synonymous with taking chances, and they made a huge one right off the bat by casting Downey. Some people might forget that in 2008 Downey was still considered a risky hire due to substance abuse issues that landed him in jail in 2001. He also wasn’t an obvious choice for a movie that a lot of people would assume was purely for kids. But there’s no denying the fact that Downey is Tony Stark. He nails the sarcastic, narcissistic asshole aspect of Stark’s personality, and provides the necessary seriousness to make his emotional journey believable.

As satisfying as it was watching Iron Man the first time around, it’s even more satisfying watching it now knowing what is to come. The success of this one movie effectively launched the Marvel cinematic universe, and no doubt inspired people worldwide to pick up a comic book for the first time ever. It’s nice to see this genre finally get the respect it deserves.