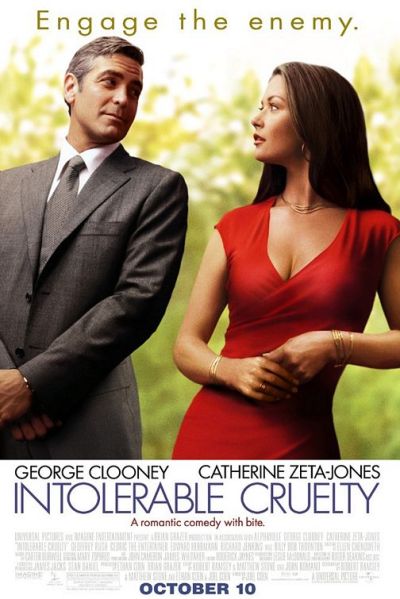 Ben
This feels like the perfect role for George Clooney. It takes full advantage of the fact that Clooney is one of the most charismatic men alive, despite the fact he plays a sleazy divorce lawyer who represents men adulterers and usually wins.

Clooney plays Miles Massey, who has just been hired to represent Rex Rexroth (Edward Herrmann). Rex’s wife, Marilyn (Catherine Zeta Jones) has hired a private investigator (Cedric the Entertainer) to follow her husband and he has provided her with footage of Rex’s infidelity. Miles takes this case on as some sort of challenge to see how good he is. Can Miles win the case for his client when there is actual video footage of him cheating? The short answer is yes, which makes Marilyn really angry and out for revenge. Marilyn and Miles begin a relationship, but how much can they trust each other after everything they have been through.

This is a pretty dark comedy. Many of the characters are not likable at all, even Clooney’s womanizing lawyer is hard to love. The only reason you do is because Clooney is such a charmer. Catherine Zeta Jones is evil, a role she plays well. I have a theory that she is horrible in real life, and that is why she is so good at playing these awful characters.

This is a film by the Coen brothers, and it feels like it. Intolerable Cruelty has witty dialogue and a cast of questionable characters, two staples of Coen brothers movies. I enjoy their films, but the only one I have really loved is The Big Lebowski.

Intolerable Cruelty is a dark comedy, sold well by the performances of George Clooney and Catherine Zeta Jones. It is not the Coen brothers best film, if you want that, go and watch The Big Lebowski.

Sally
This is a movie that I had literally never heard of until just now. I was unaware that the Coen brothers ever ventured into rom-com territory, and I gotta say… I’m underwhelmed by their efforts. Intolerable Cruelty isn’t intolerable to watch, but I wonder what made these guys want to make this movie in the first place.

The best part of this movie is the cast, who all seem to be having a lot of fun in their respective and often wacky roles. George Clooney plays a charming yet jaded divorce lawyer, a role that I feel is just Clooney being Clooney (that is, up until his recent nuptials). He’s an actor who is always fun to watch and this is no different. Catherine Zeta Jones is a golddigging divorcee on the hunt for her next husband/alimony check. It’s a pretty stereotypical and insulting role for any woman to play, but then this isn’t the most progressive film in that regard (more on that later). Billy Bob Thorton plays a somewhat soft spoken supposed oil millionaire. He really nails these awkward characters, evidenced here and in his recent guest appearance on The Big Bang Theory (which was incidentally the first time that show’s been funny in years).

However, the plot of Intolerable Cruelty is weak. There’s a lot of cheating and lying and signing pre-nups and ripping them up, and it all gets to be tedious by the end. The happy ending is spotted a mile away, though I don’t think there was much effort to conceal it. What this movie has in Coen black comedy goodness is mostly negated by a storyline that could easily be the focus of a Reese Witherspoon rom-com, provided it was made a little less dark. I also can’t decide if the plot is sexist in an ironic-and-funny way, or if it’s sexist because it is sexist and no amount of Coen wit can save it.

As I said, this isn’t a terrible movie– it’s just nothing special. It seems odd that such great actors and filmmakers would choose to make this film. If they made it to satirize the romantic comedy genre, then they needed to do something more to get that point across.