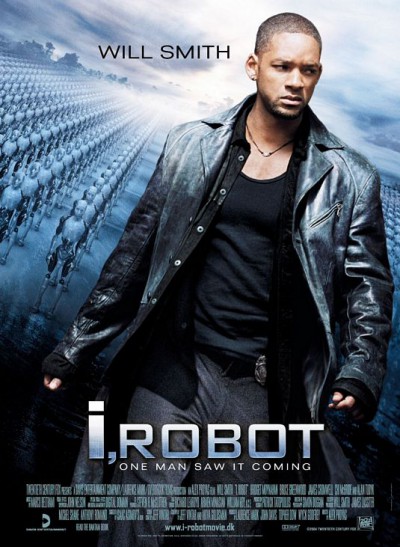 Ben
Will Smith has had a lot of luck with science fiction, highlighted by the Men in Black series and Independence Day. I, Robot was supposed to be another entry into Smith’s stellar career, where he is usually able to mix his crazy charisma and charm with an out of this world story. Unfortunately, I, Robot struggles to meet Smith’s usual standards, despite him being just as charming as usual.

I, Robot is based on the classic book by Isaac Asimov. Smith stars as police detective Del Spooner, he is investigating the recent murder of Dr Alfred Lanning (James Cromwell), a scientist at a company that makes robots. The prime suspect in this murder is a robot named Sonny (Alan Tudyk). If this is true, it would be the first time a robot has ever committed a crime, let alone a murder. They have programming in them that prevent them from hurting humans, but Spooner is distrustful of robots due to a past experience where they saved him over a little girl who was drowning after a car accident. Spooner must find out the truth behind Lanning’s murder, eventually discovering a much bigger conspiracy.

I did not enjoy I, Robot that much. There is something missing from Smith here. His bread and butter is playing a happy go lucky wise cracking fresh prince, but Del Spooner is usually depressed and suspicious of everyone. It is a role that Smith struggles with. He’s at his best when being charming and funny, and Will Smith is neither in I, Robot.

The supporting cast is not great. Bridget Moynahan plays a robot doctor who helps Smith uncover the secrets behind Lanning’s murder, but she is very wooden. Bruce Greenwood also turns up as the head of the company making robots, he is fine.

I, Robot is one of Smith’s rare missteps for me, he should stick to being a fun loving wise cracker, because dark and brooding don’t really work for him.

Sally
I don’t really know what to say about I, Robot. My dad and I tried watching it on television once years ago. We both found it so boring that we changed the channel. I’ve never had any desire to see how the movie unfolds, so I wasn’t particularly excited to finally watch it in full now.

I’m hard pressed to remember the plot of this movie, because it was not compelling. The script cobbles together elements from science fiction writer Isaac Asimov’s work with concepts from other sci-fi films, creating a needlessly complicated story. I have no problem with the idea of expanding on Asimov’s ideas or borrowing elements from multiple stories to create a feature length film, but I, Robot attempts to cram too much into one movie. It tries to spark too many discussions and fails at addressing any of them adequately.

Smith does well with what he’s given to work with. He’s the type of actor who can still deliver a great performance given a bad script, and this is no exception. However, this is a movie that cannot be salvaged by Will Smith’s charisma alone. I, Robot feels like a lackluster imitation of his better films, and ultimately drags Smith down with it. It doesn’t help that the titular robot seems more human than Smith’s costar Bridget Moynahan. I can only assume that she’s meant to feel “robotic” because she is playing a robopsychologist. She’s usually much better.

I, Robot attempts to be lofty science fiction but mostly fails. The special effects are better than the actual story that it tells, and the actors have a difficult time making anything of the script.