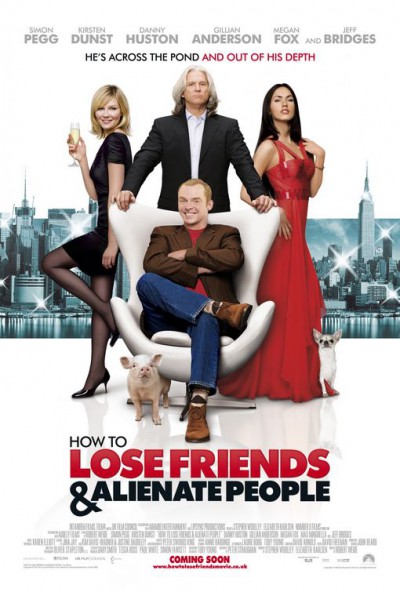 Sally
This was a very terrible movie. I expected so much more from Simon Pegg, especially after watching Shaun of the Dead and Run Fatboy Run. But How to Lose Friends & Alienate People is full of characters I do not care about, and as a result is boring.

I’m not really sure what this movie was trying to be. At times it seems like a raunchier, more male friendly version of The Devil Wears Prada, following an English journalist (Pegg) learning the ins and outs of working at a glossy American magazine. This would be fine if the movie really ran with the concept, but instead it decides to also be a romantic comedy. The problem here is that the two romantic leads (Pegg falls for Kirsten Dunst) never seem to have anything but open contempt for each other.

Honestly, I don’t know what else I can say about this movie. Pegg does what he can with what little he is given to work with. Dunst’s character feels shoehorned into the story. Megan Fox is just a pretty face. Jeff Bridges is definitely better than this. But why any of these actors decided to participate in this movie is quite frankly puzzling.

Ben
How do you lose friends and alienate people? I would guess the easiest way to do it would be to make a film like this.

How to Lose Friends and Alienate People can’t seem to decide what it wants to be. Is it a gritty behind the scenes look at the cut throat magazine industry a la The Devil Wears Prada, or is it just another sappy romantic comedy? I would say it is closer to the latter, except not funny, and the romance plot revolves around two people you generally do not care that much about.

Simon Pegg plays Sidney Young, a British journalist looking to make it big in New York. He has made a name for himself in England with an underground newspaper that ripped celebrities apart, which he is planning to do again when he gets hired at a top fashion magazine. He quickly realises that if he spends most of his articles blasting celebrities, they will likely not talk to him very often. Sidney needs to learn how to play the game, but still keep his journalistic integrity intact. He also has to deal with a budding romance with another reporter (Kirsten Dunst) who is also sleeping with her boss (Danny Huston).

There is not much to write about this film. It is not very funny, and does not give you the type of insight into the glossy magazine industry you would be hoping for. Simon Pegg’s character of Sidney is not very likable. Most of the time he comes across as a jerk, which is not what you want out of your leading man. His romance with Dunst is boring, especially when she is hung up on her married boss. There is also an appearance by Megan Fox as a young actress Sidney wants to hook up with. She plays the vapid actress fine, but her performance is nothing special. She is a lot more convincing when her supporting actors are transforming robots, and even then, they sometimes outshine her. Jeff Bridges also appears as Sidney’s boss. I am not sure how Bridges makes some of the casting decisions he makes. For every Big Lebowski, there is a stinker like this that makes me wonder how many films does he do purely for the money.

How to Lose Friends and Alienate People is a romantic comedy dressed up as a peek into the mysterious and glamorous world of fashion magazines. Unfortunately, it is nether funny and the characters are largely unlikeable so you don’t really care if they find any sort of romance.