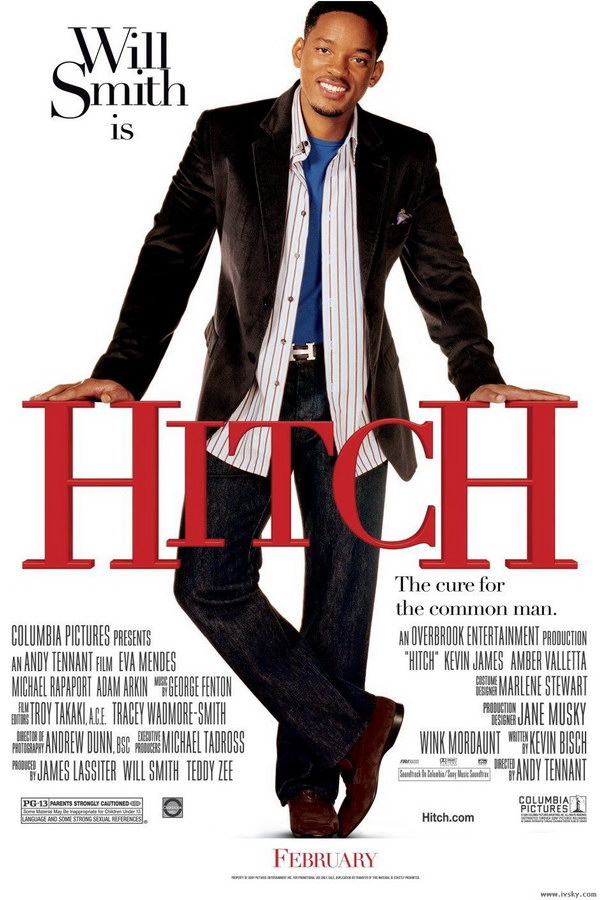 Sally
I really disliked Hitch the first time I watched it. I don’t really know why either, because it’s really just a generic rom-com. It’s not Will Smith’s best work, but there’s nothing particularly terrible or offensive about the movie. I still don’t love it, however I wouldn’t refuse to watch it again.

My best guess as to why I didn’t like this movie is the premise starts out a little terrible: Smith plays Alex ‘Hitch’ Hitchens, a “love doctor” who helps hapless men get the attention of their unknowing crushes. On the surface it’s a little too cutesy, and a tad creepy. It’s one thing for a guy to find out a woman’s interests and hobbies and use them to try to meet her. It’s quite another to hire a man to orchestrate the perfect “meet-cute” to sweep her off her feet. I think I never really got past that part, and either missed (read: fell asleep) or disregarded how Hitch runs the show after the men have gotten that first date.

Basically, Hitch gets the men in the door, but after that it’s up to them to charm the lady. They get some coaching from Hitch to ensure success, but it’s actually just sage advice: really listen to her when she talks and respond to what she says, take a genuine interest in her interests, and don’t try to be someone you aren’t. It’s the kind of rules that everyone should be following in all their interactions. Furthermore, he only helps men who actually want a shot at a long term relationship, at one point even refusing to help a creep who is only looking to get laid (I may have dozed off before this part on my previous viewing, as I had no memory of this scene). Hitch really is a noble guy, helping men with good intentions who just need a little nudge in the right direction or a confidence boost.

So that’s the “hook” to set this apart from other romantic comedies, but in the end it’s really generic. It’s predictable, yet still fun to watch. Will Smith also brings his trademark charm that always makes his movies seem special. It nearly does the trick here, but doesn’t quite disguise that Hitch isn’t much different than most movies of the genre.

Ben
I can’t think of anyone better to play a charming love doctor than Will Smith. The man is just so likable, I believe he would be able to help these dorky guys and give them the confidence they need to bag the girl of their dreams. I have talked in a previous review how likable Smith is, and he is again in Hitch.

Smith stars as Christopher Hitchens, renowned atheist, Wait!!! That’s not right. He stars as Hitch (we never learn his first name), he is in the profession of helping lonely clueless guys sweep their dream women off their feet. He is very careful about who he helps and only assists men who have good intentions. He has become something of an urban legend around New York, and an aspiring reporter (Eva Mendes) sets out to find if he is real or not. In a completely random meeting, Hitch tries to pick up Eva Mendes in a bar and is blown off. This is something he is not used to, so decides to pull out all the stops to get her to go out with him. Will Hitch’s charms work on Eva Mendes before she discovers who he really is. Can Hitch also help his new client (Kevin James) pick up a wealthy supermodel (Amber Valetta), only time will tell.

This is a nice film, even if a little bit hypocritical. Hitch refuses to work for sleazy men that only want to get a woman into bed, yet he comes across as just that type of guy. There is a boring back story about how he was burnt by an ex during his college years, but I found it a bit weird that he seemed to be the very type of guy that he refused to work with.

Other than that, there is fun to be had here. Smith and Mendes have terrific chemistry with each other. The scenes with Smith and Kevin James are also a lot of fun, particularly when he teaches James how to dance and how to perform the first kiss. I also really enjoyed the cool soundtrack enough to go out and buy it when this film was first released.

Bottom line, this is a charming romantic comedy and not much more. Smith and Mendes are fun and charming enough to entertain me for 90 minutes, and Kevin James and his slapstick shtick is always welcome. You might not remember Hitch a few days later, but it is good enough to waste 90 minutes on a lazy Sunday.