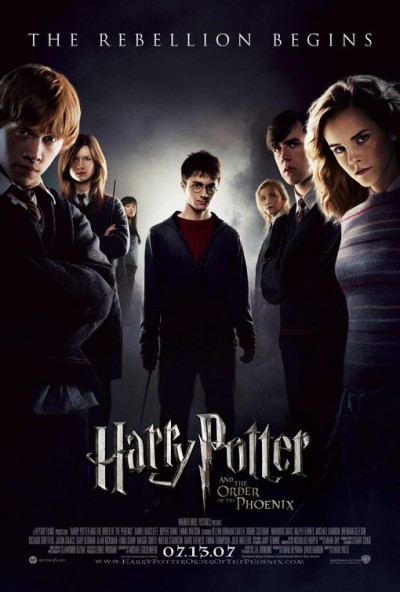 Sally
When it was announced that the final Harry Potter book would become two movies there was a backlash and cries of “money grabbing” from some, but I was super stoked. This seemed like a logical move that should have been made starting with Order of the Phoenix. It’s not just that the books had started getting longer, but the stories were getting more complex. Yes, there are lots of important things missing from this film that were better explained in the book (are you sensing a theme?), but this movie manages to pack a lot of the story in. It also absolutely nails what it does include, making it both excellent and difficult to watch.

The most rousing success of Phoenix is its portrayal of Dolores Umbridge. For anyone not in the know, Umbridge is probably the most hated character in the entire Potter series. She is worse than Voldemort, and that is absolutely not an exaggeration. This book is the most aggravating to read because of this character, and the movie lives up to the book in this regard. Umbridge is perfectly played by Imelda Staunton, who very nearly steals the show. It’s amazing how spot on she is to what I imagined in my head when reading the book.

Another standout actor introduced in this film is Helena Bohnam Carter as Bellatrix Lestrange. Again, her portrayal is almost spot on to what I imagined when I was first introduced to the character. She is gleeful in her hatred of muggles, reveling in violence and chaos. I could not think of a better actor to play someone so insane in her devotion to a mass murderer, thanks to Carter’s history of playing similarly strange characters.

There is a lot of action in Phoenix, as with all Potter films (Dumbledore vs Voldemort is by far the highlight of this movie), but the highlights are really in the character development. This is the story where we finally get to see another side of Harry. He has reached his angry and defiant teenage years, where he wants to be treated like an adult even though he is still very much a kid. I identify more with other characters in this series (hello Hermione and Luna!), but Harry in this story definitely speaks to my inner rebellious teenager. There are also some nice scenes between Harry and Sirius, though their relationship is truncated to the point where Sirius’ death is less emotional than it was in the book.

I know Ben feels this is the weakest in the series, but I still like it better than Chamber of Secrets. Again, my feelings are strongly colored by the books, and I’ve always liked this story more. It’s also much darker and filled with more mature themes. The series has left the kids’ stuff far behind, and keeps getting better because of this.

Ben
I think I’ve said this for every review of this series so far, I’m not sure what else I can say that hasn’t already been said. These films are great, although this fifth instalment of the Harry Potter saga is, in my opinion, the weakest of the Potter films, it is still really well done with an exciting set piece as a climax. It is the first time we get to see real wizards fighting with each other, leading up to a climax when Dumbledore (Michael Gambon) and Voldemort (Ralph Fiennes) finally square off. It is very exciting and the effects are great.

This story will always be special to me as it was the first Harry Potter book I read. It was the first one released after the movies came out so I grabbed it, not realising it was set so far from the two movies that had been released at the time. I read this one and enjoyed it, so I went and read the four books that preceded it. After that I read them in order. I’m sure that Sally is outraged that I read them out of order*, but hey, I’m outraged that she doesn’t like the Star Wars prequels as much as me** so we all have our issues.

Outside of the wizard fighting scenes, my favourite aspect of this book are the scenes with Harry (Daniel Radcliffe) and his Godfather, Sirius Black (Gary Oldman). It is the first time we see Harry with some sort of family in his life outside of the horrible Dursleys, who still treat him terribly. It was nice to finally see him have that male father figure in his life, and Oldman is fantastic in the role. It is amusing to me that children only know Gary Oldman as Sirius Black and Commissioner Gordon from Chris Nolan’s Batman films. Whereas, for me, he will always be remembered more as a villain from films like The Professional, Air Force One, or Dracula. He does crazy so well, it was a bit strange to see he could also play the good guy. That says a lot about his talent that he is able to play both types of roles believably.

Despite being the weakest film in the Harry Potter series, the Order of the Phoenix is still a solid film and continues Harry’s story well.

*I am.
**Why would this outrage anyone? It’s the prequels, not the originals. Dud.