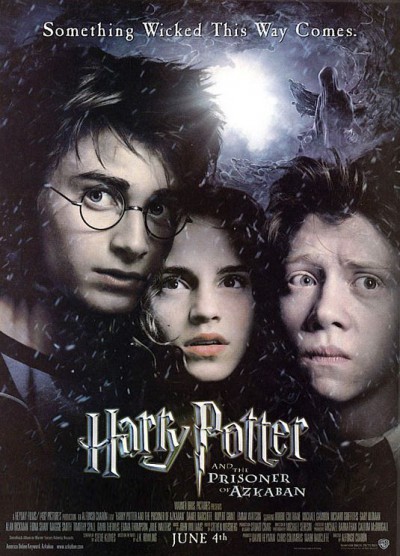 Sally
I really love how this film series progresses. It definitely started out as a kid-friendly franchise, but managed to keep pace with the maturing characters and story lines as the movies progress. Prisoner of Azkaban is the true beginning of this shift, boldly incorporating a darker, more artistic visual style and adding more character development.

The credit for these much needed changes goes to director Alfonso Cuarón. Chris Columbus did a great job directing the first two films, however I don’t think he would have been up to the task this time. He was good at the “kid’s stuff,” but Prisoner of Azkaban is a more mature story. The young characters are hitting puberty, while simultaneously dealing with things like betrayal, depression, and death. It’s not all trolls in the bathroom or spiders in the forest– this time Harry is fighting the kinds of monsters that we face every day in the real world.

Azkaban has always been one of my favorite Potter books (it has time travel!), so I have a complicated relationship with this movie. On the one hand I love it. The darker tone fits the story perfectly, and Cuarón’s artsy flourishes are absolutely gorgeous (I especially love the transition scenes featuring the Whomping Willow, used to illustrate the passing of the school year). On the other hand, this is the first movie in the series to seriously sacrifice parts of the original book. I understand that the movies can’t cover every nook and cranny of JK Rowling’s enormously detailed universe, but there were portions of this story that I feel should have been given more care. The best examples of this is the origin of the Marauder’s Map. Glossing over the fact that Harry’s dad was one of the Marauder’s (and never really explaining the nicknames Moony, Wormtail, Padfoot, and Prongs) means you also lose the symbolic importance of Harry’s Patronus. It also makes the revelation that Peter Pettigrew was the Potter’s betrayer a little less dramatic, because it doesn’t quite sink in that he was one of their best friends.

But for all its faults, Prisoner of Azkaban is a gorgeous film. It took the series in a more mature direction at the time it needed it most. Things will only get harder for Harry and his friends from here. This movie sets the stage for the battles to come perfectly.

Ben
The third Harry Potter film feels like a change in direction in some ways. Director of the first two films, Chris Columbus has been replaced by Alfonso Cuaron (Gravity) and the series feels much more mature because of it. One of the things I really like about this series is that it grows as the characters do. In the first two films, Harry is 11 and 12 and those movies feel like they were made for kids. As Harry enters adolescence, the films mature with him, becoming darker with more adult themes throughout.

The Prisoner of Azkaban picks up with Harry (Daniel Radcliffe) about to enter his third year of Hogwarts. All anyone is talking about is the mysterious Sirius Black (Gary Oldman) and how he has managed to escape from the wizarding prison known as Azkaban. As Harry returns to school, he realises this Sirius character may have more to do with his past than he first thought. Along with his trusty sidekicks, Ron (Rupert Grint) and Hermione (Emma Watson), and their new Defense Against the Dark Arts teacher, Professor Lupin (David Thewlis), Harry will discover who Sirius is and how he was involved in his parents’ deaths.

It really is amazing how different this film is from the first two when really the only thing that has changed is the director, but this really feels like a different film. This film feels like we are seeing sections of Hogwarts that we have not seen before, like Columbus was hiding them from us for some reason, but Cuaron wants his audience to see every section of this magical school. It is a fantastic continuation of a series that was already great. I really enjoyed seeing these three child actors grow up before you. This is the first film where they start to film like little adults and not just children. They are really starting to embody the characters they play. Radcliffe is starting to feel like he might be the ‘boy who lived’, while Rupert Grint is coming into his own as Harry’s funny best friend. His comedic timing is one of the film’s highlights for me, and only gets better as the series continues. Emma Watson is also fast becoming known only as brainiac Hermione. All three of these actors will have trouble breaking away from these roles, just ask Mark Hamill.

One thought on “Harry Potter and the Prisoner of Azkaban (2004)”