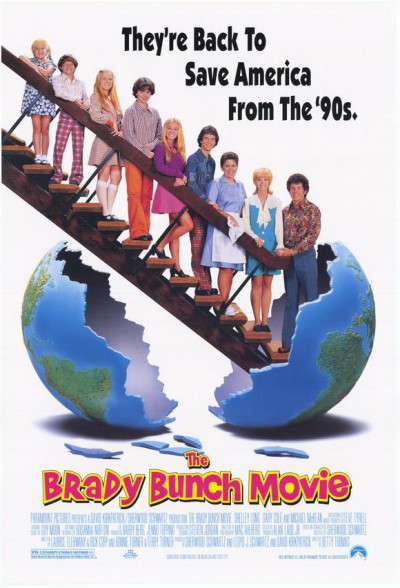 Sally
This is one of the best movie adaptations of a television show ever made. No, seriously. This is a terrific movie. It perfectly captures the spirit of the original sitcom, while still poking fun at the TV show. There’s a lot of fun to be had here.

The Brady Bunch Movie can be summed up in one word: ridiculous. For any other movie this would be a mark against it, but here it is perfect. There is no other way to make a movie out of The Brady Bunch without making it ridiculous, because the television show itself was ridiculous. I mean, this was a show that aired during the Vietnam War, and yet none of the characters worried that any of the Brady boys might someday be drafted. In fact, the show hardly made reference to any current events. The Bradys lived in a bubble, penetrated by the outside world only when wholesome celebrities like Davy Jones or Joe Namath wandered in.

This movie attempts to burst that bubble, but to no avail. The Brady family remain optimistic, happy, and more than a little naive despite being shoved up against the hardened, cynical 1990s. They’re still living in their falsely perfect 1960s/70s world. They’re still singing about sunshine days and putting on their Sunday best to go to Sears. They’re still believing that everyone will always do what’s right and good, despite all evidence to the contrary. It’s hilarious to watch, and the gag remarkably holds up over an hour and a half.

In the end everything works out for the Brady Bunch (because of course it does). There are fun cameos from the original television stars and Davy Jones, and more than enough polyester clothing. If you were a fan or even just a casual watcher of the TV show you’ll enjoy this movie. Anyone not familiar with the source material will miss nearly all the jokes, so please do yourself (or more accurately, your kids) a favor and catch the show in syndication before watching this.

Ben
We have watched several movies based on beloved television shows so far, and these remakes tend to go one of two ways. They either are as faithful to the source material as possible, like The Fugitive, or they spoof it outrageously, like 21 Jump Street did. Both can work, but I feel like the films that spoof their source material get it right more often than not. A lot of the time, the show just is not relevant anymore as society has changed so much since it was popular. The Brady Bunch Movie takes the route of spoofing its source material, and does a fantastic job of it. Let’s face it, a saccharine premise like The Brady Bunch just doesn’t work in today’s world where over half of marriages end in divorce and people are just generally far more negative than they were in the flower powering 70s. This film puts the Bradys into a 90s world, but still keeping their 70s ideals. They are outcasts now, whereas in the 70s they were what every family aspired to be.

Of course, there is also a plot for this film. The Bradys find out they have a large tax bill and owe the government $20,000, and need to pay it within a month. This is music to the ears to their nasty next door neighbour (Michael McKean), who wants to buy their house and get rid of them forever. Mike Brady (Gary Cole) has to sell one of his house designs quickly so he can ask for a $20,000 advance and save his family home before it is auctioned off to the highest bidder. The Brady youngsters are also willing to help out the family. They decide to enter a singing contest that, surprise surprise, also offers a $20,000 reward.

As you can see, the plot is not important for this film. We just need an excuse to see these happy go lucky Bradys interacting with the sullen grungy 90s generation. It works really well. The cast is perfect. Shelley Long and Gary Cole are great as the husband and wife Carol and Mike Brady. All of the family capture their 70s counterparts really well. The film is very funny, and has some great cameos as well.

The Brady Bunch Movie is a lot of fun, and one of the better adaptations of a television show that I can remember.