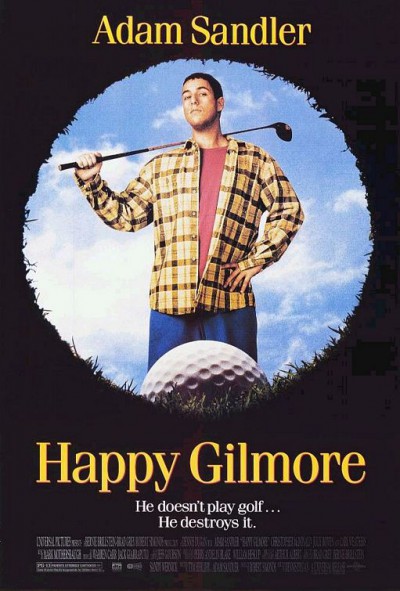 Sally
I was very nervous about re-watching Happy Gilmore. Thus far in the blog, Adam Sandler movies have mostly been disappointments. Was Sandler really a comedy genius, or was young Sally just a complete idiot? This movie would be the decider, because of all his early comedies Gilmore was always my favorite.

Personally, I still find this movie funny. Whether or not Sandler is a great comedian is still up for debate, because a lot of my love for Happy Gilmore could easily be chalked up to childhood nostalgia. This was one of the rare comedies that my entire family liked. My dad, a lifelong hockey fan, enjoyed the sports angle. I have many memories of him attempting to slap shot golf balls in our backyard. My sister and I liked the general goofiness. Watching The Price is Right‘s Bob Barker knock out Happy was a highlight, as were many of Sandler’s violent outbursts (“Are you too good for your home?!”). I think my mom just liked it because it wasn’t filled with gross out humor or much language. It’s not something one would classify as ‘family friendly,’ but for our family it was close enough.

Let me be clear– this is typical Sandler obnoxiousness. But the difference between something like this and his later films is that the man-child schtick hadn’t worn thin yet. It also helps that Happy is shown to be a good guy from the start, instead of sending him on a journey to learn how to care about others. It’s a lot easier to forgive the character’s flaws knowing that his actions are motivated by his grandmother.

So it appears Adam Sandler’s reputation isn’t completely unwarranted. While I’ll always prefer him in romantic comedies co-starring Drew Barrymore, he once shone bright on his own. Happy Gilmore is still hilarious, if not the smartest comedy every written. But sometimes that’s all you really need.

Ben
I’m always a bit apprehensive watching movies I used to love as a teenager years later. Do they still hold up and make me laugh? Happy Gilmore does. This is one of Adam Sandler’s best films in my opinion, and is still funny today. Happy Gilmore is funny, it comes from a time before Sandler’s usual angry schtick had become tiresome.

Sandler plays the title role of wannabe hockey player Happy Gilmore, the only problem is he can’t skate. Happy does have a huge slap shot though, which he eventually discovers is also a good skill to have while golfing. He takes up the sport to help save his grandmother’s house from being sold due to a large tax bill she owes and Happy eventually earns a call up to the PGA tour, infuriating the traditionalists with his loud and obnoxious behaviour. He ends up being really popular with fans so the tour officials are hesitant to reprimand his behaviour too much. The only person who is determined to see the end of Happy is resident number one golfer and professional douche, Shooter McGavin (Christopher McDonald). With the help of former golf pro, Chubbs Peterson (Carl Weathers) and a PGA PR girl/love interest (a very young Claire Dunphy), Happy must stay clear of Shooter’s tricks to get him kicked off the tour and keep earning some cash if he is ever going to save his grandma’s home.

This movie is still very funny. Sandler has lost his way lately, but this is him at the top of his game. He is perfect as the uncultured buffoon who turns the uptight world of golf upside down. His fist fight with former The Price is Right host Bob Barker being a highlight of the film for me. Carl Weathers is also having a lot of fun as his mentor who lost his hand to a gator while he was playing.

Happy Gilmore is a fun film and definitely up there with some of Sandler’s best work. It is still really funny, despite being nearly 20 years old.