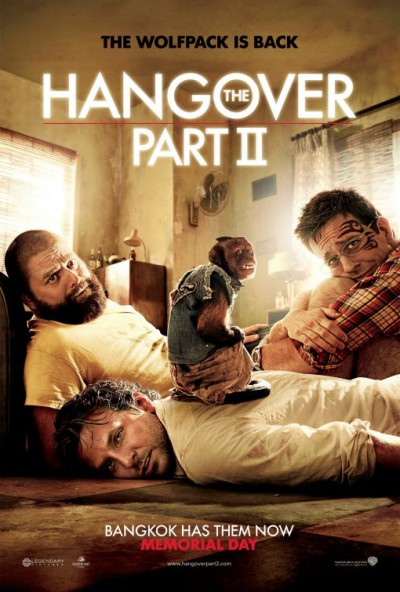 Sally
I didn’t like The Hangover Part II at all when I first saw it. However, it was much funnier this time around, or perhaps it’s just funnier than I remembered. Still, there is something missing from this sequel. It’s just not as fun. Everything is there– same great cast, off-color jokes, outrageous situations– but the story falls flat.

My biggest issue with this movie is that it places the cast in an inherently more dangerous situation than the first. This time around the boys are partying in Bangkok prior to Ed Helm’s nuptials, and wind up losing his fiancee’s little brother on their wild night out. Characters often repeat the line “The city has him now” in reference to the missing underage teen, signifying that he will very likely never be found, or worse, may already be dead. Obviously the kid will be found (virtually) unscathed, but I still feel this was too dark of turn for this franchise. The Hangover was happier, and the danger never seemed that dangerous. The sequel is filled with danger at every turn. There are very few reveals that are purely comedic, and some would have major ramifications in their lives once they got home. (I was particularly unhappy with the inclusion of Ed Helm’s character having sex with a Thai prostitute. He’s days away from getting married, and could have contracted an STD that would be passed to his new wife. Sorry, but that’s not really a situation to make light of, in my opinion.)

That said, there are plenty of funny lines, most of which are delivered by Zach Galfianakis. He was the break out star of the first movie, and this one builds on that. This film also gives a bigger role to Ken Jeong, though I’m on the fence as to whether this is a good thing or not. He was great in small doses the first time around, but I often found him more annoying than funny here. Bradley Cooper and Ed Helms are much the same as before, and the terrific chemistry the cast shares is still evident.

If you’re looking for something completely different, this is not it. The basic plot remains the same, but it still works reasonably well. I just wish there was more joy to the story. Vegas was fun, Bangkok veers dangerously close to a nightmare.

Ben
This sequel to the brilliant original was actually a lot funnier than I remember. I think the biggest problem with this film is that it is basically the first film redone, except this time the guys black out in Thailand instead of Las Vegas. There are quite a lot of laughs here and the ensemble cast is still really solid, but the originality from the first film is missing, which detracts from the film somewhat.

This film picks up a couple of years after the guys forgotten bachelor party in Vegas. They have assembled in Thailand for Stu’s (Ed Helms) upcoming nuptials, who has barely recovered from his adventure in Vegas involving missing teeth and marrying a hooker. He has found a nice girl to marry (Jamie Chung), despite the fact that her father thinks he is a wimp. The night before his wedding, the guys gather on the beach for a few innocent drinks and, as you can imagine, they wake up in the morning at a seedy apartment in the middle of Bangkok, not remembering a thing. The guys have to find the bride’s brother Teddy (Mason Lee) and get Stu to the alter in time for his wedding.

As you can see, this is basically the first film again, except in Thailand. The film still has quite a few laughs though. I was really impressed that they managed to keep the ensemble cast going for this film. Zack Galifinakis was clearly the breakout star of the original film, and it would have been so easy to give his character a much larger role, while the others sat back and watched. The film does a really good job of not letting that happen. Bradley Cooper, Ed Helms and Galifianakis still work really well together and have really good chemistry with each other. I was a little disappointed that Doug (Justin Bartha) managed to stay out of the action again this time. I think that might have been a fun way to mix things up a bit, by having the guy who was missing in the first film along for the ride this time.

The Hangover Part II is still a funny film, much funnier than I remembered it being. The cast is solid, and work really well together. The only negative I can say about this film is that it copies the first one too much. The great sequels switch things up and build on what happened in the previous films, this one just rehashes what worked the first time. This is still funny, but will never reach the highs of the original.