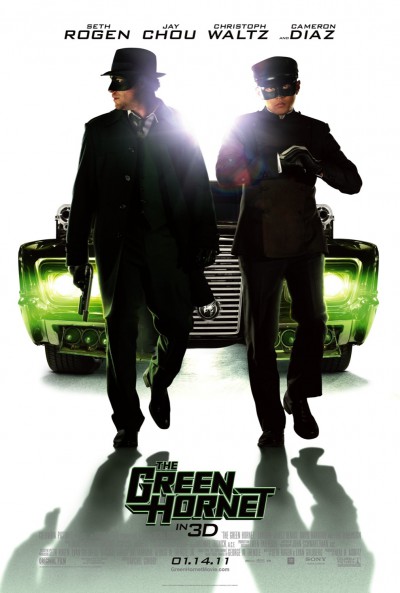 Ben
The most surprising part about this film is that it is actually decent. When it was announced that overweight comedic actor Seth Rogen was going to be playing a super hero, I was less than enthused, but he does a really good job. Rogen has clearly hit the gym to prepare for the role. His charm, comedic ability and chemistry with his sidekick, played by Jay Chou, carry this film really well.

Rogen plays Britt Reid, an irresponsible trust fund kid who lives off his father’s (Tom Wilkinson) fortune. When his father dies unexpectedly, Britt inherits his paper and is forced into responsibility against his will. When he realises there may have been some foul play involved in his father’s death, Britt teams up with Kato (Jay Chou), a mechanic/coffee maker employed at his dad’s house, to find out the truth and put a stop to the crime that plagues Los Angeles. His insane plan involves convincing everyone that he is actually a criminal and infiltrating the crime scene that way. He eventually crosses paths with Los Angeles crime kingpin, Chudnofsky (Christophe Waltz), and must save the day, as well as the life of an attractive new journalist at his newspaper (Cameron Diaz).

This film really surprised me, mostly because it wasn’t terrible. Rogen and Chou have terrific chemistry, their banter throughout the film is very funny, particularly when they are first starting out as crime fighters. The film has some terrific action sequences, mostly utilising the martial arts skills of Jay Chou, but Rogen has his time to shine too. I have come to expect Seth Rogen films to be funny, and The Green Hornet doesn’t disappoint. Rogen is really funny, but Jay Chou has some great one liners also. There is also a very funny cameo by one of Rogen’s best buddies at the very beginning of the film.

There are definitely better superhero films going around, but Seth Rogen and Jay Chou’s chemistry and charm, coupled with my very low expectations, made this a fun movie that I enjoyed a lot more than I thought I would.

Sally
This movie was supposed suck, right? That’s what I’d always heard about The Green Hornet, so I was less than thrilled at the prospect of watching it. But you know what, I rather enjoyed this flick. It’s an interesting take on the old “rich playboy moonlighting as a superhero” story. Plus, Seth Rogen is just such a lovable oaf. I’d watch pretty much anything he’s in and have fun doing so.

I think I liked The Green Hornet so much because I had no preconceived notions about this character. I had a vague idea that it was maybe a television show? (It was a radio program first, apparently, and later featured in comic books.) Kato was a name I’d heard before, but did not connect him to the Hornet character. In fact, I had no idea that Bruce Lee portrayed the character on television, and that it was the Kato role that introduced him to American audiences. Really, I just knew the name “Green Hornet”, and often confused him with Green Lantern (which is insane to think about now, because The Green Lantern is terrible and this movie is not).

The titular Hornet is actually rich, irresponsible Britt Reid (Rogen), who accidentally stumbles into crime fighting after his father dies. With the ample assistance of his mechanic/barista, Kato (Jay Chou), Reid somehow manages to infiltrate an organized crime ring and out a corrupt district attorney. Imagine Bruce Wayne as an inept stoner playing hero while a Robin-Alfred hybrid does all the real heavy lifting and you’ll get the gist of Green Hornet. It sounds ridiculous, and at times it is. But for the most part this goofiness works well. It’s not perfect, but at least it’s not a direct clone of most other superhero films.

My biggest problem with this film is that it’s a tad uneven. When it’s funny, it’s very funny. But then many scenes drag on with few laughs, or feature laughable action sequences. The movie seems stuck in this weird limbo between action and comedy, and doesn’t quite succeed at either. Some of the casting is odd as well, notably Cameron Diaz and Christoph Waltz. I’ve never been a fan of Diaz, and didn’t feel as if she suited her role here (though I did like that her character is interested in Kato rather than Reid). Waltz is a great bad guy, but he’s not given much to work with here. The character has no depth, so it makes no sense why someone as talented as Waltz would be cast in the role.

Even with all its flaws I’d watch The Green Hornet again. Seth Rogen is charming and funny enough, and Jay Chou’s martial arts skills are fun to watch. I know some people out there will disagree, but part of me wishes the Green Hornet would strike again. Too bad a sequel seems doubtful.