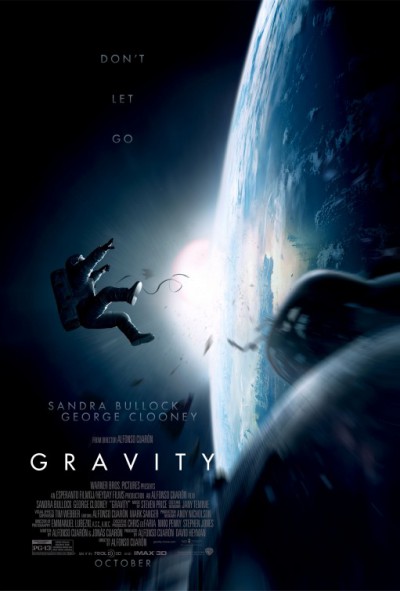 Ben
I remember seeing trailers for Gravity and thinking I could not imagine a more frightening experience. Being stuck alone in the depths of space just waiting for your oxygen to run out would be possibly the worst way to go for me. I imagine it is unlikely parts of this film could actually happen, prominent astrophysicist Neil DeGrasse Tyson has already debunked much of the plot. That doesn’t change the fact that this is a tense exciting film, played well be Sandra Bullock.

Bullock plays Ryan Stone, an inexperienced astronaut asked to repair the Hubble telescope with the help of suave experienced astronaut, Matt Kowalski (George Clooney basically playing a spaceman version of how I imagine he is in real life). Some stray debris destroy their ship, leaving Ryan and Matt stranded. They must make it a nearby space station before their oxygen runs out.

This is edge of your seat stuff. I don’t care if this could or could not happened, the film is so well done, you believe it could. Director Alphonso Cuaron has crafted a technically beautiful film, the shots of outer space are amazing and add to the grandiose feeling that Gravity creates. It is also a terrific performance from Bullock. She carries this film and was rightly praised for her performance. Clooney has a very minor role, but he is still charming, just as he always is.

Gravity is able to bring one of my worst fears to life, creating an edge of your seat thriller with top notch performances from everybody involved.

Sally
Some people totally love spending two hours on the edge of their seat, waiting for something to pop out of the shadows to frighten the shit out of them. I don’t. The scary movie genre is one of my least favorite. I can certainly appreciate a good thriller (Alien and Halloween are both great films.), but as a general rule I tend to avoid them. I also do not like outer space. The universe is an interesting place, and I love hearing about space exploration and discovery. Just don’t show me images of space. They creep me out.

So why on earth would I voluntarily see Gravity in theaters? By all accounts, this should be a film that I’d absolutely hate. The trailers alone made me queasy. But everyone was raving about it, and my curiosity got the better of me (though we did pass on the 3D experience). I’m really glad that it did, because this is a great movie.

Obviously this is a tense film to watch. The entire premise is that Dr Ryan Stone (Sandra Bullock)– the only survivor when the space shuttle Explorer is destroyed by a debris field– must make her way back to earth. As an astronaut on her first mission, she seems to be up against insurmountable odds, battling everything from a low oxygen tank to entangled Soyuz modules. Every time she is shown flailing through space, desperately trying to grab ahold of something I was holding my breath. I was not entirely convinced that this was a movie that would end happily, which was a good thing. The uncertainty adds to the suspense, and makes it a much more compelling story.

Another aspect of Gravity that surprised me was the length. This film clocks in at 91 minutes, which is downright short in this day and age. I appreciate the succinctness of the story; there is nothing extraneous, but nothing feels like it’s missing either. There are a few filmmakers who could learn a thing or two from this movie. It has action, character development, suspense, and amazing special effects, all working together to create one of the best films of the past decade.