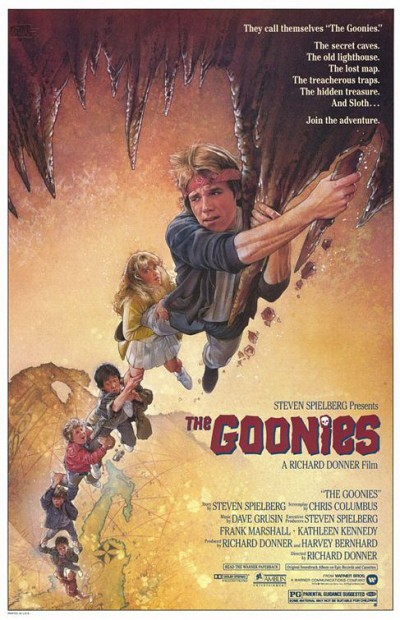 Ben
The Goonies will always have a special place in my heart. Many Saturday afternoons of my childhood were watching this film with my father. This was a dream come true for any kid. What little boy didn’t dream of going on an adventure with his friends to find some lost pirate treasure? This film captures that excitement so well, and even nearly 30 years later The Goonies is still brilliant. It’s also still relevant (my nephews love this movie), because going on an adventure with your best friends will always be a dream for little boys. The Goonies captures the spirit and excitement these kids are feeling better than most adventure films. It is also not mind numbing for adults either. There is enough excitement to entertain the entire family.

The Goonies follows four young boys (Sean Astin, Kee Huy Quan, Corey Feldman and Jeff Cohen) spending their last weekend together. They’ll all be moving after this because their houses are being turned into a golf course. While rustling around Mikey’s (Sean Astin) attic, they discover an old treasure map and decide to go and attempt to find it. Along with Mikey’s brother, Brandon (Josh Brolin), and two of his girl friends (Kerri Green and Martha Plimpton), they eventually discover a underground cave that may lead to all of their dreams come true, but only if they can avoid the dastardly Fratelli family (Anne Ramsey, Robert Davi and Joe Pantoliano).

This is a classic adventure story. It was one of my favourite films growing up, and continues to be one of them as an adult. I can’t wait to show this film to any children I might produce one day. The chemistry between the child actors is so good, they are funny and charming. Nobody really steals the limelight of this film, it is a true ensemble cast. Highlights definitely include the truffle shuffle for me, anybody who has seen the film knows what I’m talking about. I spent weekends talking some of my more rotund friends into doing this move. I’ve also read that Jeff Cohen, the truffle shuffler himself, used to do the move at football games while he was at college. I’d give a lot to have witnessed that live.

The Goonies is a charming adventure film that perfectly captures every little boys dream and brings it to life perfectly.

Sally
I’ve seen the first half of The Goonies about six times, but have only watched the ending twice. The reason for this is because this was one of the three movies that teachers in the US show on the last day of class to fill time (the other two are Dead Poets Society and The Princess Bride). Every year without fail the period would end before the movie did. Do the kids successfully outsmart the evil Fratellis? Does Andy tell Troy where he can shove his letterman’s sweater? Do they ever find the pirate One-Eyed Willy’s treasure?

These were the (not so) burning questions I was left with every year after school let out. I never bothered renting the movie, primarily because it’s predictable (Of course the kids find the treasure. What kind of a kids movie would have an unhappy ending?), but also because I was never that into the movie watching it for the first time as a teen. I was raised on Disney animation and not much else. Then around the time I turned 12 my parents started letting me watch select R-rated movies. As a result, there is a big gap in my non-animated PG and PG-13 movie viewing. Stuff like The Goonies, which most of my friends grew up with, I’m only getting around to seeing now.

The Goonies is… well it’s more than a little silly. It involves escaped criminals, a pirate treasure guarded by booby traps, a kind-hearted deformed guy nicknamed Sloth, and a group of kids who save the day. Yet there’s just something incredibly lovable about this gang of misfits. In fact, I think that I enjoy this movie so much now precisely because it’s so silly. I can laugh at the special effects and plot holes while still enjoying the film for what it is– adventure geared towards kids.

Still, part of me thinks that I would have really loved this movie as a kid. I spent a lot of time playing in the woods behind our house in Maine; building forts and makeshift bridges, and stomping down trails to connect them. I can only imagine the games my sister and I would have invented if we’d been introduced to this gang at a younger age. For this reason alone I will definitely make sure my future kids see this film before they’re too old to find it cool. It also has some great lessons about never giving up and believing in yourself that will seep into their brains as they enjoy the adventure.