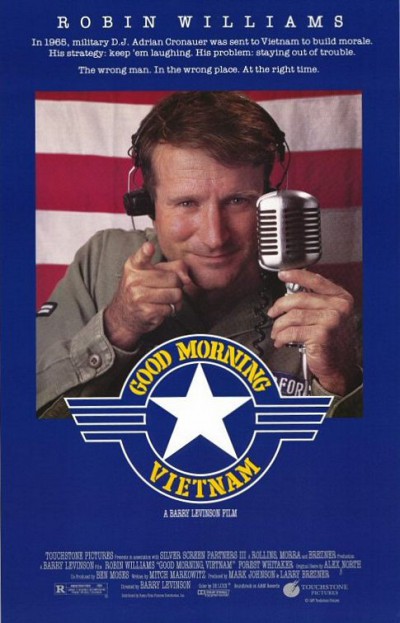 Ben
There is probably only one reason to watch this film: To see Robin Williams ad-lib his way through the radio shows his character plays. It is a joy to watch a Robin Williams in his prime be given free reign to be hilarious. The setting of Vietnam also allows for some very pretty scenery.

Williams plays Adrian Cronauer, an eccentric DJ assigned to USA armed services radio station in Vietnam. He shakes the normally placid radio show up, angering his superiors, but bringing the troops untold enjoyment. Adrian eventually becomes involved with the Vietnam community, meeting a girl (Chintara Sukapatana) and meeting her family. He sees things in the streets that he wants to report on in radio show, but his superior officer (J.T. Walsh) won’t let him, causing conflict between the pair. Adrian must get his message across to the soldiers, even if it means upsetting the higher ups.

Like I said, the best part about this film comes early on when Robin Williams first starts doing his radio show. This is Williams at his best. Lightning fast and hilarious. The film is still interesting enough when Williams isn’t being a DJ, but you definitely feel a drop off when Williams hits the streets outside of his radio show.

Good Morning, Vietnam is an entertaining film, it is a real pleasure to see a talent like Robin Williams at the top of his game and in his prime.

Sally
I’m surprised how great this movie is. The Vietnam War doesn’t exactly make me think “comedy goldmine,” but Good Morning, Vietnam perfectly balances laughs with the more serious issues surrounding this conflict. Plus, it has some great Robin Williams improv, which is always welcome.

The brilliance of this film is that it doesn’t get too much into the politics surrounding the actual Vietnam War. Most depictions of this time in American history are politicized one way or the other, using the characters as mouthpieces to make some broader statement. Good Morning, Vietnam doesn’t do this. Yes, Adrian Cronauer (Robin Williams) states that he is anti-war, but his main priority is bringing joy to the troops stationed in the country. He may poke fun at his superiors and Vice President Richard Nixon, but he means no ill will. He just wants to make people laugh, and nothing makes people laugh like jokes at the expense of humorless politicians and military brass.

While Williams’ improvisations as a wacky radio DJ are the real highlight of this film, his ability to carry the more serious plot lines is also excellent. It’s easy to see why he received a Best Actor nomination for this role. Comedies have been underrepresented at the Oscars for decades, so it’s a pity Williams didn’t win because that might have opened the door for other comedians to be honored for being funny.