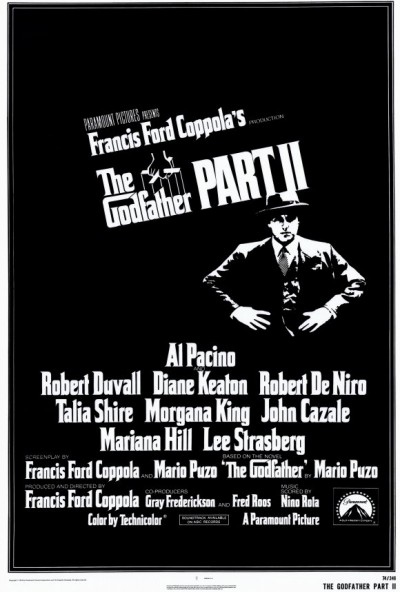 Ben
I was a bit apprehensive to watch this film. Like the original Godfather, I’d never seen it before, and only ever heard amazing things about this film. This sequel is always mentioned in the same breath as other follow ups that exceeded the original, like Empire Strikes Back or Terminator 2. was very worried that there was no way this film could live up to the hype. I also knew the way the movie played out where it basically tried to tell two different stories: the rise to power of a young Vito Corleone (Robert DeNiro) in the 1920s and the story of his son Michael (Al Pacino) consolidating his power in the 50s and 60s. I was concerned about when this film would be jumping back and forth with timelines. If I was really into Michael’s story, I didn’t really want to be leaving that to go and see Vito’s story continue. My worries were for nothing though. The Godfather 2 excels in every way, it is superior to the brilliant original and handles the timeline jumps really well. When the film jumps back or forward in time, it is almost like you need a break from that story. The film is almost five or six small short stories, three that feature Vito, and another three for Michael, and then they merge together for one final scene.

As in the first film, this is Pacino’s movie. I am just amazed that he did not win an Oscar for this film. It makes absolutely no sense to me that he only has one Oscar at home, for a movie (Scent of a Woman) that you could argue was one of his more mediocre performances. It felt like when he won for Scent of a Woman, the Academy was almost giving him a lifetime achievement award to make up for all the times they’d overlooked him. I felt the same thing when Denzel Washington won for Training Day. That was a good film, but it’s not as if Denzel hasn’t been a million times better in previous roles and been overlooked time and again. Back to Godfather though, I really loved Pacino in this. I’ve not seen much of his earlier work, but am starting to see why he was considered, along with DeNiro, one of the best actors in the world for such a long time. It was amazing how he was able to portray this Mafia man so well. Pacino is able to be charming when he needs to be, but also friggin terrifying too. I have become accustomed to the Pacino I know now that is more famous for screaming than anything else. What I enjoyed about this role is that he rarely loses his temper at all. He is calm most of the time, but you still know not to mess with him. His performance is so good.

I must admit, the Vito story did not grab me as much as Michael’s, but it was still very well done. DeNiro is great as a young Marlon Brando. His story shows his rise to power in the 1920s from homeless immigrant to Mafia Don. I enjoyed the younger actors they cast to portray older men from the original movie. Some of them are spitting images of the older actors who portrayed the same character in original movie. My favourite scene of the whole film though is the last one. It is set a few months before the first film and shows the family preparing to celebrate their father’s birthday. After seeing how ruthless Michael had become, it was such a nice touch to remind the audience that he was once this wide eyed young man who wanted no part in his family’s business and was about to enlist in the army. It was also fun to see James Caan back as Sonny. He is great in the role.

Sally
I fully expected this movie to suck. I mean, where can you really go from The Godfather? That film stands on its own as a complete story. There would be more stories to tell as Michael Corleone continues to run the family business, for sure, but a sequel could have been so unnecessary. Somehow Francis Ford Coppola managed to create a compelling film by blending two narratives– one continuing Michael’s story several years after the first movie ends, and the other telling the story of Vito Corleone immigrating to America.

The dual narratives are what really sells this film for me. The Godfather is a story of endings and beginnings, specifically Vito Corleone (Marlon Brando) ending his reign as a mafia Don and passing the torch to his youngest son, Michael (Al Pacino). I was skeptical that a “middle” story about Michael could work, and honestly, his story didn’t really interest me much outside of a few key scenes. What really got my attention were the parts that focus on a young Vito (Robert De Niro) leaving Sicily and rising from a poor immigrant to a semi-legitmate businessman in New York City.

It was interesting to see where the Corleone’s got their start. The first film introduces us to the family when Vito is already an old man, but gives no indication of how he came to be a respected mafia leader. There are many scenes in Part II that directly inform actions and attitudes in the first movie. This film establishes Vito as a defender of the people, protecting them from those who wish to take advantage of their situation. He kills a local Don who extorts Italian immigrant business owners, and begins providing actual protection to his neighborhood without demanding payment. While I’m still conflicted about the glorification of mafia culture, Part II does an excellent job of creating empathy and respect for a man who is providing assistance to people in need despite probably never receiving assistance himself.

Michael Corleone’s life as Don is not as interesting to me. Outside of a few key scenes I was mostly bored. This half of the story is a lot of political jostling between the Corleone’s and other mafia families, giving a glimpse into their dealings in Florida, Nevada, and pre-revolution Cuba. Yet the most memorable moments involve family Michael’s interactions with his family members. One such moment involves his wife, Kay (Diane Keaton), revealing that she had an abortion after learning she was carrying a son. This pushes Michael over the edge, but not because of some moral anti-abortion sentiment. Kay is Michael’s last link to his pre-mafia life and helps him maintain the delusion that he’s still a good guy wrapped up in a world he doesn’t want to be a part of. But now he must admit that he pulls the strings, and that his actions have put his family in jeopardy on multiple occasions.

The other moment is the murder of Michael’s brother, Fredo. Oh, Fredo. I get that he betrayed Michael, but once he’s brought back into the fold he’s no longer a threat. Fredo is genuinely sorry and loyal to Michael. So when he ordered the hit against Fredo I completely lost all sympathy for Michael. This is purely an act of revenge, turning him into a real monster. He has now gone further than his father ever would have, destroying his family instead of building it up.

As great of a movie this is, I almost wish it were completely devoted to Vito Corleone’s immigration to America. At the same time I’m not sure splitting these two stories would have worked. A prequel on its own could have been great, but the storyline involving Michael may have felt incomplete given that a third Godfather film was not planned at this time. I suppose the juxtaposition of Vito’s humble beginnings and Michael’s slow destruction of the family would be lost if the two stories were separated.