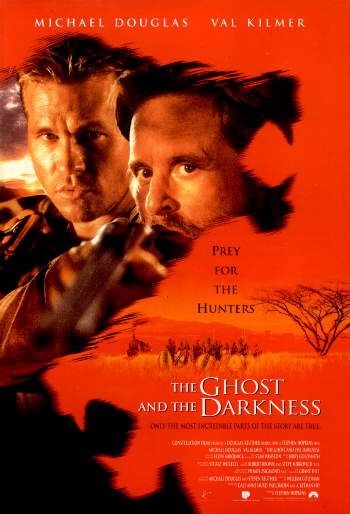 Ben
My first question after watching this film was ‘how the hell did Michael Douglas get top billing over Val Kilmer?’ Douglas turns up halfway through the film is not much more than a cameo, yet somehow he appears on the DVD cover before Val Kilmer who is in nearly every scene of the film. It’s not like Kilmer wasn’t a name, he was just coming off playing the caped crusader in Batman Forever, so he definitely had star power. Regardless, this film about a bridge engineer and a hunter who attempt to take down two giant lions in Africa during the late 1890s is an entertaining film. The biggest negative being that the film tries too hard to be a horror movie, but can’t quite create the level of suspense required.

Val Kilmer plays Colonel John Henry Patterson, an engineer sent to Africa to finish a bridge that is really behind schedule. He arrives to find the locals are spooked by a lion that has been hunting in the area. His workers refuse to work until the lion is killed, so Patterson sets out, with the help of experienced hunter, Charles Remington (Douglas), to find the lion and kill it before it murders all of his workers. Patterson eventually realises there is more than one lion in the area, making his job infinitely harder than first expected.

The Ghost and the Darkness is entertaining, made more so by the fact that this is supposedly a true story. The epilogue makes a point of telling the audience where they can find stuffed versions of the lions that were killed. Douglas and Kilmer work well together, in the minimal screen time they share. It is easy to see why Douglas became such a popular leading man. There is something about his swagger and charisma that just makes you like him, even if he is playing a jerk. Kilmer is good in this. I don’t think he will ever top his work as Doc Holiday in Tombstone. That is one of my favourite movies and mostly because of his performance.

I really liked that they used real lions in this film, only one shot is done with an animatronic lion, the rest are all done using the real thing. It adds to the quality of the film. My only real complaint is that the movie tries to be a suspenseful horror film, but it isn’t able to create the atmosphere required. I rarely felt the characters were in danger, which is funny because they definitely were. It just did not come across on screen that well.

The Ghost and the Darkness is an ok film with two solid leads that makes good use of its animal co-stars. It struggles to create enough suspense and tension to be considered really good, though.

Sally
The Ghost and the Darkness is a gem that my dad and I discovered on television one afternoon. We both like movies based on true stories, even when they are heavily fictionalized and exaggerated such as this one. We also have a soft spot for movies where people are being stalked by animals. In fact, I was first introduced to my favorite movie, Jaws, by my dad in a similar fashion.

It would be fair to describe this film as Jaws in Africa. The story follows John Patterson (Val Kilmer), an engineer who is desperately hunting two man-eating Tsavo lions so he can complete the construction of a train line through East Africa. When he is unsuccessful, a professional big game hunter (Michael Douglas) is brought in to assist. The professional is killed by one of the lions, and it is up to Patterson to finally catch their prey. Both movies are human vs. nature stories, where a killer animal threatens the financial interests of thoroughly urban men who do not respect the animal’s power.

While the story is similar to Spielberg’s shark classic (and both are inspired by real events), that’s really where the comparisons end. The Ghost and the Darkness doesn’t hold a candle to Jaws. The real failure here is the lack of tension in most scenes. An attempt is made to make the film frightening, however it never quite succeeds. There are a few instances when I really feared for the lives of the characters, but for the most part I never believed they were in any actual danger. This is a problem for a movie that centers on man-eating lions– you need to truly fear the animals.

Even with its failings, I still enjoy this movie.  Kilmer and Douglas put in some solid performances, but really, it’s the history aspect that keeps me coming back. The real life lions are now mounted and displayed at the Field Museum of Natural History in Chicago, which I find incredibly sad. These were animals doing what animals naturally do. They just had the bad fortune of running up against British imperialism. It’s a bit deflating to think that they are now trophies, tributes to colonialism that has all but ruined an entire continent. (I guess what I’m trying to say is that I secretly root for the lions each time I watch this movie.)