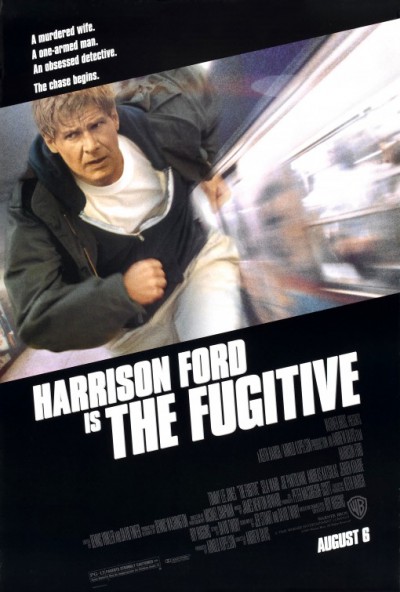 Sally
Harrison Ford didn’t kill his wife, and Tommy Lee Jones doesn’t care. For the longest time that was all I knew about The Fugitive. Like, did you know this was based on a TV show?I didn’t. In fact, I don’t even know how this story could be sustained over multiple seasons. But it works perfectly as a movie, and is probably one of the most successful TV-to-film adaptations ever made.

What I liked most about The Fugitive is that there are really two heros, and one of them would be the villain in any other chase film. Harrison Ford stars as Dr. Richard Kimble, a man wrongfully accused of murdering his wife. He is able to escape from the bus taking him and other inmates to prison, and begins piecing together who actually killed his wife while being pursued by U.S. Marshall Samuel Gerard (Jones). By all accounts Tommy Lee Jones should be the villain of the story, but he’s not. He’s just a guy doing his job. I actually didn’t know who to root for in some scenes, because both men have completely reasonable motivations for what they are doing. It would have been so easy for the screenwriters to make Jones’ character corrupt or power hungry or even just a complete jerk, but he’s not. This is such a different dynamic than other cops vs. criminals films, where the criminals are actually terrible people but so much more likable than the police pursuing them (Bonnie & Clyde, Public Enemies).

I’m always really impressed by The Fugitive, but I actually had no idea that it was nominated for seven Oscars, including Best Picture. This isn’t the type of movie that would typically receive such an honor, but this is such a well made movie that the accolades are completely deserved. This isn’t a chase movie where the police are inept or the pursued has unexplained talents that aid him or there are a million near misses. Everything– save Harrison Ford jumping from that dam– seems plausible or makes sense for the characters. The Fugitive is much smarter than most films of the genre, and always exciting to watch.

Ben
One thing I learned while watching this film was that it was really successful. I didn’t realise The Fugitive was nominated for Best Picture at the Oscars. I knew Tommy Lee Jones won Best Supporting Actor, but wasn’t aware the actual film got some love also. I enjoyed The Fugitive, it is one of the few movies where the audience struggles to decide who they want to win. On one side, there is Richard Kimble (Harrison Ford), a surgeon who is wrongly accused of killing his wife and is on the run trying to find the real killer. On the other side you have bulldog U.S. Marshall, Samuel Gerard (Tommy Lee Jones), who is assigned to catch the fugitive. Both of these characters are so appealing, you really want them both to succeed, if possible.

This film is sold on the personalities of the two leads. Harrison Ford and Tommy Lee Jones make this film work. They have minimal scenes together, but still have terrific chemistry. I found the story very engaging, and the plot does a good job of keeping things hidden until the audience needs to know about them. Ford is charismatic and endearing as the husband accused of killing his wife. This is Harrison Ford in his prime and at the top of his game. Tommy Lee Jones is also charismatic, but his character is very different to Dr Kimble. His blind devotion to his task makes him a compelling character. You understand that he is a man just doing his job. He does not care if Kimble is guilty or innocent, but he’s been assigned to bring him in, and he will do everything in his power to do so. The character had the chance to be a generic bad guy, but he is played so well by Jones, you really start to like him by the end, despite the fact if he succeeds, it means Kimble has failed.

The Fugitive is a fun movie that still holds up today. Great performances from the two leads make this film more than just an action film. Both Harrison Ford and Tommy Lee Jones are great in their role and deserve the praise they received. Especially Jones, who is able to make what would ordinarily be the villain of the piece, into someone the audience is rooting for.