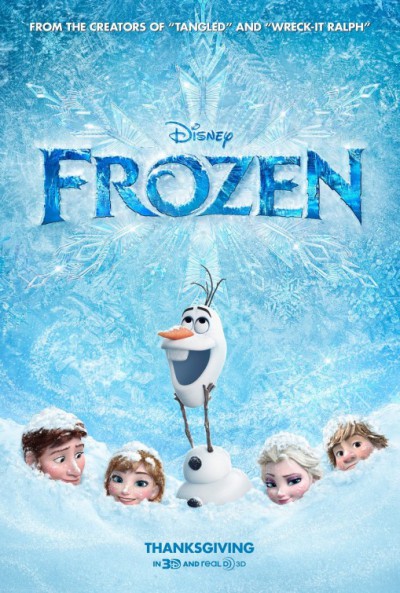 Sally
Ask any woman between the ages of 27 and 35 to sing “Part of Your World” from The Little Mermaid, and I guarantee she will know every single lyric of that song. This was my generation’s anthem, one that appealed to us as little girls because it was sung by a pretty mermaid, all the while sowing the seeds of rebellion in our little subconscious minds. So the first time I heard Frozen‘s mega-hit “Let It Go”, I couldn’t help but tear up and smile at the same time. Disney was at it again– covertly creating a new legion of headstrong women through the power of song.

For me, Frozen is all about the music, much the same as The Little Mermaid is. “Let It Go” may be the song that inspires, but “Do You Want to Build a Snowman?” is the song that most touched me. This is the sequence where younger sister Anna desperately begs her older sister, Elsa, to come and play like they used to, before Elsa became reclusive and stopped talking to Anna. So many tears in theater, and not just from me. At the end of the song I heard a little girl sitting nearby innocently ask her mother, “Why are you crying?” Oh, little girl, someday you’ll understand (unless you’re an only child). You’ll either be the older sister shutting your younger sibling out, or you’ll be the younger sister wondering what you did to make your older sibling want nothing to do with you. This song hit me particularly hard as I’ve been living in a different country than my sister for several years. We’re finally at a point in our lives when we actually get along (hello, adulthood!), but we’re now separated by the Pacific Ocean instead of a locked door. Life is really unfair sometimes.

The rest of the movie’s music is more lighthearted, but incredibly catchy. I especially loved “In Summer”, a song about what (sort of) happens to snowmen in Summer. Josh Gad, who voices Olaf the Snowman, is delightful and really sells what could otherwise be a failed attempt at comic relief. Another highlight was “Love is an Open Door”, which playfully pokes fun at typical fairytale romance and sets up the revolutionary-for-Disney subplot of Elsa objecting to Anna’s engagement on the grounds of “you can’t marry someone you just met.”

I’d be remiss to not mention the anti-fairytale plot points in Frozen, but so much has been written about them already. It’s great that Disney is expanding the definition of true love and tearing down the tropes that they used to rely on, but I feel like people are selling some of the studio’s former heroines short. We wouldn’t have Elsa’s declaration of independence without Ariel’s earnest wish to be part of a world where she was respected and allowed to thrive. Anna wouldn’t be able to sacrifice herself for her sister if it weren’t for Belle sacrificing herself for her father first. Elsa’s objections to Anna’s ill-conceived engagement are applaud worthy, but Giselle already figured out that dating somebody before marrying him is a smart move. A lot of people see Frozen as an out-of-nowhere revelation, but anyone familiar with Disney knows that these two princesses owe a lot the heroines of the past three decades.

Still, it’s great to see a Disney movie that wraps thoroughly contemporary ideas in a beautifully animated package. Frozen proves that the studio can stick to what’s made them successful– music, comic sidekicks, fairytales, etc.– while telling a story that’s relevant to today’s audience. After this and Tangled, I’m finally excited to watch Disney movies again.

Ben
From the late 80s to early 90s, Disney animation was first introduced to me. I had seen a few of their older films, but it wasn’t until things like The Little Mermaid, Beauty and the Beast, Aladdin, and The Lion King when I really started to appreciate Disney movies. After that run of hits, Disney kind of started to lose its lustre a little bit. They started focusing more on their Pixar films (not that I blame them), and their traditional animated movies began to suffer. Films like The Hunchback of Notre Dame and Hercules were released in the mid to late 90s, and while they were still good, I don’t think anyone will argue they deserve to be mentioned in the same breath as Aladdin or Beauty and the Beast. Disney animation was largely replaced by Pixar until 2007 when the House of Mouse made John Lasseter director of all of their animation. Lasseter had been the brains behind many of the more successful Pixar films (Toy Story, A Bug’s Life) and was now in a position to resurrect Disney’s traditional animated films. The first film released under his leadership was The Princess and the Frog. I haven’t seen this film, but have only heard good things about it. Their next big animated film was Tangled. This film rejuvenated a dying medium. It had all of the heart we had come to expect from Disney films and could easily be held alongside those films from the early 90s heyday. The next film released was Frozen.

Frozen is another film able to be compared with the classic Disney films of a generation earlier. The characters are funny, the songs are catchy and there is an important message about family and sisters weaved throughout. Frozen is the story of two princess sisters, Elsa (Idina Menzel) and Anna (Kristen Bell). Elsa develops the mutant powers of Iceman and can create and control ice. She has minimal control of these powers though, because she never attended Xavier’s School for the Gifted. She causes an accident with her younger sister and her parents become scared and force Elsa into her room. Elsa is too scared to ever come out incase she hurts someone again. She is forced to come out of her seclusion when her parents die and she must be crowned queen. During the ceremony, her sister announces she has fallen in love with the handsome Hans (Santino Fontana) and after a day courtship, she intends to marry him. Elsa will not allow her sister to be so impulsive and loses her temper, freezing all of the land and running off to a frozen castle she creates. Anna must set out to find her sister and mend their relationship, with the help of a suddenly out of business ice salesman (Jonathon Groff), his reindeer, and an enchanted talking snowman (Josh Gad).

Frozen has everything you expect from a Disney movie. It is a charming film with great characters, even better songs, and enough laughs to keep adults engaged also. Frozen has become a cultural phenomenon since its release and it is easy to see why. There has been few movies in the past couple of years for little girls to enjoy. Many of the more popular films have been focused at boys (The Avengers, Transformers, etc.), so little girls dreaming about being a princess latched on to this film very quickly. The fact that Frozen is not completely painful for parents to watch helped its appeal. I am a big fan of this film, even though I am clearly not its target market. The fact that someone like me can appreciate Frozen says a lot about its appeal.

Frozen is a big return to form for Disney animation. It is a funny, charming film with a strong message about sisterhood that can be enjoyed by people of all ages.