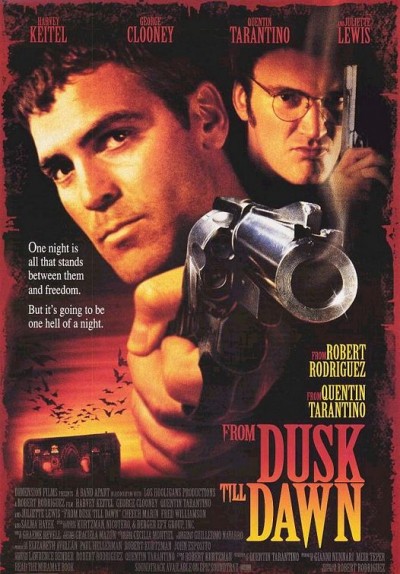 Sally
Before we watched From Dusk till Dawn Ben asked me if I had ever seen it before. When I answered no, he laughed and replied, “This is a really weird movie.” He was not wrong.

I was totally into the first half of this movie. The film starts off following two brother bank robbers, Seth (George Clooney) and Richie (Quentin Tarantino), as they make their way to a safe house Mexico. Richie is psychotic, making a lot of needless trouble for the two in the form of needless murders. Meanwhile, a former preacher (Harvey Keitel) and his children (Juliette Lewis and Ernest Liu) are traveling cross-country in a motor home. The family crosses paths with Seth and Richie, who force them to drive the brothers to Mexico. The tension created when the brothers are in the same close quarters as this innocent family is great. I was riveted, wondering how all this was going to play out. Then the movie took a sharp left turn into bonkersville and I lost interest.

Once they all arrive at the safe house, a bar/brothel/club known as the Titty Twister, things quickly go downhill. Out of nowhere it is reveled that this is no ordinary bar. This is a bar owned by vampires, who use it to lure truckers to their death. This reveal comes completely out of nowhere. If there was any foreshadowing, it went right over my head. The rest of the movie is your standard horror-action flick fare, which I found mostly boring and uninspired.

I don’t mind movies that switch gear or have an out-of-nowhere reveal at the end, but it’s got to be done right. Two great examples of this are The Prestige and The Sixth Sense. These two were successful because they feel like the same movie even as they suddenly switch gears. From Dusk till Dawn feels like two different movies randomly stuck together with no common thread running throughout. Not even George Clooney can save this.

Ben
This is such a strange film. It is almost two movies in one. The first half about two criminal brothers (George Clooney and Quentin Tarantino) on the run, then the second half is a vampire slasher flick. Both sides of this film have their moments, but it does really feel like it should be two separate films.

The film opens with Seth (Clooney) and Richie (Tarantino) Gecko trying to cross the border into Mexico after committing a variety of robberies in Texas. They kidnap a former preacher (Harvey Keitel) and his two kids (Juliette Lewis and Ernest Liu) and force them into helping get the Gecko brothers across the US border. The preacher reluctantly agrees after Seth promises no harm will come to his family once they are in Mexico, and they begin their journey across the border. After making their way into Mexico, the group stops at a bar called the Titty Twister. In this bar, all hell breaks loose as it is inhabited by a legion of vampires, led by the seductive Santanico Pandemonium (Salma Hayek). The loiterers within the bar who survive the first attack must fight their way out of the bar, or at least survive until sunrise when they can walk out of the bar freely.

I’m not sure if this came across in the description I just wrote, but this really does feel like two films. It is almost like they didn’t have enough material for two movies, but had two awesome half films. Tarantino was a producer on this film, and he is known for his quirky behaviour, and this might be just another example of that.

The acting in this film is ok. Clooney was still doing ER when he made this film, so he was definitely not the bonafide movie star he is today. Tarantino should stick to directing, and I’m pretty sure Keitel lost a bet with someone to end up in this. It is ok, there is some good action sequences when the vampires first attack, but this is not much more than a glorified B grade film. It has attained cult status because of the appearance of Clooney and the fact that Salma Hayek looks amazing (which she absolutely does). The biggest problem with this film is that just when I felt involved with the Gecko brothers and their story, everything gets turned on its head and becomes a slasher flick.

This cult movie is ok, worth watching only to see a young Clooney and a very hot Salma Hayek.