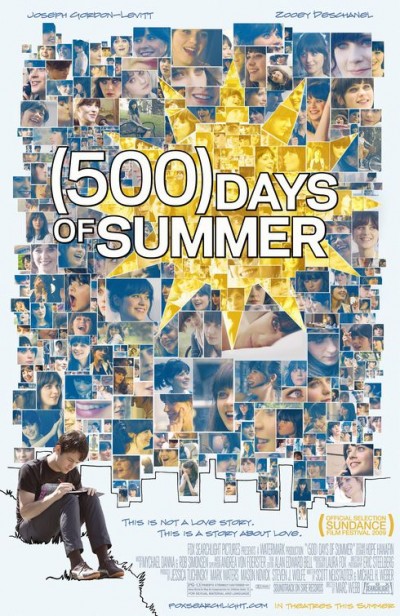 Sally
500 Days of Summer is the most honest romantic comedy ever made. It takes everything from the traditional chick flick formula and flips it upside down to great effect. This is the story of a relationship that is doomed from the start, where the guy doesn’t get the girl, and traditional gender stereotypes are reversed.

Joseph Gordon-Levitt is Tom, a hopeless romantic who falls head-over-heels for his coworker Summer (Zooey Deschanel). Unfortunately for Tom, Summer doesn’t believe in true love, nor does she want a boyfriend. This reversal of gender roles seems too perfectly swapped on the surface, but 500 Days does a great job of providing depth to the story, if not to its female lead. While the character of Summer lacks development, this is probably because it’s not really her story. This is Tom’s vision of her– a perfect woman who embodies all of his hopes and desires. Except that she doesn’t. Tom and Summer want completely different things out of life, he’s just too wrapped up in his fantasy of her to see it.

One of my favorite things about this movie is its non-linear story telling. 500 Days jumps around in time, providing title cards to inform the viewer what day in Tom and Summer’s relationship we are seeing. The audience is told right at the beginning that the two will eventually break up, and from there scenes of happiness and despair are juxtaposed to show the cracks in the relationship forming. We are also treated to fun sequences involving Tom’s inner fantasy world, including a dance number and a split screen showing his expectations versus reality when attending a party thrown by Summer. These quirky scenes fit perfectly into the tone of the film, but are restrained enough to not overwhelm the story.

In the end, what really sets 500 Days apart from other rom-coms is that the guy doesn’t get the girl in the end. On my first viewing I was expecting them to get back together, but was pleased that they didn’t. Tom is nice and all, but I was never rooting for him and Summer to wind up together. Their break-up is very realistic, something rarely shown in films. Having gone through a break-up where essentially the same post-split events occurred between me and my ex as they do between Tom and Summer, I appreciated seeing an experience similar to my own translated to screen in such a great way. And while I have no desire to have a post-mortum with my ex as Tom and Summer do, this scene was satisfying to watch because it’s more or less exactly how I would have wanted a real life interaction to go.

All told, 500 Days of Summer is one of the better relationship films made in recent memory. Sometimes it’s nice to see something more realistic, even if it doesn’t have a typically happy ending.

Ben
This was an interesting film. I really liked the role reversal from typical gender roles. In 500 Days, Joseph Gordon Levitt is the one looking to settle down, while Zooey Deschanel is just looking to have some fun and no commitment. It is so common for this to be the opposite. 500 Days of Summer was a really interesting look at a relationship doomed to fail from the start.

Joseph Gordon Levitt plays Tom, a greeting card writer (whose boss is Agent Coulson). His relationship with office receptionist, Summer (Deschanel) has recently come to an end, and while depressed, Tom reflects back on the year and a half (500 days) they spent together. The film chronicles their first meeting where Summer clearly explains that she does not believe true love exists and is not looking for any relationship whatsoever. Despite this, Tom can’t help but fall for her and the two enter into a relationship. Along the way, there are many highs and lows for the two, to the point that where this most recent break up has occurred, many of Tom’s friends are not interested in this debacle, as they’ve heard the story one too many times before. This quirky comedy chronicles their up and down relationship to its conclusion.

I really like Joseph Gordon Levitt, I will watch anything that he is in. He has become so much more than space alien teenager Tommy Solomon now. He is one of the few child actors to branch out into adult fame and it is really interesting from my point of view, as he is one of the few child stars I actually remember watching growing up. Most of the others child stars I followed are not really relevant anymore, JGL is the only one still with a career, as far as I know. My biggest problem with this film was Zooey Deschanel. I just didn’t buy that she was so amazingly attractive that Tom would go against everything she has said up to date and still try to date her. She did not have that good of a personality, nor was she some bombshell knockout in the looks department that would justify Tom throwing caution to the wind the way he did to pursue her. I didn’t believe her character and I feel like she let the film down. Don’t get me wrong, Deschanel is cute, but that’s it. She is basically just playing her character from New Girl, and I didn’t buy that she would be Tom’s object of affection the way she was.

I did like the format of the film where their relationship ends right at the beginning and is told in flashback form. It was an interesting take in what could have very easily been a generic romantic comedy. JGL is solid as the lovestruck Tom, but he is letdown by an uninspired Deschanel who feels incredibly miscast in this film. 500 Days has a real nice indie soundtrack which, along with the performance of Levitt, is still unable to raise this film much higher than a regular romantic comedy.