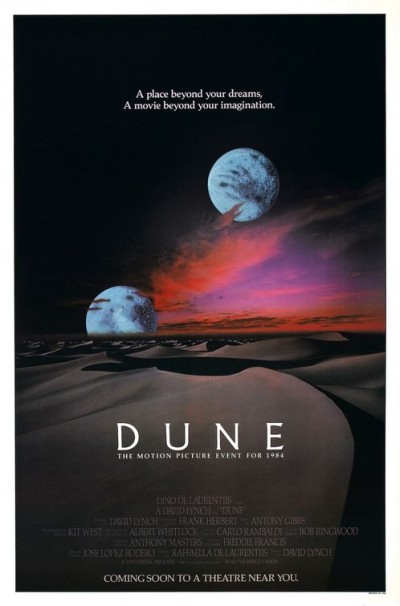 Sally
Dune is a mess from start to finish. I could barely follow what was happening, and was bored about two minutes into the opening narration. If you’re going to use the word “spice” seven times in such a short span of time you better be Jamie Oliver or Geri Halliwell. Otherwise I just don’t care.

This entire movie revolves around the production of the magical spice melange. The spice does everything: it enables space travel, extends life, expands consciousness, makes you well liked amongst your peers, lets you dunk like Michael Jordan, and gives longer lasting erections. The only thing I doubt it could do is make this movie watchable. The whole thing is really choppy and boring.

I feel really embarrassed for Kyle MacLachlan, who stars as some weird blue eyed messiah named Paul. He’s delightful in Desperate Housewives, Sex and the City, and Portlandia, but I have a hard time watching him here. I guess it just goes to show that true talent can’t be held back by a subpar start to one’s career. Oh yes, I forgot to tell you– Sting is also in this movie, which is… actually that one kind of makes sense. It’s actually surprising he hasn’t popped up in more subpar science fiction films.

The biggest issue with Dune is that it just seems too epic to fit into one movie. I’ve never read the books, but I can tell from watching this that there was a lot cut from the story. There are scenes featuring alien technology and terms made up by the author that are not well explained. The movie has pretty even pacing until the final 45 minutes or so, then it starts skipping ahead several years and the finale feels hurried as a result.

I’m sure there are people out there who really enjoy this movie. If you’re a fan of the book I’m sure there is plenty here to please you. But for someone who is a complete outsider to the Dune universe, like myself, I doubt there’s much here for you to enjoy.

Ben
This film is widely regarded as one of the worst science fiction movies ever made. I obviously was not aware of its status a few years back when I was DVD shopping and the store I was in was having a buy two get one free sale. I found two that I wanted and could not find anything for the free third one. A friend of mine recommended Dune. I am not sure if he was being serious that this film is good or if he was playing a prank, either way, this person is a jerk who I’m no longer on speaking terms with.

I have not read the novel this film is based on, and I imagine if you had, the movie would make a lot more sense. The movie adaptation just seems to be biting off way more than it can chew. The film seems very rushed and is not able to give important plot points the time they deserve on screen. I imagine this isn’t an issue for the book, but I can’t say for sure. It just feels like a lot is either cut out or brushed over.

Dune is a space epic covering four warring families and their eagerness to control the distribution of a spice called melange. The spice aids in space travel and also enhances the psychic powers that some members of this world possess. Even as I try now to get the plot down on paper, it is very difficult to put something down that is only a paragraph long. If I try, I feel like I will end up writing pages. Neither you nor I want to put in that kind of effort, so I will end by saying this is basically the story of Paul Atreides (Kyle MacLachlan) who tries to avenge his father’s death against an evil emperor and his dad’s nemesis after he is assassinated. The special effects in this film have also not held up well. They look very amateurish by today’s standards. I know it is not fair to compare a film made in the 80s to todays, but when you really dislike a film, this is just one more nail in the coffin. I really want explained what is going on in this scene. Paul and Professor X turn into giant box men and start fighting. It is not explained at all. I just found the whole sequence laughable.

The best part of this film was the star spotting. Dune is the 80s equivalent of Demolition Man when it comes to actors that went on to bigger and better things. Patrick Stewart, Virginia Madsen, Alicia Witt, Sting, Brad Dourif, Quantum Leap’s friend (Dean Stockwell) and Linda Hunt (Arnold’s principal in Kindergarten Cop) all turn up in minor roles. It was really funny seeing these guys when they were young, especially Patrick Stewart (did he ever have hair??).

I was bored very quickly when we started watching this film. The plot is explained by a princess (Madsen), who explains what the spice is and how it works. She also explains who the four families are. This whole sequence is done with just her face on screen in front of a backdrop of stars. I really found it to be weak storytelling. She spends the first five minutes of the film explaining everything. If a plot is that convoluted, perhaps there are bigger problems with your story. This princess also ends up having next to nothing to do with the actual movie, so I’m not sure why she was chosen to explain everything when she plays almost no part in the film. I really tried to get invested in this film. When the princess’s monologue still left me asking questions, I opened the Wikipedia page to try and fill in the blanks. It didn’t really work because I really struggled to be entertained by this film. There is far too much happening here. The Dune series was turned into a six hour miniseries in the early 2000s, which I think would suit this story a lot better. There is so much being told, that just can’t be covered in two hours.