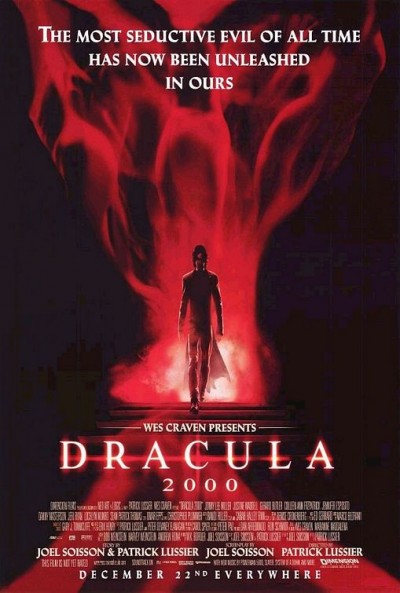 Sally
I’m hesitant to call this the worst vampire movie I’ve ever seen, only because I’ve seen all four Twilights. But at least Twilight was entertaining in that it was unintentionally funny to watch. Dracula 2000 is just unwatchable. I feel bad for everyone who appears in this movie, which includes the great Christopher Plummer as well as late 90s songstress Vitamin C.

I don’t even know where to start in describing this movie. It’s just bad. Bad acting, bad dialogue, boring premise. The only reason I can think of for why any of the actors in this signed on is because it has one good plot point/twist. Unfortunately it takes far too long to get to this point, and it’s not a big enough pay off for all the crap you’ve just had to sit through.

My recommendation is to skip this and watch Interview with the Vampire instead.

Ben
This is like a time capsule for the late 90s. Nearly everybody who was relevant during that time is featured in this film, even songstress Vitamin C (Colleen Fitzpatrick) turns up as one of Dracula’s conquests. This film is terrible, but it was a lot of fun doing some star spotting while watching it.

Dracula 2000 is exactly what it sounds like. A new version of Dracula for a new millennium. Dracula is played by a very young Gerard Butler. They have done something with his makeup though because he looks like a china doll at some stages of the film due to his pale skin. The flowing curly locks he is sporting also make him look ridiculous. I did not find him threatening at all. Christopher Plummer plays Van Helsing, after the events of the original Dracula story, he has held Dracula captive in his basement since the 1700s. Van Helsing has been using Dracula’s blood to keep himself alive all these years in case Dracula was to ever escape, he would be ready. I’m not sure why he didn’t just roll the vampire out into the sunlight and fry him though, but this is one of many problems with this story. Obviously, Dracula DOES escape, due to a thieving secretary (Jennifer Esposito) and her boyfriend (Oamr Epps) breaking into Van Helsing’s vault and inadvertently letting Dracula out of his coffin. Dracula breaks free, chaos ensues and it is up to Van Helsing and his junior partner (Johnny Lee Miller) to stop him.

As I said, the star spotting here is fun. Outside of the ones I mentioned, Jeri Ryan (the sexy borg from Star Trek: Voyager), Shane West, Danny Masterson (Hyde from That 70s Show) also show up. I’m sure they all regret being in this film. It is one of the worst interpretations of the Dracula story I’ve seen.