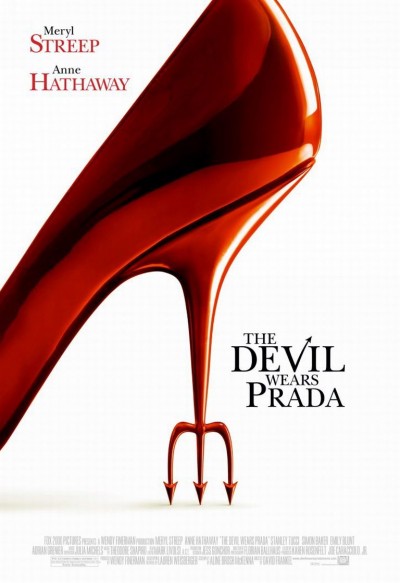 Sally
The Devil Wears Prada is from a brief period of three years or so when I actually had time to read a book before watching the movie. There’s just something nice about reading a novel and then hating the movie because it changes everything great about the book. I miss that.

Not that I hate Prada, but it does slap a somewhat happy ending on a story that ends only kind of happily, which is one of my pet peeves. Still, the cast of this movie is great, and because of that I can overlook most of the changes.

The standout here is Meryl Streep, of course. She is the titular “devil” in Prada, as fashion magazine editor Miranda Priestly. Streep is wonderful as the evil boss, throwing outrageous tasks at assistant Andy (Anne Hathaway) and creating a stressful work environment for the rest of her staff. What’s so great about her performance is that it’s incredibly understated. I don’t think Streep raises her voice once, and yet you can feel your blood pressure rise every time she speaks.

Hathaway is adorable as Miranda’s put-upon new assistant. The transformation from fashion neophyte to couture loving fashionista is nothing new for her (see The Princess Diaries), but she does it well. And at least the make over here is a tad less dramatic than in other films. Most of all, her genuine likability helps you care about Andy even when she’s making terrible decisions.

While the movie hits many of the same themes as the book, the film is somewhat quieter and less dramatic. Andy’s difficulty balancing work and her personal life is mostly confined to romance in the movie, where the book better explores how this job impacts her friendships and family commitments. When Andy finally discovers she is turning into someone she doesn’t like in the book (namely her boss), she comes to the realization herself; in the movie Miranda tells her that she reminds her of herself. Finally, in the movie Andy very quietly quits and is vindicated by receiving a positive recommendation from Miranda when applying for a new job, implying that Miranda has learned some sort of lesson. The book ends with Andy getting fired for refusing to comply with Miranda’s ridiculous demands, and subsequently telling Ms Priestly where she can shove her job “a million girls would die for.” It’s implied that Miranda never gives her former assistant a second thought, which is probably how things would play out in real life.

I understand the impulse to make the Miranda Priestly character more three dimensional and human. Streep is a talented actress, and her talents would be wasted otherwise. But in making Priestly a little more relatable it feels like the Andy character was stripped of some of her agency, pluck, and intelligence. It would have been nice to see a more bittersweet ending here, or at least to have Andy succeed without Miranda’s help.

Ben
I don’t understand everybody’s fascination with the world of fashion and I never will. We are currently experiencing an Australian tour of the royals, William and Kate, and every time Kate sets foot outside there is endless debate and coverage about what she is wearing and how you can look like her too. I don’t understand why everyone is so obsessed with how she looks and what she wears, and I never will. That being said, my ignorance of the fashion world does not prohibit me from enjoying a movie about it. The Devil Wears Prada is a very funny movie about the fictional magazine Runway. I think anybody who has ever had a terrible boss will be able to relate to this film. The acting performances are all very solid, led by the ‘phoney baloney’ Meryl Streep.

The film follows Andy (Anne Hathaway), a recently graduated journalism student about to start her career as an assistant for Miranda Priestley (Streep), the editor of fashion bible magazine Runway. If she can hold this job for a year, she will get a recommendation good enough for her to get any job she wants in journalism. Andy quickly discovers that Miranda is a demanding control freak and her new role as her assistant is a thankless job with long hours and large amounts of stress. Andy must cope with this for a year, while still trying to have a life and save her relationship with boyfriend Nate (Adrian Grenier).

This film is good. Anne Hathaway is great as the dowdy receptionist who slowly becomes possessed by the fashion world she works for. My favourite parts of this film are Emily Blunt and Stanley Tucci, both give great performances. Blunt is icy and biting as Miranda’s other assistant who shows Andy the ropes, and Tucci is always great as Runway’s art director Nigel.

One interesting story I read about this film is that there are hardly any real fashion people in it. Most members of the fashion world were scared away from appearing as they felt it could upset Anna Wintour. Wintour is the editor of Vogue, and Miranda Priestley is clearly based on her. I think it is really funny that she would have that kind of pull where people would not appear in a movie on the off chance it might upset you.

It says a lot about this movie that I have no interest in fashion whatsoever, but was still able to enjoy this film. It could so easily have just been another rom-com like Confessions of a Shopaholic ended up being, but the strong acting performances and solid chemistry amongst the leads make The Devil Wears Prada something more.